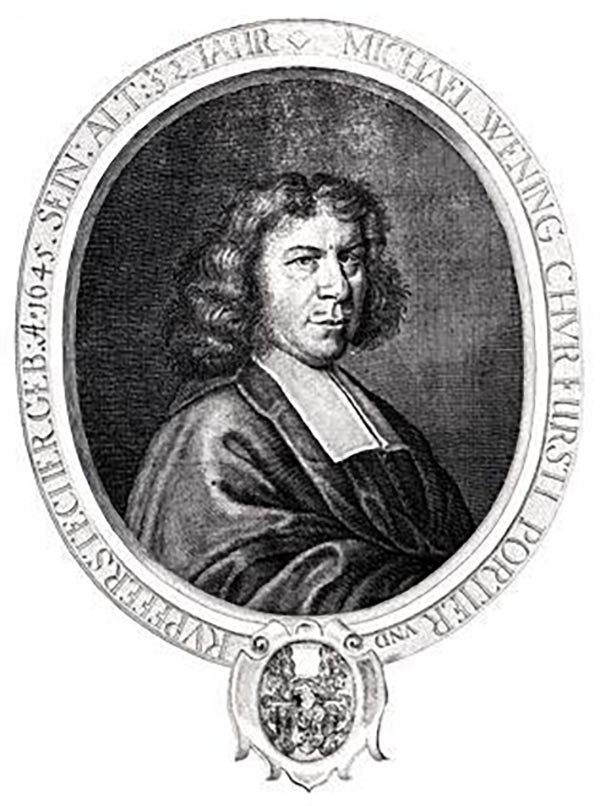 Michael Wening (July 11, 1645 – April, 18 1718) was a Bavarian engraver known for his many depictions of important places in the Bavaria of his day, including cityscapes and views of stately homes, castles and monasteries. Michael Wening was born on 11 July 1645 in Nuremberg, son of butcher and meat inspector Balthasar and Katharina Wening. Michael was the sole survivor of 13 children. His education is not known, but he did not follow his father's trade, instead becoming an engraver. He learned the art of cityscapes while working for the Nuremberg publisher Fürst and Hoffman. He left Nuremberg in the spring of 1668, and is first mentioned in Munich in December 1669, where he applied for work as a court engraver. In 1672 Wening was working part-time at the court as a quartermaster, but by 1675 he was being called court engraver.

As court engraver, he also undertook small commissions for a number of clients. He also founded a publishing company at this time on his own, producing for example an illustrated calendar. In the 1680s, as part of his duties as court engraver in Munich, produced a series of engravings on behalf of his patron Maxmilian II Emanuel, the Elector of Bavaria. These were blatamnt propaganda, celebrating the Elector's victories in the wars against the Ottoman Empire. Starting in 1696 he began work on a four-volume city atlas of the Electorate of Bavaria; the first volume focusing on Munich was published November 1701, containing 358 engravings. The work proved overly ambitious, and he ran out of investors. Moreover, Bavaria would fall under Austrian occupation during the War of the Spanish Succession: the court engraver of an exiled court cannot be expected to have flourished. Perhaps as a result of his efforts to produce the rest of his work at his own cost, he lived his last yearsi n extreme poverty. His heirs would complete the last three volumes in 1721, 1723 and 1726. The final work would contain 846 views of cities, towns, monasteries, palaces, castles and manors. The copper plates are owned by the State of Bavaria, and survive in the Bavarian State Office for Survey and Geoinformation in Munich.