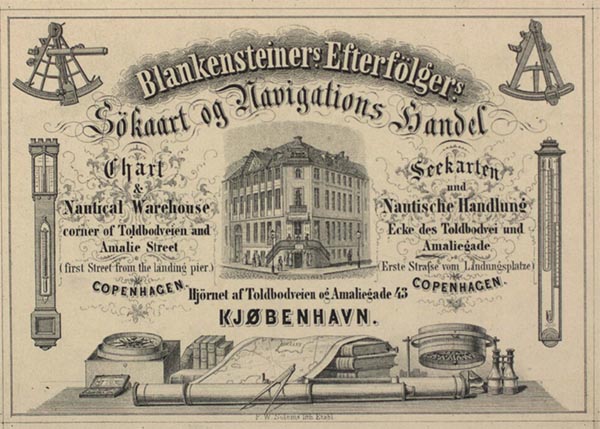 Johan Georg Blankensteiner (February 22, 1753 – May 8, 1835) was a German-Danish publisher of nautical charts, instrument maker, and nautical supplier based in Copenhagen, Denmark. Blankensteiner was born in Oberammergau, Bavaria. He moved to Copenhagen sometime around 1780. Ion 1791 he established a corner toy shop specializing in German toys at 69 Købmagergade. It seems that, from the beginning, the firm also sold nautical charts and navigation instruments. In 1792 he published a catalog of various maps and atlases. By 1803 they were a well-established nautical warehouse both producing their own charts and offering foreign charts. Sometime in the 1830s Carl August Blankensteiner (1809 - 1870), Johan Georg's son, joins the business and the firm is renamed Blankensteiner and Sons. After his death the firm continued to trade under Carl August. In 1844 the firm received a royal privilege, a kind of early copyright, by the Danish King Christian VIII, as chart sellers and instrument makers. At this time, they also relocated Toldbodvejen 48 (currently Esplanade) at the corner of Amaliegade. In 1860, the firm was sold to T. Baagøe, who traded as Blankensteiners Efterfølgers (Blankensteiner's Successors). Various owners followed, including August Busck, William Jensen, Cc. Peterson, and Christian Bønnelycke. The business continued to sell charts until about 2000, when it finally closed. As a side note, the toy side of the business was also quite successful and numbered the playwright and novelist Hans Christian Andersen among its clients.