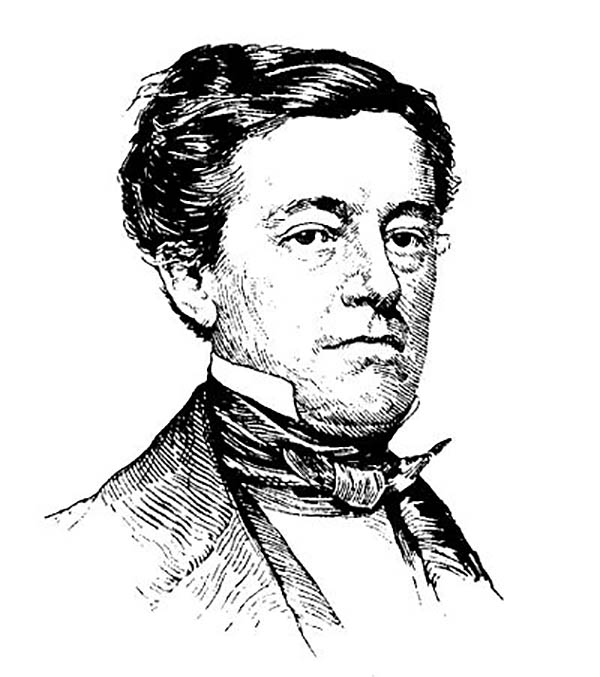 James Melville Gilliss, (September 6, 1811 - February 9, 1865) was an American astronomer and naval officer, and founder of the United States Naval Observatory. He was born in Georgetown, his father a federal employee. In 1827 he joined the navy; upon passing midshipman in 1833 he took leave to began studies at the University of Virginia, but poor health drove him to leave after six months. After completing his studies in Paris, he was recalled to Washington to serve as an assistant at Charles Wilkes' Depot of Charts and Instruments in 1836. The abundance of astronomical devices available at the depot afforded Gilliss the opportunity to practice the astronomical observations necessary to determine the accuracy of the Navy's chronometers, at which he proved to excel. He achieved promotion to the head of the depot in 1838. In 1846 he published Astronomical Observations made at the Naval Observatory, Washington, a listing of 1,248 stars and the first star catalog published in the United States. Gilliss is celebrated for his personal establishment of the U.S. Naval Observatory, the first national observatory in the United States. In 1848 he obtained funding for, and personally headed the 1849-1852 naval astronomical expedition to Chile in order to more precisely measure the solar parallax. The expedition completed the planned astronomical observations as well as valuable observations of the earth's magnetism, earthquakes, geography, Chilean politics and natural science. The specimens brought back from Chile formed the earliest part of the Smithsonian collection from Latin America. Gilliss later led two expeditions to observe eclipses - Peru in 1858, and Washington Territory in 1860. Gilliss was placed in charge of the Naval observatory in 1861 and became a founding member of the National Academy of Sciences.