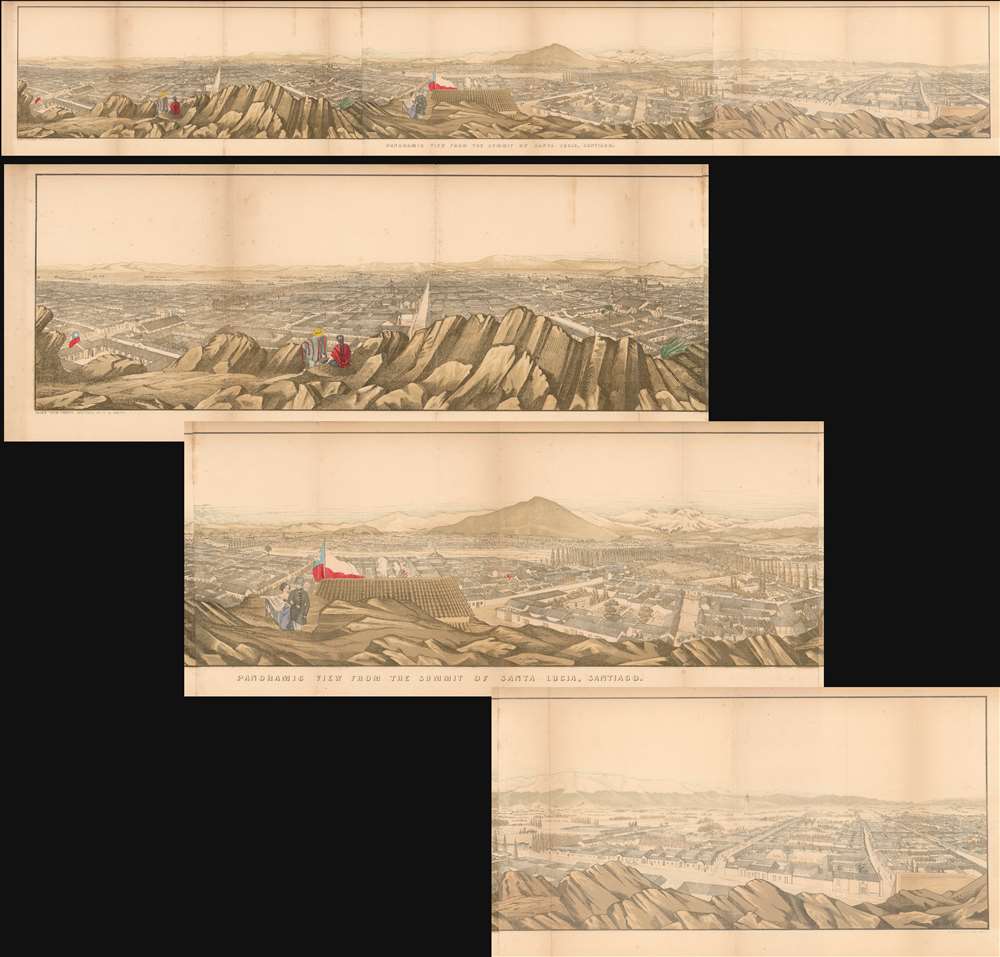 A grand panorama of Santiago, Chile, from the hilltop at the city center.
$400.00

This monumental 1855 lithographed panorama captures the view from the summit of Santa Lucia, or Huelén Hill, at the center of Santiago, Chile. It was executed based on photographs taken on the hilltop by Captain's Clerk E. R. Smith during the United States' Naval Astronomical Expedition of the Southern Hemisphere. The Expedition had made the lion's share of its observations from that summit, and Smith's activities had included time for photography. The sepia-toned view not only displays the prospect of the city but also highlights, in original hand color, a perambulating couple in European dress, and an animated couple in bright, indigenous clothing. Also colored in the foreground are two Chilean flags, while down in the city can be spied an American flag, perhaps marking the location of the buildings occupied by the expedition during their four-year tenure.

This lithograph was printed by Sinclair Lithography of Philadelphia to three sheets and joined, for insertion in the 1855 congressional report on the Astronomical Expedition submitted by its superintendent, Lieutenant J. M. Gilliss. Despite its occasional appearance on the market, the view is neglected in institutional collections, being catalogued only by the Bibliotheque Nationale de France. Gilliss' report, however, is ubiquitous in OCLC.

James Melville Gilliss, (September 6, 1811 - February 9, 1865) was an American astronomer and naval officer, and founder of the United States Naval Observatory. He was born in Georgetown, his father a federal employee. In 1827 he joined the navy; upon passing midshipman in 1833 he took leave to began studies at the University of Virginia, but poor health drove him to leave after six months. After completing his studies in Paris, he was recalled to Washington to serve as an assistant at Charles Wilkes' Depot of Charts and Instruments in 1836. The abundance of astronomical devices available at the depot afforded Gilliss the opportunity to practice the astronomical observations necessary to determine the accuracy of the Navy's chronometers, at which he proved to excel. He achieved promotion to the head of the depot in 1838. In 1846 he published Astronomical Observations made at the Naval Observatory, Washington, a listing of 1,248 stars and the first star catalog published in the United States. Gilliss is celebrated for his personal establishment of the U.S. Naval Observatory, the first national observatory in the United States. In 1848 he obtained funding for, and personally headed the 1849-1852 naval astronomical expedition to Chile in order to more precisely measure the solar parallax. The expedition completed the planned astronomical observations as well as valuable observations of the earth's magnetism, earthquakes, geography, Chilean politics and natural science. The specimens brought back from Chile formed the earliest part of the Smithsonian collection from Latin America. Gilliss later led two expeditions to observe eclipses - Peru in 1858, and Washington Territory in 1860. Gilliss was placed in charge of the Naval observatory in 1861 and became a founding member of the National Academy of Sciences. Learn More...

Good condition. Printed to three sheets and joined as issued. Several marginal mends and splits, not affecting printed image. Some creasing at folds.