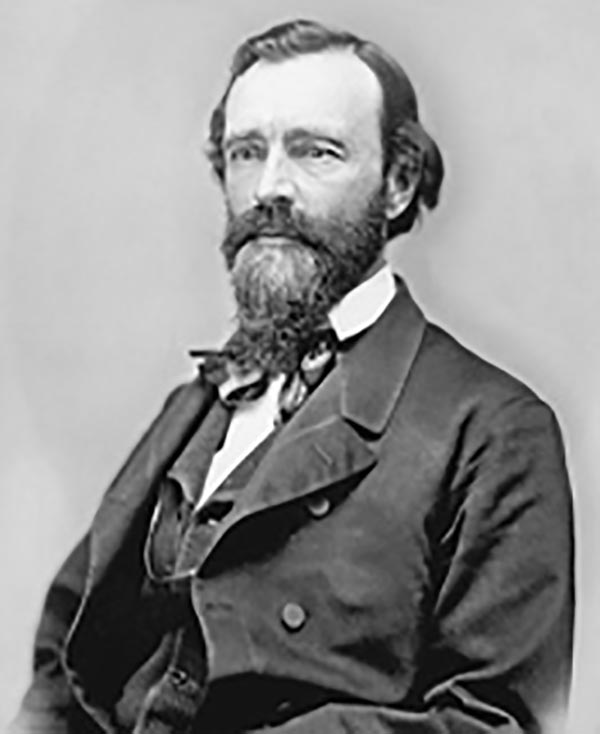 William Gilpin (October 4, 1813 – January 20, 1894) was an American explorer, politician, and land speculator. His ardent belief in Manifest Destiny was wedded to odd climatological theories, which led to the creation of a series of maps in his book Mission of the North American People. He was born near Philadelphia to a wealthy family, was privately educated, and graduated from the University of Pennsylvania in 1833. He attended West Point for a year but did not graduate. He was commissioned as a Second Lieutenant in the U.S. Army and served in the Seminole Wars and resigned two years later, in 1838. After leaving the army, Gilpin moved to St. Louis where he became a newspaper editor and opened a law practice. In 1843 Gilpin accompanied John C. Frémont along the Santa Fe Trail and eventually to the Oregon Country. He settled in the Willamette Valley, helped organize the provisional government, and aided in drafting a petition to the United States Congress requesting support for the provisional government. He was charged with carrying the petition to Congress, and on his way to Washington he helped foment "Oregon fever" and promoted the territory. In 1846, Gilpin again joined the army to fight in the Mexican-American War. This time he was commissioned as a Major and participated in the campaign to capture New Mexico. After the end of the war, he returned to Missouri and resumed his law practice. In the early 1860s, the border war between Kansas and Missouri prompted Gilpin to join the Republican party. He was later rewarded for this move by President Lincoln, because hew as appointed governor of the newly formed Colorado Territory in May 1861. Gilpin's time as governor, however, was short lived. Under threat of Confederate invasion at the beginning of the Civil War, Gilpin created a military regiment without authorization from the federal government. Since he did not have the money to do so, Gilpin issued $375,000 in drafts on the federal treasury. At first, this move was supported by the people of Colorado, but once it became clear that the treasury was not going to validate the drafts, things quickly turned sour for Gilpin. Petitions began to be circulated calling for his removal. Despite the controversy, the creation of the 1st Colorado Volunteers proved to be fortuitous after the Confederates launched an invasion from the New Mexico Territory in the spring of 1862. The Colorado volunteers played a critical role in routing the Texans at the Battle of Glorieta Pass, which became known as the 'Gettysburg of the West'. Even so, Gilpin was removed in April 1862 by President Lincoln. Gilpin died in Denver in 1894 after being run over by a horse and buggy.