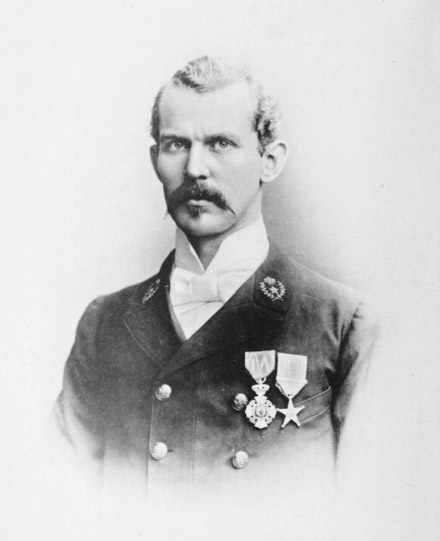 Sidney Langford Hinde, (23 July 1863 - 18 October 1930) was a Canadian-born military medical officer involved in colonial operations in the Congo and East Africa in the 19th century. The son of Surgeon George Langford Hinde (41st Foot Welsh Regiment) and Harrietta Tudor Rayner, daughter of Edward Charles Rayner, Esq. of England. In 1895, Hinde was posted to Machakos Fort in the East African Protectorate Service where he was appointed Resident to the Maasai Chief and Collector of Maasailand. Hinde was credited with aiding the overthrow of the infamous African slave trader Tippu Tip, and his successor, Sefu. A valley on Mount Kenya is named after him, as is a waterfall on te Athi River. He his also memorialized in the scientific name of the Kenyan Mountain Viper, M. hindii. He wrote an article for the May, 1895 issue of The Geographical Journal entitled Three Years’ Travel in the Congo Free State which was accompanied by the present map. In later years, he wrote three books and an article for an ornithological journal.