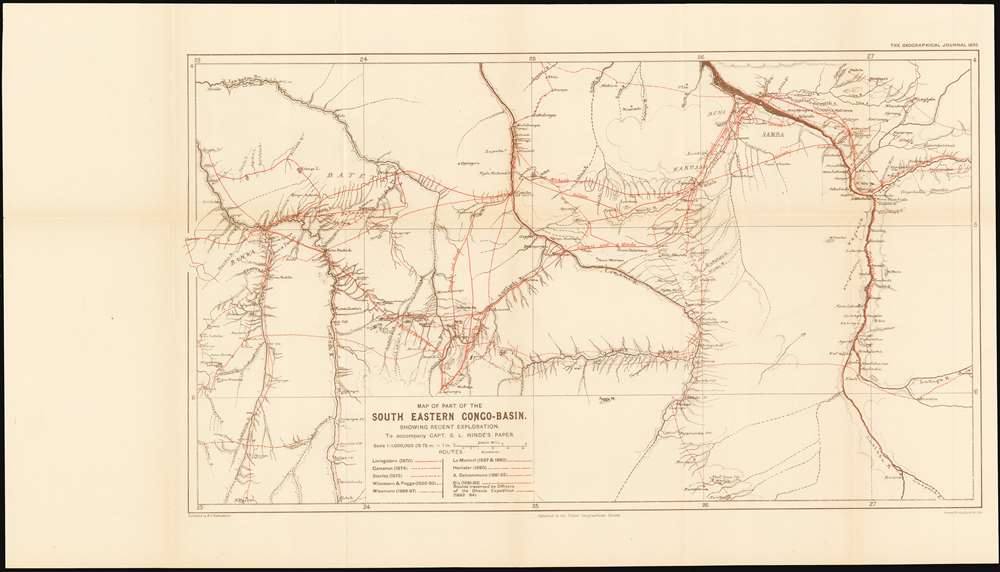 Earliest map to compile the exploration of the Congo River Valley during the Scramble for Africa
$850.00

A rare 1895 Royal Geographic Society map of the southeastern Congo River Basin - the first detailed map to compile over twenty years’ exploration along the courses of the Sankuru, Lomami and Lualaba rivers. This period culminated in the Congo Arab War, a conflict pitting the Belgian proxy government against a coalition of Arab slavers attempting to wrest control of the Congo Free State.

The rivers are drawn in sharp detail, showing myriad tributaries, rapids and sketching in roughly the surrounding topography. Better detail is given for villages, settlements and tribal areas. Of paramount interest are the tracks of ten separate European explorers who, between 1870 and 1894, undertook expeditions along these rivers. These routes are printed in red, differentiated from one another by pattern, and are keyed to a list. These start with the famous Livingstone expedition to find the source of the Congo, and end with the 1892-94 military expedition of Baron Dhanis, under whom served the author of the map and the article associated with it.

This part of the Congo Free State was in the 1890s the scene of the Congo Arab War, largely a proxy war between tribes allied with the Belgian Congo Free State, and those allied with a coalition of Arab Slavers under Tippu Tib and his son, Sefu bin Hamid. The war, which was positioned as an effort to eradicate the Arab slave trade in the region, resulted in the consolidation of Belgian power over the remote quarters of the Congo Free State. The main source of new information to the map, Captain Sidney Langford Hinde, was a medical officer and naturalist serving with the Belgian Force Publique during the war, the events of which he describes in a 1895 article in The Geographical Journal entitled ‘Three Years’ Travel in the Congo Free State.’ (The present map was produced to accompany the article.) The article - and consequently the map - chronicles the Dhanis expedition’s progress through country inhabited by cannibal tribes, villages destroyed by marauding slavers, fording treacherous rapids, and the eventual defeat of the Arab forces at Nyangwe on the shore of the Lualaba River, one of the uppermost tributaries of the Congo. The war appears to have largely hinged on the defection from the Arab to the European camp of the tribal leader and former slaver Ngongo Lutete, whose stronghold of N’Gandu is shown on the map on the Lomami River.

The map was compiled from various current sources by Bernard Vernon Darbishire on behalf of the Royal Geographic Society, including manuscript maps provided by Hinde. The article notes:

With the work of the older explorers, whose routes are laid down on the map, has been incorporated material supplied by captain Hinde, in the shape of sketch-maps made by himself and other officials of the Congo State…

… The courses of the Lukunga and Lualaba from Mbuli’s to Lukuna are from Captain Hinde’s compass-survey, with additions from the survey made by Mr. Mohun (‘Mouvement Geographique,'1894, p. 84). The course of the Lualaba below Lukuna is from Dr. Lenz’s survey.

Thus, the map compiles a broad array of extremely up-to-date reports coming to the attention of the Royal Geographic Society membership, resulting in a sharply detailed map of a region otherwise virtually unknown to Europeans barely more than a decade before, and which to this day remains poorly mapped.

There is no record of this map appearing on the market. OCLC shows only three separate copies of this map in institutional collections.


Sidney Langford Hinde, (23 July 1863 - 18 October 1930) was a Canadian-born military medical officer involved in colonial operations in the Congo and East Africa in the 19th century. The son of Surgeon George Langford Hinde (41st Foot Welsh Regiment) and Harrietta Tudor Rayner, daughter of Edward Charles Rayner, Esq. of England. In 1895, Hinde was posted to Machakos Fort in the East African Protectorate Service where he was appointed Resident to the Maasai Chief and Collector of Maasailand. Hinde was credited with aiding the overthrow of the infamous African slave trader Tippu Tip, and his successor, Sefu. A valley on Mount Kenya is named after him, as is a waterfall on te Athi River. He his also memorialized in the scientific name of the Kenyan Mountain Viper, M. hindii. He wrote an article for the May, 1895 issue of The Geographical Journal entitled Three Years’ Travel in the Congo Free State which was accompanied by the present map. In later years, he wrote three books and an article for an ornithological journal. Learn More...


Bernard Vernon Darbishire (August 8, 1865 Dwygyfylchi, Wales - December 29, 1935, Surrey, England) was a Welsh mapmaker and member of the Royal Geographical Society. He matriculated at Oxford May 23, 1885, and maintained a long relationship with the university and town, producing many educational atlases and maps published by Oxford University Press. Works include The Kingsway Atlas of Physical Geography (1921) Oxford Outline Maps (of the World), (1911) and a series of wall maps printed between 1910 and 1911. He also contributed to Stieler’s Atlas of Modern Geography (editions between 1909 and 1915) and his own War Atlas (1915), a compilation of maps relevant to the first World War. His work with the Royal Geographical Society includes ‘Northern Korea’ (1892), ‘Sketch map of the Black Sea, after I.B. Spindler’ (1892), ‘Sketch map of the Black Sea, after I.B. Spindler’(1894), ’Part of British Guiana and Venezuela’ (1895), ‘Mr. G.G. Dixon's compass-survey of the River Barima : from the Eclipse Falls to the source’ (1895), ‘Map of the Luchu islands, to illustrate Mr. Basil Hall Chamberlain's paper’(1895).hind Learn More...

Fine condition. Folds visible but no wear or loss.