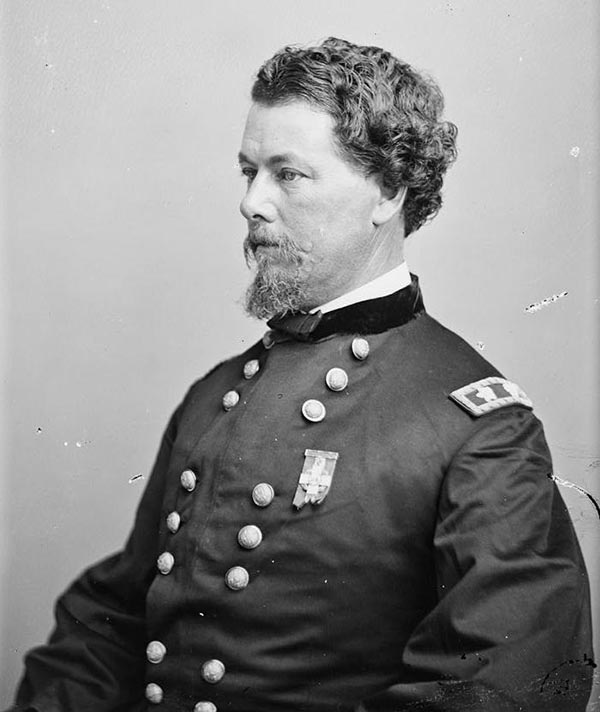 Horatio Gouverneur Wright (March 6, 1820 - July 2, 1889) was an engineer and general in the Union Army during the American Civil War. Born in Clinton, Connecticut, in 1834 at the age of fourteen, Wright began attending Alden Partridge's military academy in Vermont (now Norwich University), and three years later entered the United States Military Academy at West Point. After graduating from West Point in 1841 second in his class with a commission in the engineers, he spent the next several years teaching engineering and French at the Academy. He was transferred to Florida in 1846 and spent the next ten years working on the harbor of St. Augustine and the defenses of Key West.At the beginning of the war, Wright participated in the evacuation and destruction of the Gosport Navy Yard (now known as the Norfolk Navy Yard) to prevent the Confederacy from using the facility. Wright saw action at the First Battle of Bull Run and, due to successful raids against military targets along the coast of Florida in 1862, was appointed major general of volunteers and commander of the Department of the Ohio in August of that year. Unfortunately, his promotion was not confirmed by the Senate so he was removed as commander of the Department in March 1863. By May 1863, Wright was in command of the 1st Division of the VI Corps of the Army of the Potomac, with whom he saw combat at Gettysburg, Mine Run, the Battle of the Wilderness, and Spotsylvania Court House, where he assumed command of the Vi Corps following the death of Major General John Sedgwick. Wright and his troops then fought at Cold Harbor and soon after was dispatched to Washington, D.C. to defend against Confederate General Jubal Early's offensive against the city. After the end of the war, Wright commanded the Army of Texas from July 1865 until August 1866. During his post-war career with the engineers, Wright was involved in the construction of the Brooklyn Bridge and the completion of the Washington Monument. Wright was named Chief of Engineers in June 1879 and retired at the rank of brigadier general on March 6, 1884.