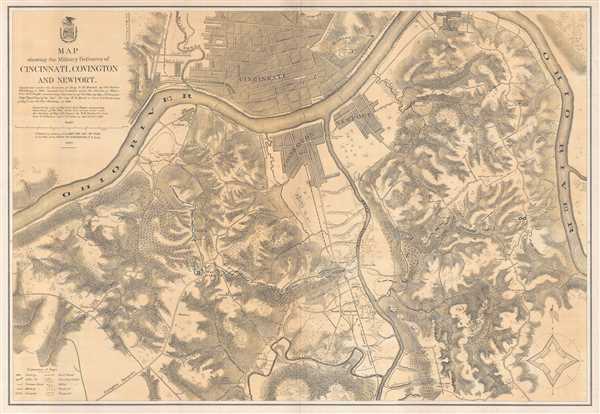 Illustrates the defensive line built around Cincinnati, Covington, and Newport before the Confederate Heartland Offensive of 1862 during the American Civil War.

This is a separate issue 1877 U.S. Army Corps of Engineers map of the defenses of Cincinnati, Ohio, and Covington and Newport, Kentucky, along with the immediate vicinity during the American Civil War. The map depicts the region from the Ohio River west of Covington and Cincinnati to the Ohio River east of the three urban areas where the river runs in a north-south direction, and from Cincinnati to the St. John's Hill Schoolhouse. The defensive line, constructed under the command of Major General Lew Wallace, is illustrated here, stretching from the J.L. Kirby Smith Battery just south of Ludlow near the Ohio River south to Fort Mitchel, and east to Fort Whittlesey, the Peach Orchard, several rifle pits, and a proposed field battery. Batteries are labeled all along the defensive line, with an explanation of the different notations used situated in the lower left corner. The level of detail throughout is astounding, as the difference between standing timber and felled timber is illustrated, particularly along the defensive line, and orchards and vineyards are differentiated by using different notations. Roads throughout the region are illustrated as well, along with individual homesteads bearing the owner's name. Major streets in Cincinnati, Covington, and Newport are also illustrated and labeled, as well as railroads throughout the region.

The 1862 Defense of Cincinnati

From September 1 through 13, 1862, Confederate forces embarked on what has become known as the Confederate Heartland Offensive or the Kentucky Campaign. Confederate Brigadier General Henry Heth was ordered to march his army north along the Lexington Turnpike to Cincinnati, then the sixth-largest city in the United States. Confederate Major General Edmund Kirby Smith sent Heth to Cincinnati to 'make a demonstration' but was told not to attack the city. Upon learning of the advancing army, George Hatch, the mayor of Cincinnati, ordered all businesses closed and Union Major General Lew Wallace declared martial law. In preparation for this threat General Wallace organized a force of 25,000 Union Army soldiers and 60,000 local militia volunteers, known as 'Squirrel Hunters', to construct and defend rifle pits and earthwork fortifications along eight miles of hilltops from Ludlow to present day Fort Thomas, Kentucky. Heth and his army arrived south of Covington on September 6, and immediately began reconnoitering the Union defensive line. Heth quickly ascertained that any attack was pointless. True to his orders, he and his army stayed in the vicinity for a few days, skirmished with Union forces near Fort Mitchel on September 10-11, and returned to Lexington on September 12.

The Importance of Cincinnati during the American Civil War

As stated above, Cincinnati was the sixth-largest city in the United States at the outbreak of the American Civil War. The city, built along the Ohio River, played a major role in the abolitionist movement before the war and became a waypoint on the Underground Railroad for slaves seeking their freedom. During the war, hundreds of Cincinnati citizens volunteered and fought for the Union cause, and the city served as the headquarters of the Department of the Ohio for much of the conflict. From this headquarters, the defense of the region was organized, along with offensives into Kentucky and Tennessee. Cincinnati also provided much needed supplies for the war effort, including boilers, armor plating, and cast-iron cannons, along with gunboats and other Union Navy vessels from the every-growing shipyards built along the Ohio River. Cincinnati was also a major distribution point for the Union armies serving in the Western Theater, dispatching grain, beef, other food, and other military supplies to the soldiers.

This map was compiled by order of Major General H.G. Wright, from surveys conducted under the direction of Major J.H. Simpson and published by the Army Corps of Engineers in 1877. While represented in institutional collections, this map is rarely seen on the market.

Horatio Gouverneur Wright (March 6, 1820 - July 2, 1889) was an engineer and general in the Union Army during the American Civil War. Born in Clinton, Connecticut, in 1834 at the age of fourteen, Wright began attending Alden Partridge's military academy in Vermont (now Norwich University), and three years later entered the United States Military Academy at West Point. After graduating from West Point in 1841 second in his class with a commission in the engineers, he spent the next several years teaching engineering and French at the Academy. He was transferred to Florida in 1846 and spent the next ten years working on the harbor of St. Augustine and the defenses of Key West.At the beginning of the war, Wright participated in the evacuation and destruction of the Gosport Navy Yard (now known as the Norfolk Navy Yard) to prevent the Confederacy from using the facility. Wright saw action at the First Battle of Bull Run and, due to successful raids against military targets along the coast of Florida in 1862, was appointed major general of volunteers and commander of the Department of the Ohio in August of that year. Unfortunately, his promotion was not confirmed by the Senate so he was removed as commander of the Department in March 1863. By May 1863, Wright was in command of the 1st Division of the VI Corps of the Army of the Potomac, with whom he saw combat at Gettysburg, Mine Run, the Battle of the Wilderness, and Spotsylvania Court House, where he assumed command of the Vi Corps following the death of Major General John Sedgwick. Wright and his troops then fought at Cold Harbor and soon after was dispatched to Washington, D.C. to defend against Confederate General Jubal Early's offensive against the city. After the end of the war, Wright commanded the Army of Texas from July 1865 until August 1866. During his post-war career with the engineers, Wright was involved in the construction of the Brooklyn Bridge and the completion of the Washington Monument. Wright was named Chief of Engineers in June 1879 and retired at the rank of brigadier general on March 6, 1884. Learn More...