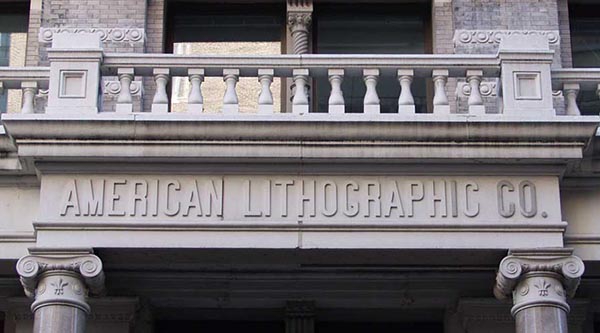 The American Lithographic Company (1892 - 1929) was an American printing concern based in New York City. The firm was formed when Joseph Palmer Knapp (1864 - 1951), son of Joseph Fairchild Knapp (1832 - 1891) of the publishing houses Sarony, Major and Knapp, Major and Knapp, and Knapp and Company. Leveraging his enormous inherited wealth (Jospeh F. Knapp who died in 1891, was the major shareholder in the Metropolitan Insurance Company), Palmer Knapp consolidated multiple smaller presses, including George S. Harris and Sons, Heppenheimer's and Sons, the Donaldson Brothers Company, the Giles Company, Eddy and Calaus, Witsch and Schmitt, and Schumacher and Ettinger, into the first American printing conglomerate. The consolidation was most likely a hedge to control the lucrative cigar label printing industry. Nonetheless, the American Lithographic Company became a major force in American printing, producing a wealth of printed materials until about 1929, when their assents were liquidated.