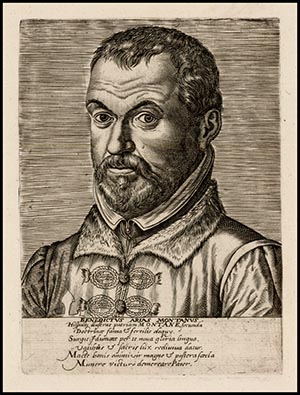 Benedict Arias Montanus (1527 - 1598), also known as Benito Arias Montano, was a Spanish orientalist and polymath active in Spain during the second half of the 16th century. Montanus studied in Seville and Alcala and joined the Benedicting order in 1559. He later became a clerical member of the militant monastic Order of St. James. Arias Montanus is best known for editing the eight-volume Antwerp Polyglot Bible. This work contains several important maps, including a world map that some consider to be the first mapping of Australia (although it was printed well before Australia as officially discovered). Arias Montanus was a friend and correspondent with Abraham Ortelius, who encouraged his interest in cartography. His Polyglot Bible however came under scrutiny of the Spanish and Roman inquisitions for its liberal use of rabbinical texts to elucidate parts of the Bible. He was cleared of charges in 1580 and accepted a post as Royal Chaplain to Philip II of Spain. Afterwards he became the superintendent of the Escorial Library and a master of Oriental languages.

1572 Arias Montanus Map of the World

1572 Arias Montanus Map of the World