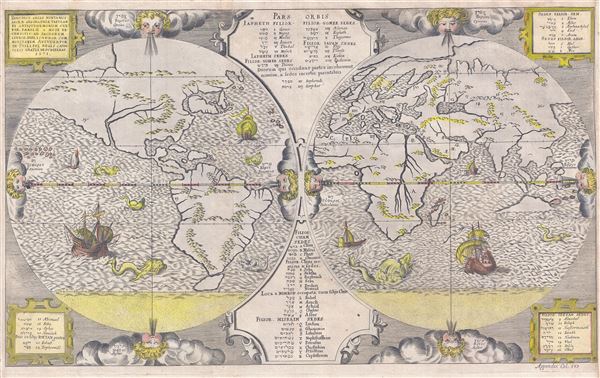 This is a scarce and important 1571 map of the world by Benedict Arias Montanus. Finely engraved and prepared for the eight-volume Antwerp Poyglot Bible, this stunning map is considered to by some to be the first printed map to include Australia - well before its official 1606 discovery by Dutch navigator Willem Janszoon. Arias Montanus' map covers the world in two hemispheres and is designed as a theological reference, particularly with regard to the dissemination of the Sons of Noah and the various Tribes of Israel. Text is thus offered in both Latin and Hebrew. However, this map's most interesting aspects are geographic rather than theological. Three extraordinary and related elements make this map exceptionally interesting.

First, this is possibly the first printed world map to show Tierra del Fuego, at the southern tip of South America, as an island. Both earlier and later maps typically connected Tierra del Fuego to a larger speculative landmass Terra Australis. Terra Australis itself was a supposed massive continent occupying much of the southern hemisphere presumed to exist based upon philosophical notions of balance elucidated by Aristotle. Most maps following Magellan's 1522 circumnavigation of the globe follow the model laid down by Oronce Fine in his spectacular 1531 double-cordiform map of the world. Fine connected Tierra De Fuego to the Great Southern Continent or Terra Australis. This would remain a popular convention until the early 17th century when cartographers finally assimilated the discoveries of Sir Francis Drake. It is unclear why the cartographer may have made such a daring deviation - especially given that, when this map was printed, Drake had yet to circumnavigate the globe or discover the passage around Cape Horn still named Drake Passage. Arias Montanus may have been referencing the questionable discoveries of Spanish Navigator Francisco de Hoces who inferred the passage as early as 1525.

Either way it seems that Arias Montanus, in a departure from the cartographic conventions of his age, was not convinced by Aristotle's argument for a southern landmass counterbalancing Asia. Hence, the next major item of interest is Arias Montanus' abandonment of Terre Australis. Rather than speculating on a Great Southern Continent, Arias Montanus allows even the seas in this map fade into nothingness beyond Tierra del Fuego. This is an odd choice, since, with the exception of the third element to be addressed momentarily, Montanus' map follows established cartographic conventions - note for example the bulge on the west coast of South America. We know that Arias Montanus had a keen interest in cartography and exploration; he was in fact a close friend of Abraham Ortelius, who encouraged his cartographic pursuits. This suggests that Arias Montanus may have had access to significant cartographic resources, some of which he seems to have interpreted far differently than his more famous friend.

And thus, the third element, that for which this map is best known - the unusual depiction of an unnamed landmass tantalizingly reminiscent of Australia to the south of Java. The island is presented differently from every other landmass on the map for it rises out of the waves, almost like a reverse Atlantis. Map historians have often suggested that the Arias Montanus landmass may in fact be a legacy of the Dieppe School Maps which, dating to the 1540s, illustrate a large landmass just south of the Island of Java called Java La Grande or even Land of Java. Typically Java La Grande is connected to some version of Terra Australis and extends to the South Polar regions. Arias Montanus' landmass does resemble Java La Grande somewhat in terms of location if not form.

There are two contrasting opinions regarding what Java Grande of the Dieppe maps may represent. The first is suggests it is an interpretation of Marco Polo's narrative. Marco Polo understood there to be land to the south of Java which he describes as 'an extensive and rich province that forms a part of the mainland.' Arias Montanus would also most likely have been aware of the journals of Ludovico di Varthema published in 1510. Varthema was an Italian traveler who visited Java in June of 1505 and there heard reports of a people far to the south who traveled by the stars. It is an inescapable conclusion that Varthema is recording factual accounts of indigenous Australian navigators. From a more Eurocentric perspective, others believe that Java Grande reflects actual observations of the Australian mainland by Portuguese (or possibly French) navigators on their way to or from the Indies. Navigators in the early 16th century guarded their secrets closely and so it is not unlikely that there would be no recorded mention of either the voyages or their discoveries.

Regardless, we can assume that while Arias Montanus' landmass may not represent the actual discovery of Australia, it does form a sort of proto-Australia presaging the continent's actual discovery. The fact is clear that while Arias Montanus was not confident enough to map the popular Terra Australis, he was confident enough to include a vast body of land to the south of Java. More likely than not, Montanus' proto-Australia is a mapping based upon his own interpretation of the Dieppe maps, the writings of Marco Polo, and Varthmea's journals. His landmass is a new continent not an extension Terra Australis. Indeed, Arias Montanus maps a new land that, based upon evidence from literature and, as far as he knows, actual discovery, he believes is certain to exist. As such, while we cannot definitively say that this is the first printed mapping of Australia, it is with some confidence that we suggest this is the first theoretical presentation of Australia on a printed world map.

One other curiosity on this map that bears study is Arias Montanus' treatment of the New World and its connection to Asia. Arias Montanus draws a massive land bridge uniting the American Pacific Northwest with northeast Asia. Here he is attempting to reconcile New World discoveries with Biblical tradition, placing such sites as Ophir (from when Solomon obtained the gold needed to build the Temple), Iobab (Job), and Sephermos in the New World. Ophir, the most famous of these lands, is given two sites, in Peru and California. It is not clear whether Arias Montanus is suggesting that Ophir is a vast land or that both are possible locations. The land bridge between Asia and America suggests the route taken by the Sons of Noah following the Biblical Deluge. Arias Montanus' New World presentation of Ophir illustrates his educated guess that the Phoenicians, a powerful maritime people of classical antiquity, may have navigated as far as the Pacific Rim of America. How else would Solmon have obtained his gold from the New World?

There are a number of delightful decorative elements positioned throughout including four Portuguese caravels as well as several other ships of uncertain origin. Sea monsters abound, especially in the South Seas. Eight Aeoli figures (wind heads), appear to blow wind from each of the cardinal directions. Most text is presented in both Latin and Hebrew, although the Aeoli figures are also named in Greek.

This map exists in three known states or editions. The first state was published in 1571 and has Orbis Tabula. Ben. Aria Montano. Auctore printed on the verso. Most examples of the first state were destroyed when a ship carrying them to Spain was lost at sea. A second state was printed in 1572. In this example the word gentes is added following the word Iektan in the lower left cartouche. A third state, possibly the rarest corresponds to the present example. The third state, most likely published simultaneously with the second in 1572 features a number of small variations including the resetting of Iektan as Ioktan and an enigmatic re-engraving of the top left Aeolus, named Cyrcius or North Wind, with eyes looking unambiguously to the left. The map historian Rodney Shirley illustrates this state in his Mapping of the World though only notes the variant tangentially. There is another reissue of this map from a completely re-engraved plate published in London around 1660. All in all, the present example represents the rarest edition of an important and intriguing early map of the world.

Benedict Arias Montanus (1527 - 1598), also known as Benito Arias Montano, was a Spanish orientalist and polymath active in Spain during the second half of the 16th century. Montanus studied in Seville and Alcala and joined the Benedicting order in 1559. He later became a clerical member of the militant monastic Order of St. James. Arias Montanus is best known for editing the eight-volume Antwerp Polyglot Bible. This work contains several important maps, including a world map that some consider to be the first mapping of Australia (although it was printed well before Australia as officially discovered). Arias Montanus was a friend and correspondent with Abraham Ortelius, who encouraged his interest in cartography. His Polyglot Bible however came under scrutiny of the Spanish and Roman inquisitions for its liberal use of rabbinical texts to elucidate parts of the Bible. He was cleared of charges in 1580 and accepted a post as Royal Chaplain to Philip II of Spain. Afterwards he became the superintendent of the Escorial Library and a master of Oriental languages. Learn More...

Shirley, Rodney W., The Mapping of the World: Early Printed World Maps 1472-1700, no. 125, plate 107. Surez, T, The Early Mapping of the Pacific, page 79. Australia in Maps: Great Maps in Australia's History from the National Library's Collection, pages 24-25.
Looking for a high-resolution scan of this?