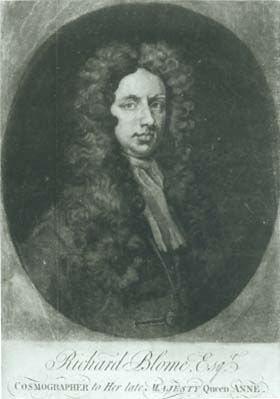 Richard Blome (1635 - 1705) was an important English illustrator, publisher, and cartographer active throughout the late 17th and early 18th century. Blome's father, Richard Bloome (Blome changed the spelling), was a member of the London Stationer's Company, to which Blome was admitted by patrimony. He established himself independently in 1663, producing multiple engravings for various travel narratives and histories. He produced several atlases based on the works of French cartographers, most notably Nicholas Sanson, as well as the re-edited issued of the cartographic works of John Speed, William Camden, and others. Blome was harshly criticized in his lifetime (and later) for not producing original work though it is likely that this stems from the financial difficulties in publishing atlas works without a significant backer. It is not by chance that many cartographers died bankrupt, as engraving, copper plates, and original survey work were expensive propositions. Scholar Ashley Baynton-Williams comments (Map Forum, vol.9)