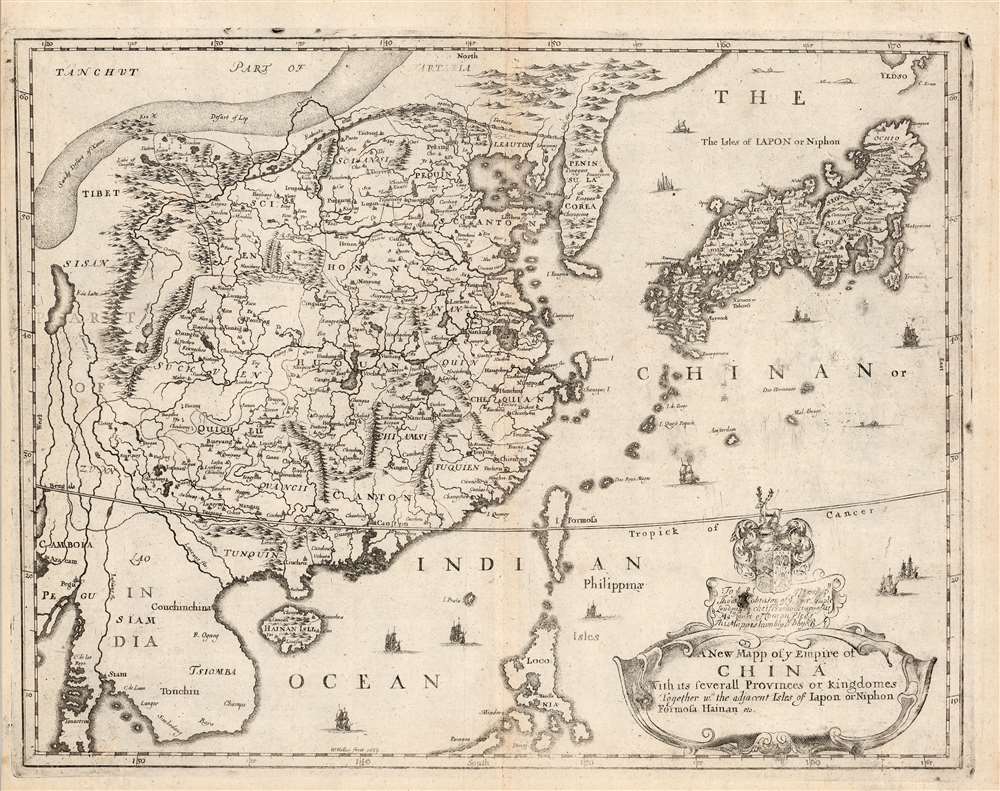 One of the First Maps of China engraved in England.

This is the scarce 1682 Richard Blome map of China, Korea, and Japan. This richly-detailed and surprisingly unique map was engraved in 1669 by the great Bohemian artist and etcher, Wenceslaus Hollar, who for most of his adult life practiced in his adopted England. Although most of the maps appearing in Blome's A Geographical Description of the Four Parts of the World were undisguised renditions of the work of the French geographer Nicolas Sanson, this map is derived from the work of Martino Martini, at least in part, via the atlas of China printed by Joan Blaeu in 1655.

Superficially, the map resembles the 1655 Blaeu Imperii Sinarum Nova Descriptio but this is no slavish copy. First, the area in focus differs: the western limits of this map extend perhaps five degrees less than the Blaeu, ending in the region of Pegu, where the Blaeu continues to Bengal; the southern limit of the Blome is five degrees north, whereas the Blaeu ends just beyond fifteen degrees. As a result, the Blome exchanges Blaeu's western expanses of blank desert for a more complete depiction of the Philippines, and a fuller treatment of the region of Southeast Asia (Siam / Thailand and Cochinchina / Vietnam).

The coastlines of China, the Korean Peninsula, and the southern islands of Japan all hew closely to the Martini model espoused by Blaeu. Blome's interior of Japan is however very different: the 1655 Blaeu appears to unfinished, with only three cities named and a dozen city markers with no names attached. The Blome's Japan is replete with provincial boundaries with dozens of cities named. These appear to be drawn from Martini, probably via the Blaeu Japonia Regnum, although the Japanese topography resembles not that map but the broader Imperii Sinarum Nova Descriptio. Blome diverges from both of these maps in its treatment of the then-uncertain landmass northeast of Japan's main island - Hokkaido . Jeso. On Imperii Sinarum Nova Descriptio, a strait separates Honshu from a distinct island of 'Ieso.' Japonia Regnum shows a broad strait separating Honshu from the southern coast of 'Eso,' of which not here definitively defined as either an island or a peninsula. Blome's 1669 map shows an incomplete coastline dubbed 'Yedso' with a 'C. Eroen' on the Pacific coast. This placename does not appear on either of the Blaeu maps: indeed, we are unaware of a map associating this placename prior to the present example. We do see it on De Wit's 1680 Magnae Tartariae, which in many other respects also adheres to the Martini geography. We are left to speculate after Blome's source for this element.

The mythical Lake of Chiamay, or Chiang Mai (here named Kia lake) appears at the western extreme of the map, roughly in what is today Assam, India. Early cartographers postulated that such a lake must exist to source the four important Southeast Asian river systems: the Irrawaddy, the Dharla, the Chao Phraya, and the Brahmaputra. This lake began to appear in maps of Asia as early as the 16th century and persisted well into the mid-18th century. Its origins are unknown but may originate in a lost 16th century geography prepared by the Portuguese scholar Joao de Barros. It was also heavily discussed in the journals of Sven Hedin, who believed it to be associated with Indian legend that a sacred lake, Mansarovar, linked several of the holy subcontinent river systems. There are even records that the King of Siam led an invasionary force to take control of the lake in the 16th century. Nonetheless, the theory of Lake Chiamay was ultimately disproved and it disappeared from maps entirely by the 1760s.

States of the Blome Map

We are aware of two states of this map; one published in 1669 and a a second appearing in 1682, with which this example is consistent. Like virtually all of Blome's maps, the changes from state to state pertain to the dedicatory cartouche. Blome supported his atlas with subscriptions, rewarding patronage by incorporating subscribers' arms and honor. In the event a subscriber discontinued his patronage, his arms would be burnished from the plate and replaced by those of a paying customer. In this case, the 1669 dedication to Sir Thomas Peyton of Knolton has been usurped by the arms of Thomas Robinson, a London lawyer.

Richard Blome (1635 - 1705) was an important English illustrator, publisher, and cartographer active throughout the late 17th and early 18th century. Blome's father, Richard Bloome (Blome changed the spelling), was a member of the London Stationer's Company, to which Blome was admitted by patrimony. He established himself independently in 1663, producing multiple engravings for various travel narratives and histories. He produced several atlases based on the works of French cartographers, most notably Nicholas Sanson, as well as the re-edited issued of the cartographic works of John Speed, William Camden, and others. Blome was harshly criticized in his lifetime (and later) for not producing original work though it is likely that this stems from the financial difficulties in publishing atlas works without a significant backer. It is not by chance that many cartographers died bankrupt, as engraving, copper plates, and original survey work were expensive propositions. Scholar Ashley Baynton-Williams comments (Map Forum, vol.9)

Wenceslaus Hollar (July 23, 1607 - March 25, 1677) was a Czech / Bohemian artist, etcher and engraver, much of whose life was spent in England. He is known primarily for his engravings and etchings, of which nearly 2800 plates are known. These include a number of excellent maps and city views. He was born in Prague where he initially studied law. The 1620 Sack of Prague during the Thirty Years' War (1618 - 1648) ruined his family's fortunes. Hollar came out of the disruption on the path to becoming an artist. His earliest known works are small engravings, one of which was a copy of a Dürer 'Virgin and Child' and the other is very likely a 1625 outline map of Europe. By 1627 he was in Frankfurt, apprenticed to engraver Matthias Merian (1593 - 1650). Following his apprenticeship, he traveled throughout the Rhineland producing views of towns, castles, and landscapes. His work eventually attracted the notice and patronage of nobleman and art collector Thomas Howard, 21st Earl of Arundel (1585 - 1646). Hollar traveled with Howard from 1636 as a draftsman for the Earl's diplomatic mission to the court of Holy Roman Emperor Ferdinand II (1578 - 1637), as well as to Vienna and Prague. He also accompanied Arundel to England in 1637, where he remained for many years attached to the earl's household. He was not exclusively in the Earl's employ, producing work for many authors and publishers. He produced some very famous views of London following the Great Fire, and was sent in 1668 by the King to Tangier in order to produce views of the towns and forts there. He produced a number of maps for Richard Blome's subscription atlas, the first English atlas actually engraved in England. Unfortunately, his ties with the loyalists during the English Civil War (1642 - 1651) sharply affected his sales, and his patronage declined. He appears not to have been a particularly apt businessman: a friend is recorded as having said of him that he was, 'a very friendly good-natured man as could be, but shiftlesse to the world.' It cannot have helped matters that he only charged a shilling an hour for his labors. Despite the quality of his work, he would die in poverty. Learn More...


Martino Martini (September 20, 1614 - June 6, 1661) was an Italian Jesuit missionary, historian, and cartographer, working mainly on ancient Imperial China. He is acclaimed as the father of Chinese geographical science, as he was ‘the first to study the history and geography of China with rigorous scientific objectivity. Born in Trento, in the Bishopric of Trent, he finished school in 1631. After finishing school, he entered the Society of Jesus and then was sent to study classical letters and philosophy at the Roman College, Rome from 1634 until 1637. He completed his theological studies in Portugal from 1637 until 1639 and was ordained as a priest in Lisbon in 1639. He left for China in 1640 and arrived in Portuguese Macau in 1642. He studied Chinese for some time following his arrival. He then moved to Hangzhou, Zhejiang Province in 1643, and spent much of his time traveling and gathering scientific information, particularly concerning the geography of the Chinese empire. In April 1644, soon after his arrival in China, the Ming capital Beijing fell to Li Zicheng’s rebels and then to the Manchus. Martini had been allied with the short-lived regime of Zhu Yujian, Prince of Tang, who declared himself the (Southern) Ming Longwu Emperor after the fall of the last legitimate Ming emperor, the Chongzhen Emperor. When Wenzhou, where Martini was on a mission for Zhu Yujian, was about to fall to the Manchus, Martini managed to convince them to allow him to change sides. Before the Manchu troops entered the city, Martini created a large red poster stating, ‘Here lives a doctor of the divine Law who has come from the Great West.’ Below the poster he arranged tables with European books, astronomical instruments, and other objects surrounding an altar with an image of Jesus. The commander of the Manchu troops was so impressed by the display that he politely asked Martini to change sides. In 1651, Martini left China as the Delegate of the Chinese Mission Superior. After a circuitous journey, he reached Rome in the spring of 1655. He carried with him a long and detailed communication from the Jesuit missionaries in China, defending the so-called Chinese Rights(veneration of ancestors and other practices allowed to new Christians). After five months of discussions and debates, the Propaganda Fide issued a degree in favor of the Jesuits, although the controversy did not abate. Learn More...