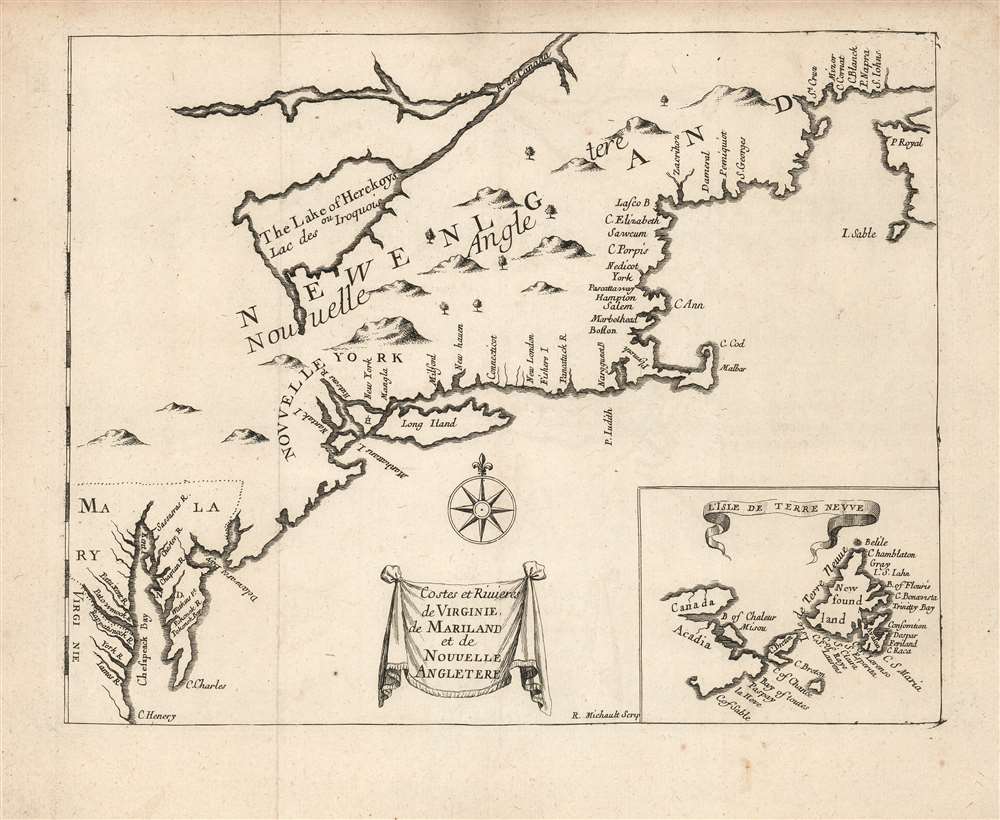 First Acquirable Map of the British Colonies from Virginia to New England.

This is the 1674 Justel edition of Richard Blome's map of Virginia, Maryland, and New England. Blome's rare 1672 A Draught of the Sea Coast and Rivers of Virginia, Maryland and New England Taken from the latest Surveys was the first English map to focus on the British colonies in North America from Virginia up through New England, just preceding the explosion of geographical knowledge represented by the works of Herrman (1673) and Seller (1676.) This French edition of the map is also scarce, but more acquirable to the collector than the Blome. It is a valuable addition to any collection pertaining to colonial Virginia and New England, in that it shows the starting point for the expansion of those colonies that followed in the late seventeenth century.

The present Justel map faithfully preserves the geographical features of the Blome map, whilst improving the legibility. For example, the place names on the New England coast north of Cape Cod are oriented to be read with north at the top, whereas on the Blome they are 'upside down,' oriented to be read as though following the coast from northeast-to-southwest. While the Justel lacks the dedicatory cartouche of the Blome, Michault's engraving is nevertheless superior, both in terms of legibility and the pleasing quality of the image.

Chesapeake Bay displays many of the place names found on the 1671 Ogilby map of Virginia, and the Virginia-Maryland geography may be derived loosely from that map. The massive lake attached to the Saint Lawrence River, 'The Lake of Herekoys,' is not a Great Lake but a monumentally distorted Lake Champlain. Its form here suggests that at least some of the New England data was derived from the unacquirable 1664 Joseph Moxon map of the British Colonies, although the coastlines do not resemble that map. The depiction of Nova Scotia, Newfoundland, and the Maritimes is puzzling. Cape Sable on Nova Scotia is shown as an island and misidentified as 'Isle Sable' whilst the island normally bearing that appellation is here unnamed in the inset map of Newfoundland.

Henri Justel (1620 - 1693) was a French scholar, royal administrator, bibliophile and librarian. The son of the scholar Christophe Justel, he was a well-connected correspondent, exchanging letters with the likes of Locke, Boyle, Halley and Oldenburg of the Royal Society, and also Leibniz and Arnauld. He achieved position as secretary of Louis XIV. Nevertheless, he had to leave France for refuge in England in 1681 in anticipation of the revocation of the Edict of Nantes (he was Huguenot.) In England he became a royal librarian at St. James's Palace, serving under William III. Among his works was a collection of travels (Recueil De Divers Voyages Faits En Afrique Et En L'Amerique) inspired by his friendship with traveller Melchisédech Thévenot. Learn More...


Richard Blome (1635 - 1705) was an important English illustrator, publisher, and cartographer active throughout the late 17th and early 18th century. Blome's father, Richard Bloome (Blome changed the spelling), was a member of the London Stationer's Company, to which Blome was admitted by patrimony. He established himself independently in 1663, producing multiple engravings for various travel narratives and histories. He produced several atlases based on the works of French cartographers, most notably Nicholas Sanson, as well as the re-edited issued of the cartographic works of John Speed, William Camden, and others. Blome was harshly criticized in his lifetime (and later) for not producing original work though it is likely that this stems from the financial difficulties in publishing atlas works without a significant backer. It is not by chance that many cartographers died bankrupt, as engraving, copper plates, and original survey work were expensive propositions. Scholar Ashley Baynton-Williams comments (Map Forum, vol.9)

René Michault (fl. 1668 - c. 1685) was a French copperplate engraver and calligrapher active in Paris in the second part of the 17th century. He is considered one of the best pupils of the great calligraphic master Nicolas Jarré. His work appears on the maps of Sanson, De Fer, Du Val, and Justel. Learn More...