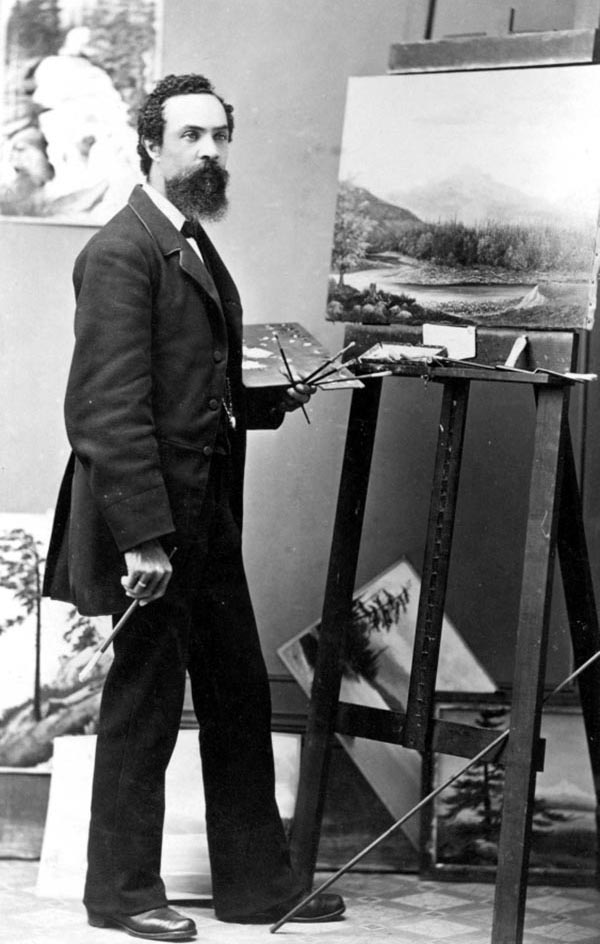 Grafton Tyler Brown (February 1841 – March 2, 1918) was an American painter, lithographer, viewmaker, and cartographer active in California and the Pacific northwest. Brown was one of the few African American lithographers and viewmakers active in the 19th century. He was born in Harrisburg, Pennsylvania and was the son of free blacks involved with the abolitionist movement. He studied printing in Philadelphia from 14 years of age, mastering lithography by the time he reached his maturity. Brown relocated to San Francisco in 1858, when he was just seventeen, and just prior to the outbreak of the American Civil War (1861 - 1865). He initially took work as a steward at the St. George Hotel in Sacramento, but quickly earned a reputation as an excellent artist. Meanwhile in 1850 San Francisco, the viewmakers, Charles C. Kuchel (1820 - 1865) and his artist Emil Dresel, operating as 'Kuchel and Diesel', split ways. Dresel, the artist, moved to Sonoma to open a vineyard. Kuchel needed a new artist and had heard of Grafton Brown through his connections. Grafton accepted the position and moved to San Francisco, where he worked with Kuchel from 1861 to 1865. When Kuchel died in 1865, Grafton purchased the business. Curiously, while he appears in Sacramento directories as 'colored', in San Francisco there is no such designation, later, in Minnesota census records, he is recorded as 'white'. In fact, being very light skinned, he could pass as either race depending on the viewer's expectations. Literature of the period suggests that his true ethnicity was an open secret that most chose to willfully ignore in the face Brown's competence and business acumen. Brown was a lithographer, while most of his San Francisco competitors were letterpress printers. The versatility of lithography gave him a natural advantage in terms of both price and versatility over letterpress. Among his earliest work are advertisements for such prominent firms as Levi Strauss. By 1870 he had a staff of 4, expanding to 8 in 1880. Some of his best customers were mining companies, who issued decorative stock certificates printed by Brown. Through these, he became involved with producing bird's-eye views to promote mining boomtowns. He issued the first and second views of Virginia City, as well as the first and only view of Silver City, Idaho Territory. He also issued a wealth of real-estate maps, primarily focused on Oakland, California. By the 1880s, the silver loads and Oakland real estate business began to decline and, along with it, Brown's business. In 1882, he sold his company and relocated to Victoria, British Columbia, Canada, to work with Amos Bowman in the national Geological Survey. He worked with the survey as a draftsman and landscape artist. Leveraging his history of view making, many of Brown's landscapes were based upon photographs he took. In 1884 he returned to the United States and settled in Portland, Oregon, where he worked as a landscape painter. Brown moved again in 1893, this time to Saint Paul, Minnesota, where he once again worked as a draughtsman, this time for the United States Army Corps of Engineers, as well as for the city of St. Paul. In the 1890s, he worked extensively in Yellowstone, producing photographs, paintings, and views. Brown remained in Minnesota until his death in 1918.