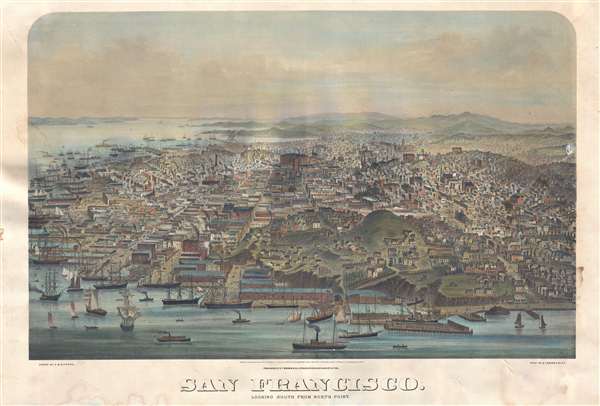 A view of San Francisco, California originally published in 1877 by G. T. Brown and company. The present example is a 20th century reproduction issued by John Howell Books, a now defunct California bookstore active from 1912 - 1985. The view bears signs of age and probably dates to about 1960. The original of this view is now, for all intent and purposes, unobtainable and even Howell's reproduction is quite rare.

The original view was published by Grafton Tyler Brown, one of the few African American viewmakers, based upon a painting by C. B. Gifford. It reveals San Francisco looking South from North Point (today San Francisco's Financial District). The San Francisco Bay appears to the left and the busy harbor occupies the foreground.

This view was originally published in 1877 based upon a painting by Charles B. Gifford. The view is one of the earliest published independently by Grafton Tyler Brown, predating the founding of his San Francisco by one year. The present example, as stated, is a mid-20th century reproduction by the now defunct San Francisco bookstore, John Howell Books. Howell's reproduction is on thick stock and of the highest quality, virtually indistinguishable from the original on all levels, and has, today, become quite rare in its own right.

Grafton Tyler Brown (1841 – 1918) was an American painter, lithographer, viewmaker, and cartographer active in California and the Pacific northwest. Brown was one of the few African American viewmakers active in the 19th century. He was born in Harrisburg, Pennsylvania and was the son of a freedman who was involved with the abolitionist movement. He studied printing in Philadelphia from 14 years of age, mastering lithography by the time he reached his maturity. Brown relocated to San Francisco just prior to the outbreak of the American Civil War. He worked for the San Francisco printers Kuchel and Dressel from 1861 to 1867 and opened his own firm as early as 1875. In 1882, he sold his company and relocated to Victoria, British Columbia, Canada, to work with Amos Bowman in the national Geological Survey. He worked with the survey as a draftsman and artist. In 1884 he returned to the United States and settled in Portland, Oregon, where he worked as painter of landscapes. Brown moved again in 1893, this time to Saint Paul, Minnesota, where he once again worked as a draughtsman, this time for he United States Army Corps of Engineers, as well as for the city of St. Paul. Brown remained in Minnesota until his death in 1918. Learn More...


Charles Braddock Gifford (1829 - November 17, 1888) was an American draughtsman, landscape artist, lithographer, and painter of city views based in and around San Francisco in the late 19th century. Gifford was born in New Bedford, Massachusetts. He worked in Massachusetts as a carpenter until about 1855, around which time he headed west to seek his fortune. By 1860, Gifford was established as a lithographer and landscape artist in San Francisco. His wife, Josephina, was from Nicaragua. His earliest views include the Mission Dolores, Vallejo and Santa Clara. Most of his earliest work was published by Louis Nagel, but later work was taken over by Bancroft. He began producing views in 1860 and continued to issue new views with various publishers until about 1877. He is best known for his highly ambitious 1862 view of the city on five large panels measuring some 9 feet across published with A. Rosenfeld. He issued approximately 15 views in total, most of which were of San Francisco area cities, but he also traveled to Washington state and issued several views there. Gifford died in San Mateo in 1888. Learn More...

Reps, John, Views and Viewmakrs of Urban America (University of Missour, Columbia, 1984), #330.
Looking for a high-resolution scan of this?