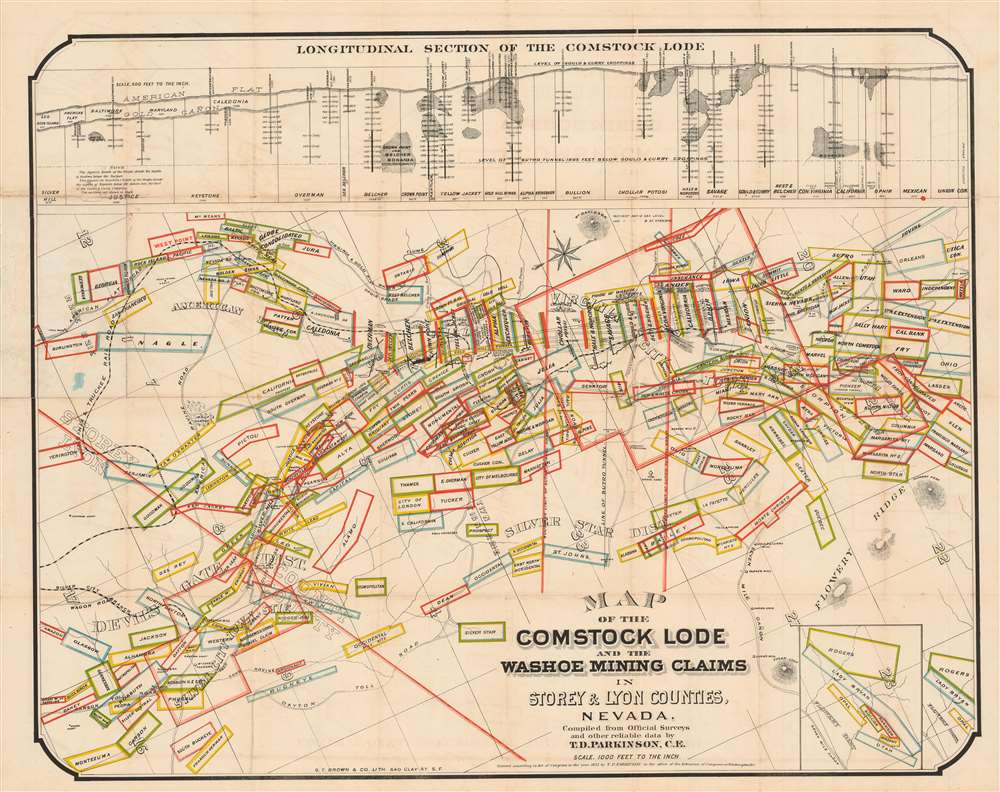 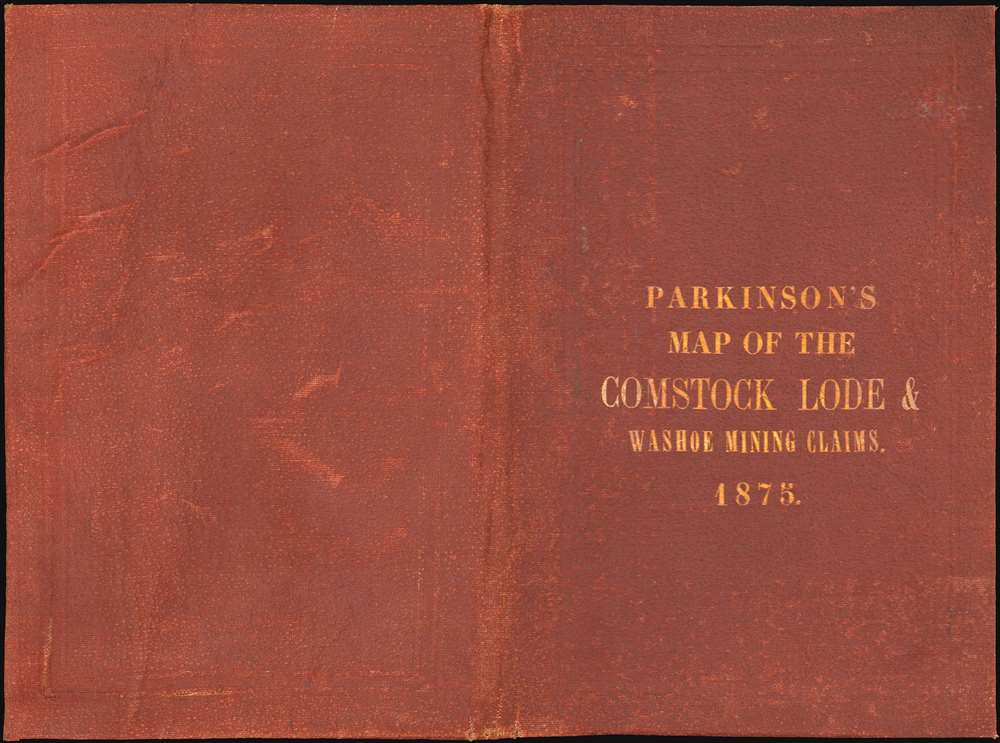 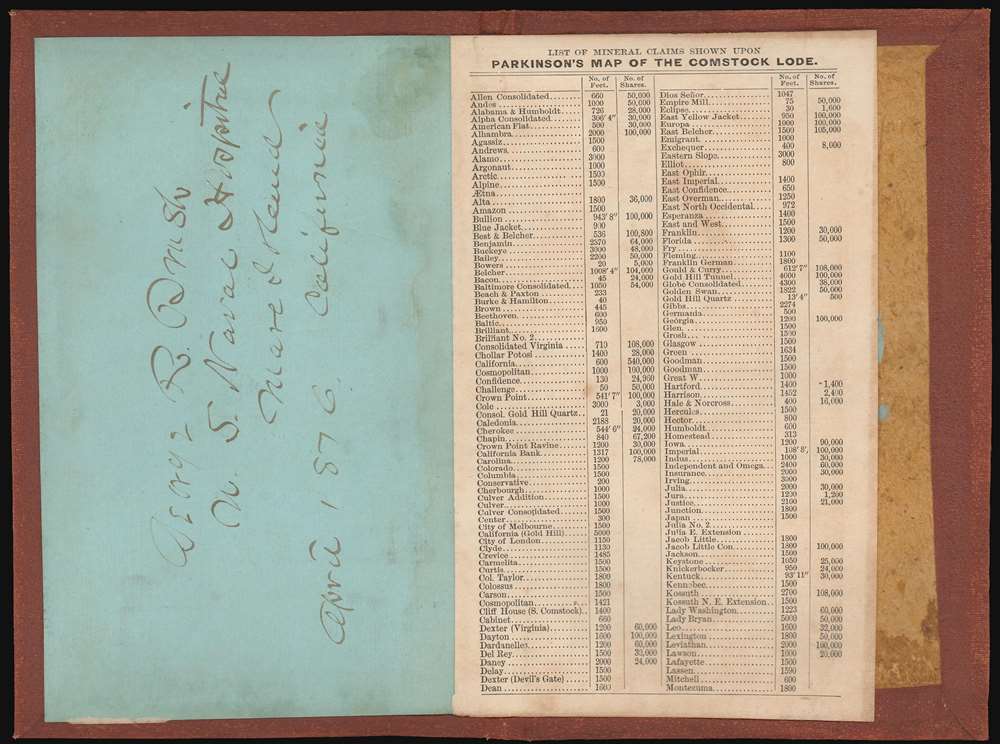 Mining claims of the Comstock Lode.

This is an 1875 T.D. Parkinson and Grafton Tyler Brown map of the Comstock Lode in Nevada. Boxes outlined in several different colors highlight individual mining claims from Silver City north to the North Virginia Townsite and Flowery Ridge. The Virginia and Truckee Railroad winds its way toward Virginia City and the Silver City Branch connects that railroad with Silver City. Streets are illustrated in Virginia City, although none are named. Numerous mills, mine shafts, toll houses, and other sites are identified, including the graveyard and county hospital. The Sutro Tunnel is prominently labeled to the right of center. A longitudinal view of the Comstock Lode appears above the map and illustrates where the silver strikes were located, the depth of many of the mine shafts, and the depth of the Sutro Tunnel.

The Comstock Lode was a massive silver ore discovery under the eastern slope of Mount Davidson, in the Virginia Range in Nevada. Named after the miner, Henry Comstock, the Comstock Lode was the first major silver mine in the United States. Mount Davidson had deposits of both gold and silver, and was mined for gold from about 1850. History credits Ethan and Hosea Grosh with the discovery of the mountain's extraordinary silver deposits - the Comstock Lode - in 1857. Although they discovered the Comstock Lode, neither Grosh brother profited from the claim. The uneducated miner Henry Comstock was charged with taking care of the Grosh cabin. Rooting around inside, he found a chest full of silver and gold ore. Comstock claimed the cabin and surrounding lands under his own name and proceeded to mine. The find became public knowledge in 1859, after which fortune seekers flooded the area, staking mineral claims and founding mining camps that would later become towns. Several bonanzas ensued, creating a cadre of instant millionaires. Most Comstock Lode mines began to decline after 1874, but prospectors still worked claims through the 1920s. Between 1860 and 1880, nearly seven million tons of ore were extracted and milled in the Comstock district. During 1877, its peak year, over $14 million in gold and $21 million in silver were extracted. The Comstock Lode mines also led several technological advances, including square site timbering and the Washoe silver smelting process.

As mine shafts sunk further into the ground, miners began to encounter a new problem: lots and lots of water. Historically, mines pumped water to the surface, but the volume of water at the Comstock Mines was unprecedented. Adolph Sutro offered another solution. First proposed by Sutro in 1860, the Sutro Tunnel is a drainage tunnel connected to the Comstock Lode mines that would drain the water without the need for expensive pumps. At first, the idea gained widespread approval, but soon mining companies began to turn against it, suspecting that Sutro would use the project to claim mineral rights. It took five years for Sutro's idea to acquire legislative go-ahead. After finally receiving approval, Sutro formed the Sutro Tunnel Company and sold stock certificates to raise the funds. He also raised money among the miners, suggesting that the tunnel would make mining easier and safer. Construction began in 1869 and broke through into the Savage Mine on September 1, 1878, nine years later. The project's final cost was about $2 million. Unfortunately, by the time the Sutro Tunnel was completed, the Comstock Lode mines had already entered their decline. Nonetheless, to this day, the effective tunnel keeps the upper sections of the Comstock Lode mines dry. As for Sutro, soon after construction ended, he sold his stake in the company and moved to San Francisco, where he built the Sutro Baths and a smaller 'Sutro Tunnel'. He also became a successful real estate investor and later mayor.

Thomas D. Parkinson (April, 1835 - May 11, 1906) was an American civil engineer and businessman. Parkinson was born in Massachusetts. He worked as a civil engineer in San Francisco and Oakland in the 1860s and 1870s. He first appears in San Francisco directories as a Civil Engineer in 1865 and remains in subsequent directories until 1867. In 1871 he appears in Virginia City, Nevada. He is back in California in 1877, where he is named as a Civil Engineer in the Oakland Directory. In 1880, Parkinson was appointed Humboldt County Surveyor in Humboldt County, California. He became the manager of the Nevada Land and Cattle Company in 1888 and resigned in 1890 due to accusations of mismanagement and returned to the Bay Area. Several lawsuits, instigated by the investors in the Company and by Parkinson himself, dragged on through the U.S. court system for thirteen years, with one case being decided against Parkinson in 1903. In 1900 he is named in the Oakland Directory as a 'landholder.' He died in San Mateo in 1906. Learn More...


Grafton Tyler Brown (1841 – 1918) was an American painter, lithographer, viewmaker, and cartographer active in California and the Pacific northwest. Brown was one of the few African American viewmakers active in the 19th century. He was born in Harrisburg, Pennsylvania and was the son of a freedman who was involved with the abolitionist movement. He studied printing in Philadelphia from 14 years of age, mastering lithography by the time he reached his maturity. Brown relocated to San Francisco just prior to the outbreak of the American Civil War. He worked for the San Francisco printers Kuchel and Dressel from 1861 to 1867 and opened his own firm as early as 1875. In 1882, he sold his company and relocated to Victoria, British Columbia, Canada, to work with Amos Bowman in the national Geological Survey. He worked with the survey as a draftsman and artist. In 1884 he returned to the United States and settled in Portland, Oregon, where he worked as painter of landscapes. Brown moved again in 1893, this time to Saint Paul, Minnesota, where he once again worked as a draughtsman, this time for he United States Army Corps of Engineers, as well as for the city of St. Paul. Brown remained in Minnesota until his death in 1918. Learn More...