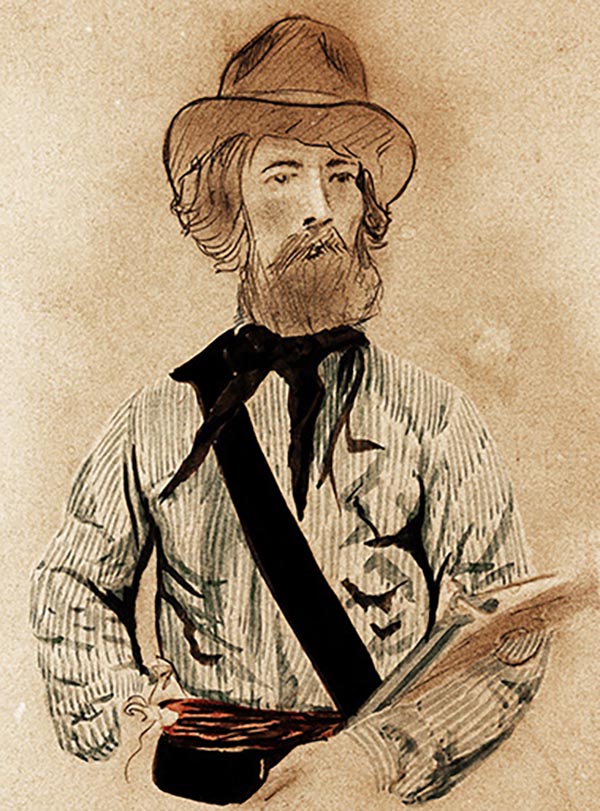 Joseph Goldsborough Bruff (October 2, 1804 - April 14, 1889) was an American artist, adventurer, surveyor, and cartographer active in the mid to late 19th century. Bruff was born in Washington D.C., the son of a wealthy physician, dentist, and inventor (coffee grinder). At 16 he was sent to West Point, but shortly afterwards dismissed for dueling. He subsequently signed on a merchant ship as cabin boy, initiating a five-year career as an itinerant seaman. In 1927 he returned to Washington, taking a position as a draughtsman at the Norfolk Naval Shipyard. Shortly thereafter he transitioned to a higher paid position at Fort Monroe, where he remained for 2 years. Gruff had an arrogant entitled character, but his work was exacting and much admired, enough so that in 1839, he was hired as a draftsman for the Army Bureau of Topographical Engineers. There he compiled and published numerous maps from hand-drawn field maps prepared by explorers. His work from this period includes drafting the important exploration maps of John C. Frémont (who became a personal friend), and the first map of Florida after statehood. In 1849, Bruff, like many Americans caught gold fever. He leveraged his connections in Washington to finance the Washington City and California Mining Association. The well-funded expedition traveled overland in a caravan of sixty-six men and 14 wagons. While Bruff did not discover gold in California, he did travel extensively throughout he gold region producing numerous important maps and diagrams. He returned to Washington via ship, landing in New York in July of 1851. Back in Washington he took work with the Treasury department in the Office of the Supervising Architect. He helped in the design and construction of the DC Treasury Building as well as Treasury offices around the country. Bruff continued his position with the treasury until his death in 1889, at which time he was the oldest active U.S. Government employee. Bruff is interred at the National Congressional Cemetery in Washington. D.C.