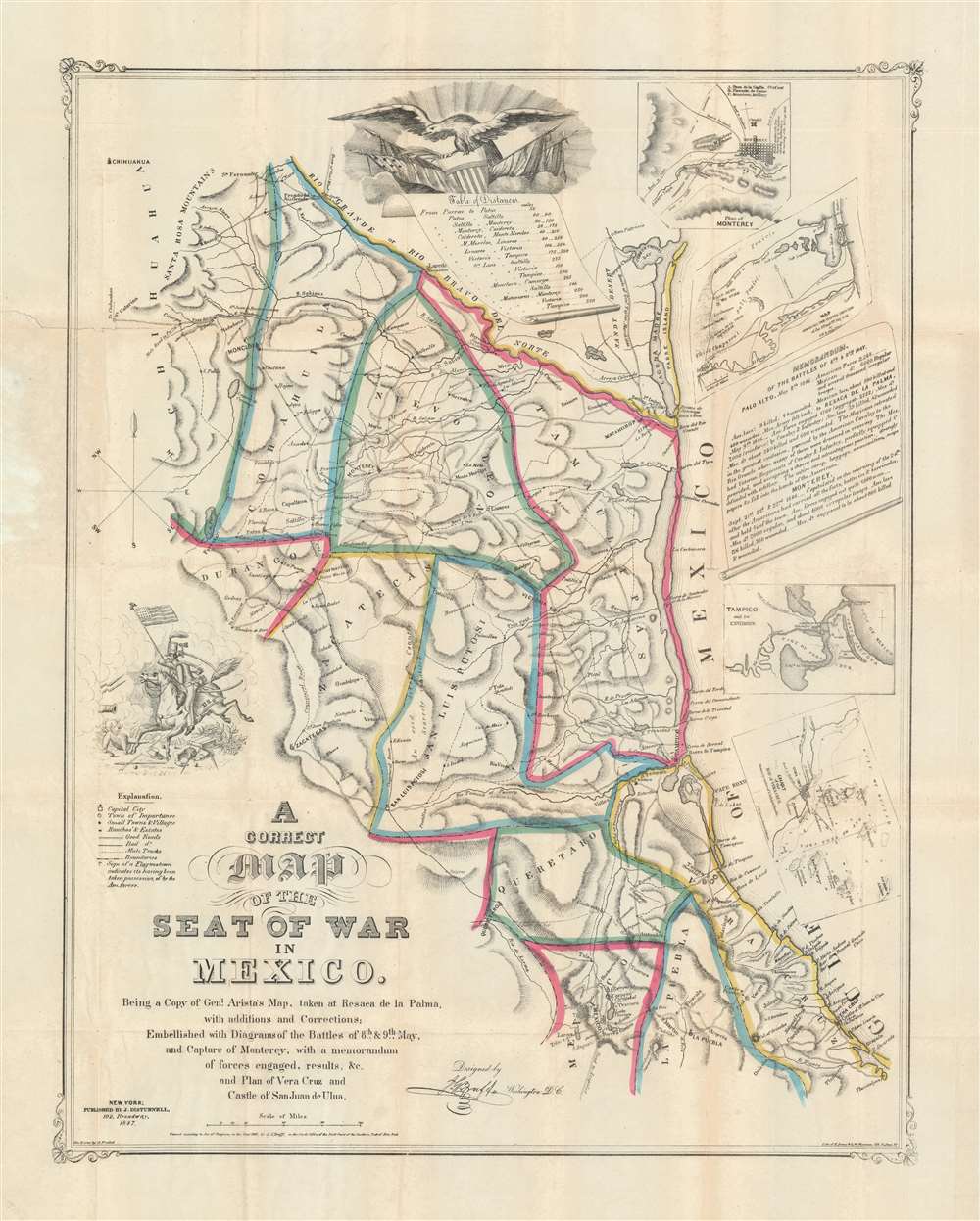 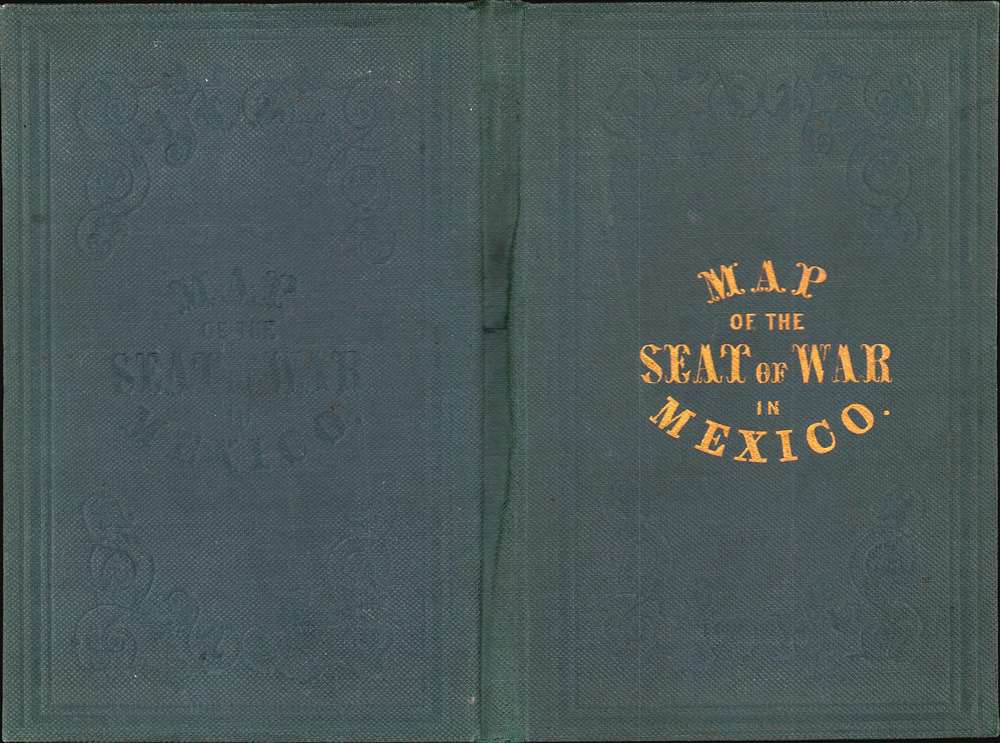 Created from a captured Mexican map.

This is a rare first-edition 1847 John Disturnell and Joseph Goldsborough Bruff map of the Mexico during the Mexican-American War (1846 - 1848). Depicting the region from Chihuahua to the Gulf of Mexico and from the Rio Grande to Mexico City, this map represents the most detailed cartography available to the United States Army at the beginning of the war.

The source material for the present map was discovered in Mexican General Arista's baggage by General Zachary Taylor's army following the Battle of Resaca de la Palma (May 9, 1846). Members of General Taylor's staff (including George Meade, commander of the Union Army of the Potomac at Gettysburg) made copies of the captured map and sent them to Washington. Despite being top-secret intelligence, the map was leaked by Bruff to both New York Herald and map publisher John Disturnell, who published the present map.

Arista's map provides the general source topography, which either Bruff or Disturnell augmented with additional information and insets. Cities captures by the U.S. Army are marked with flags, most of which are concentrated along the Rio Grande and further south, highlighting American victories during the first few months of the war. This edition notably predates General Scott's march across central Mexico.

The Battles of Palo Alto and Resaca de la Palma

When Bruff and Disturnell refer to the battles of May 8th and 9th, 1846, they are referencing the Battle of Palo Alto (May 8) and the Battle of Resaca de la Palma (May 9). Considered the first major battle of the Mexican-American War, the Battle of Palo Alto pitted U.S. General Zachary Taylor against Mexican General Mariano Arista. It occurred three days before the official declaration of war. Arista's forces crossed the Rio Grande on April 30 and, beginning on May 3, besieged Fort Texas. Taylor and his Army of Occupation marched to relieve the siege, and Arista diverted the majority of his forces to meet the advance. Arista's two cavalry charges were devastatingly bombarded by U.S. artillery, leading to defeat for the Mexicans. The Battle of Resaca de la Palma took place a day later. General Taylor and his army engaged Arista's retreating army, driving the Mexican army out of Texas.

The Battle of Monterrey

The Mexican-American War was fought between Mexico and the United States over Texas from 1846 to 1848. The Republic of Texas was a short-lived nation established in March of 1836 when it ceded from Mexico. Following the independence of Mexico from Spain, the American Stephen Fuller Austin led a group of 300 Empresarios to settle Texas, near Austin, where they received a grant from the Mexican government. As more Americans moved to Texas, resentment and strife began to build between the American settlers and Mexican authorities. This and other factors ultimately led to the Texan Revolution in 1835 and the declaration of Texan independence in 1836. Texas remained an independent republic until it joined the United States 10 years later in 1846. The annexation incited Mexican authorities, who considered Texas their sovereign territory. Mexico marched against Texas and, in the aftermath, the U.S. landed forces at Veracruz and marched on Mexico City. The army, after a series of one-sided battles, captured Mexico City, forcing the Mexican government to sue for peace. In the subsequent Treaty of Guadeloupe Hidalgo, United States gained most of the southwestern United States, including Texas, Arizona, New Mexico, California, Utah, and Nevada. In exchange, the U.S. paid Mexico $15 million and assumed $3.5 million in debt the U.S. claimed the Mexican government owed to American citizens.

This map was adapted from a Mexican map captured by Joseph Goldsborough Bruff. It was engraved by John Probst, lithographed by E. Jones and G.W. Newman, and published by John Disturnell in 1847. Scarce on the market.


Joseph Goldsborough Bruff (October 2, 1804 - April 14, 1889) was an American artist, adventurer, surveyor, and cartographer active in the mid to late 19th century. Bruff was born in Washington D.C., the son of a wealthy physician, dentist, and inventor (coffee grinder). At 16 he was sent to West Point, but shortly afterwards dismissed for dueling. He subsequently signed on a merchant ship as cabin boy, initiating a five-year career as an itinerant seaman. In 1927 he returned to Washington, taking a position as a draughtsman at the Norfolk Naval Shipyard. Shortly thereafter he transitioned to a higher paid position at Fort Monroe, where he remained for 2 years. Gruff had an arrogant entitled character, but his work was exacting and much admired, enough so that in 1839, he was hired as a draftsman for the Army Bureau of Topographical Engineers. There he compiled and published numerous maps from hand-drawn field maps prepared by explorers. His work from this period includes drafting the important exploration maps of John C. Frémont (who became a personal friend), and the first map of Florida after statehood. In 1849, Bruff, like many Americans caught gold fever. He leveraged his connections in Washington to finance the Washington City and California Mining Association. The well-funded expedition traveled overland in a caravan of sixty-six men and 14 wagons. While Bruff did not discover gold in California, he did travel extensively throughout he gold region producing numerous important maps and diagrams. He returned to Washington via ship, landing in New York in July of 1851. Back in Washington he took work with the Treasury department in the Office of the Supervising Architect. He helped in the design and construction of the DC Treasury Building as well as Treasury offices around the country. Bruff continued his position with the treasury until his death in 1889, at which time he was the oldest active U.S. Government employee. Bruff is interred at the National Congressional Cemetery in Washington. D.C. Learn More...


John Probst (March 11, 1805 - March 11, 1896) was a German-American lithographer active in the middle part of the 19th century. Probst was born in Bremen, Germany, in 1805 and emigrated to the United States in 1831. He ran a prosperous commercial lithography studio from at least 1847 through the 1879s. Probst died on this birthday in his home at 268 Berry, Street, Williamsburg, Brooklyn, aged 91. Learn More...


Edward Jones (fl. c. 1844 - 1850) was an American lithographer based in New York in the middle of the 19th century. Jones worked both independently and in various partnerships. He partnered with Edward S. Palmer in 1844, publishing as 'Jones and Palmer' and later from 1847to 1849, with George W. Newman, publishing as 'Jones and Newman'. He was still active independently as late as 1850. Jones and Newman were both lithographers and chromolithographers, winning a several medal for their work in 1849. Learn More...