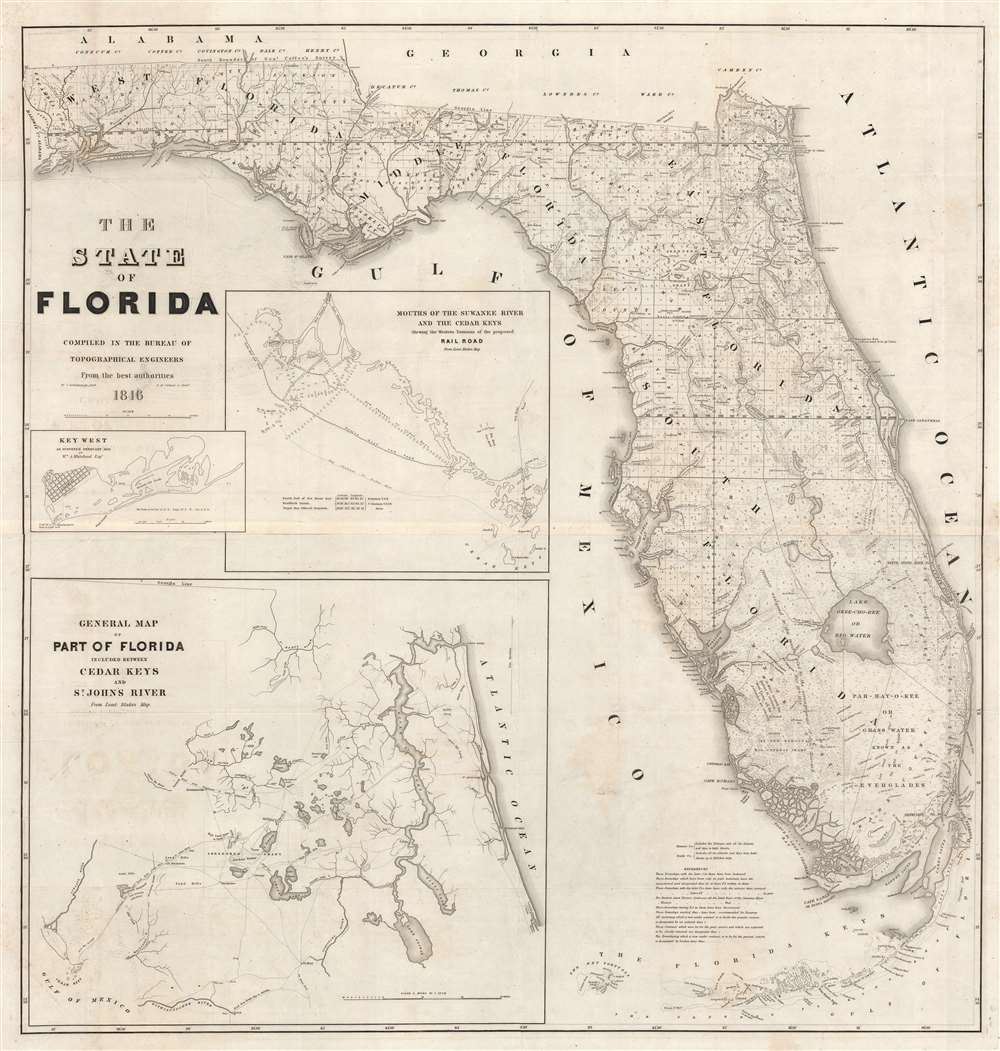 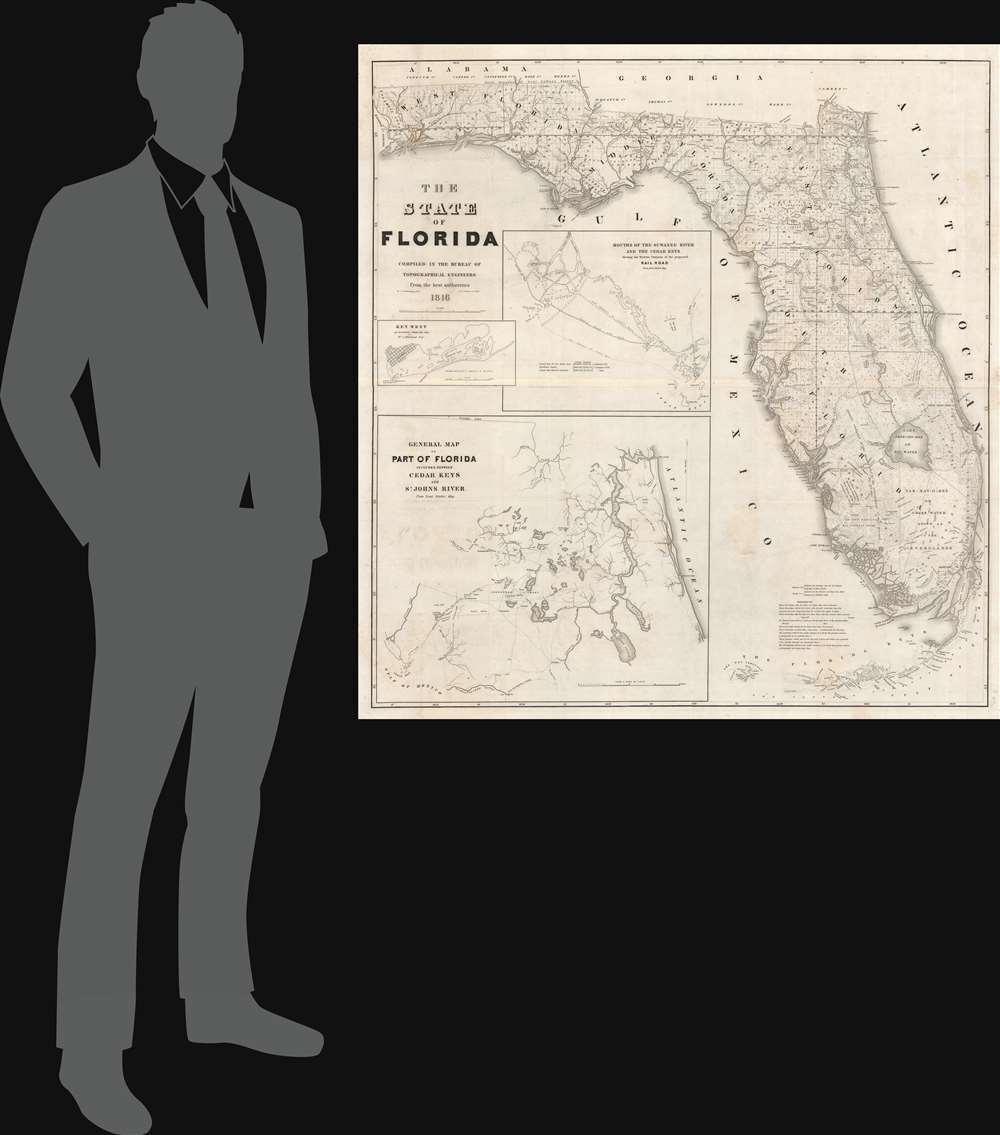 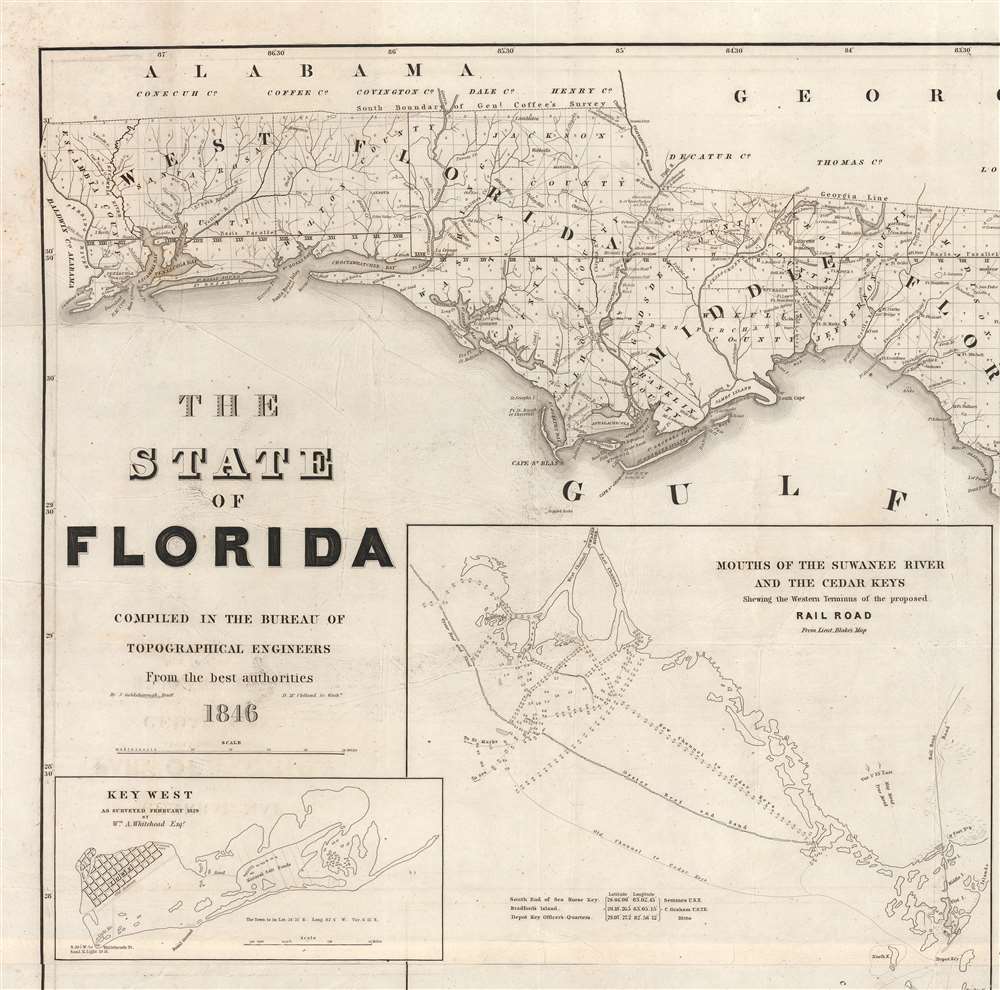 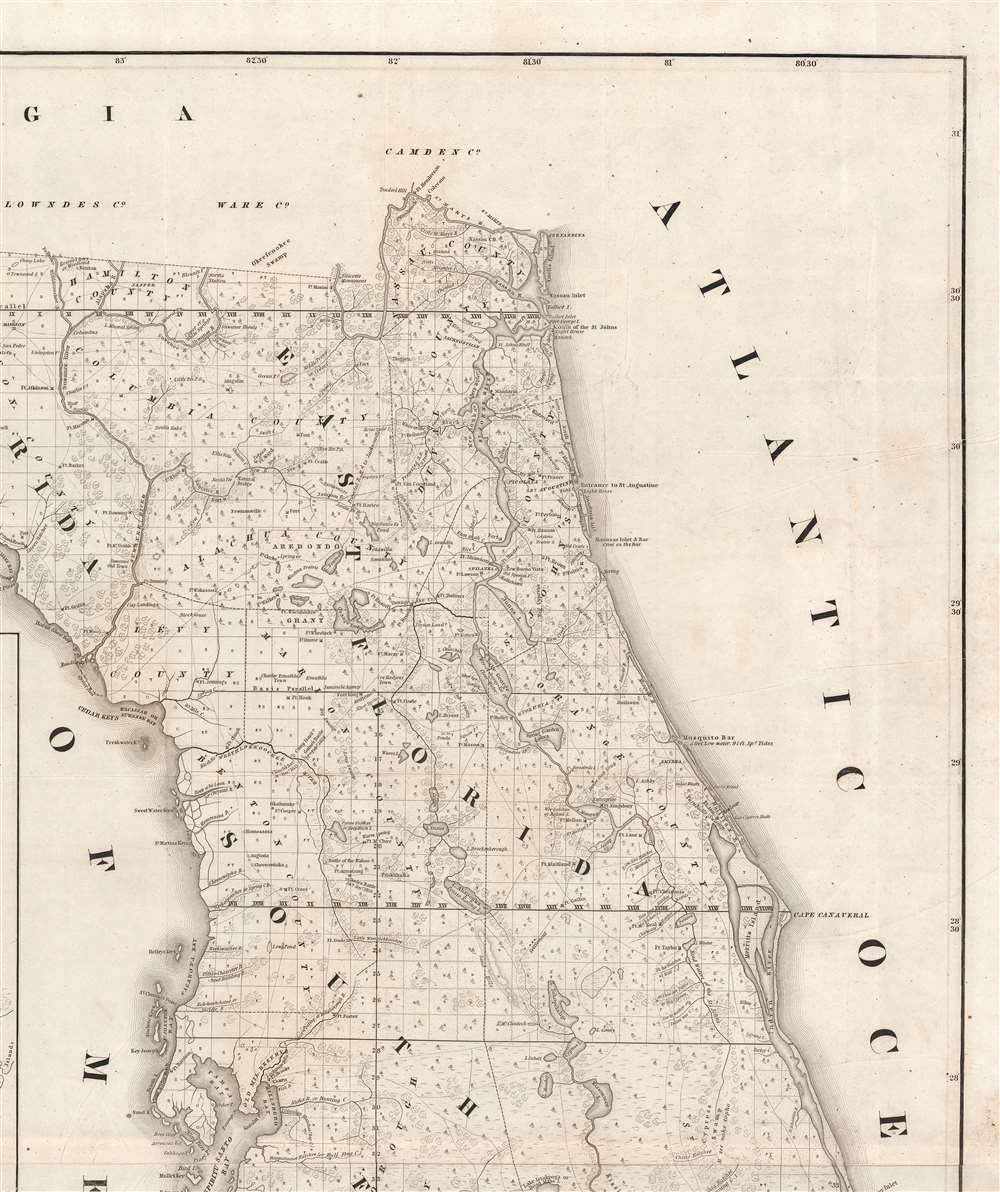 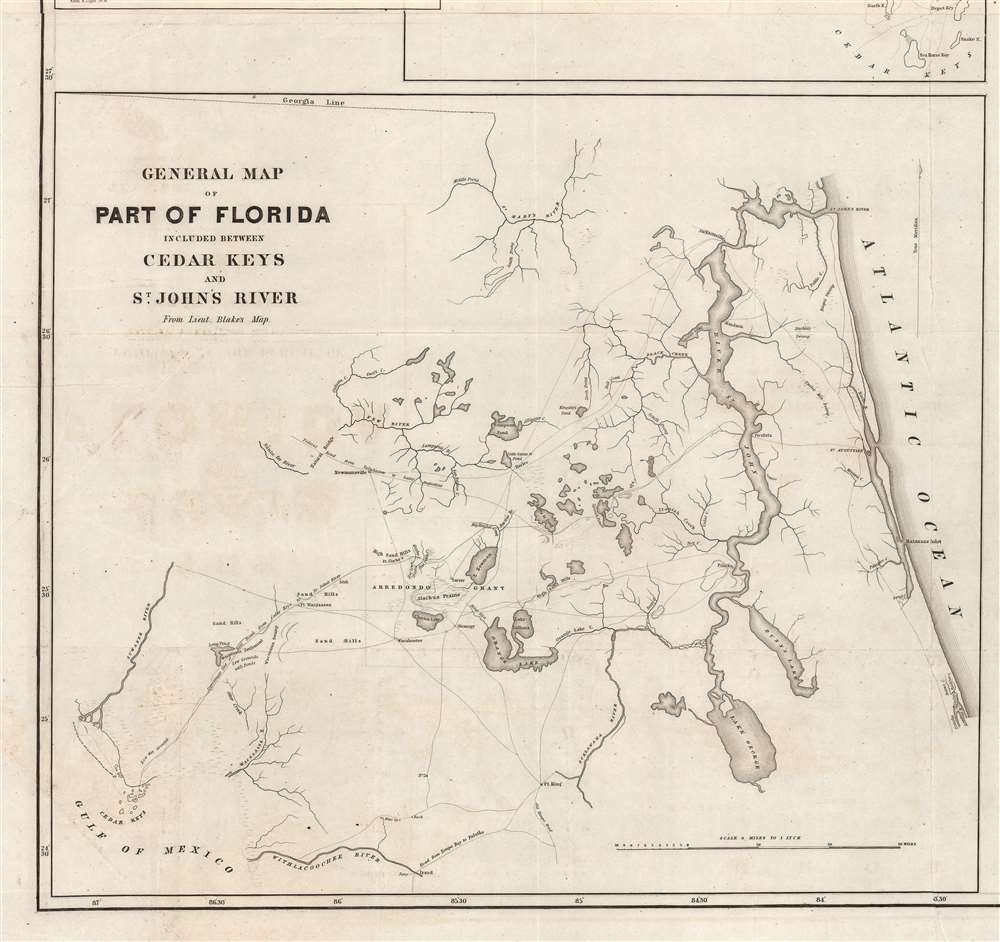 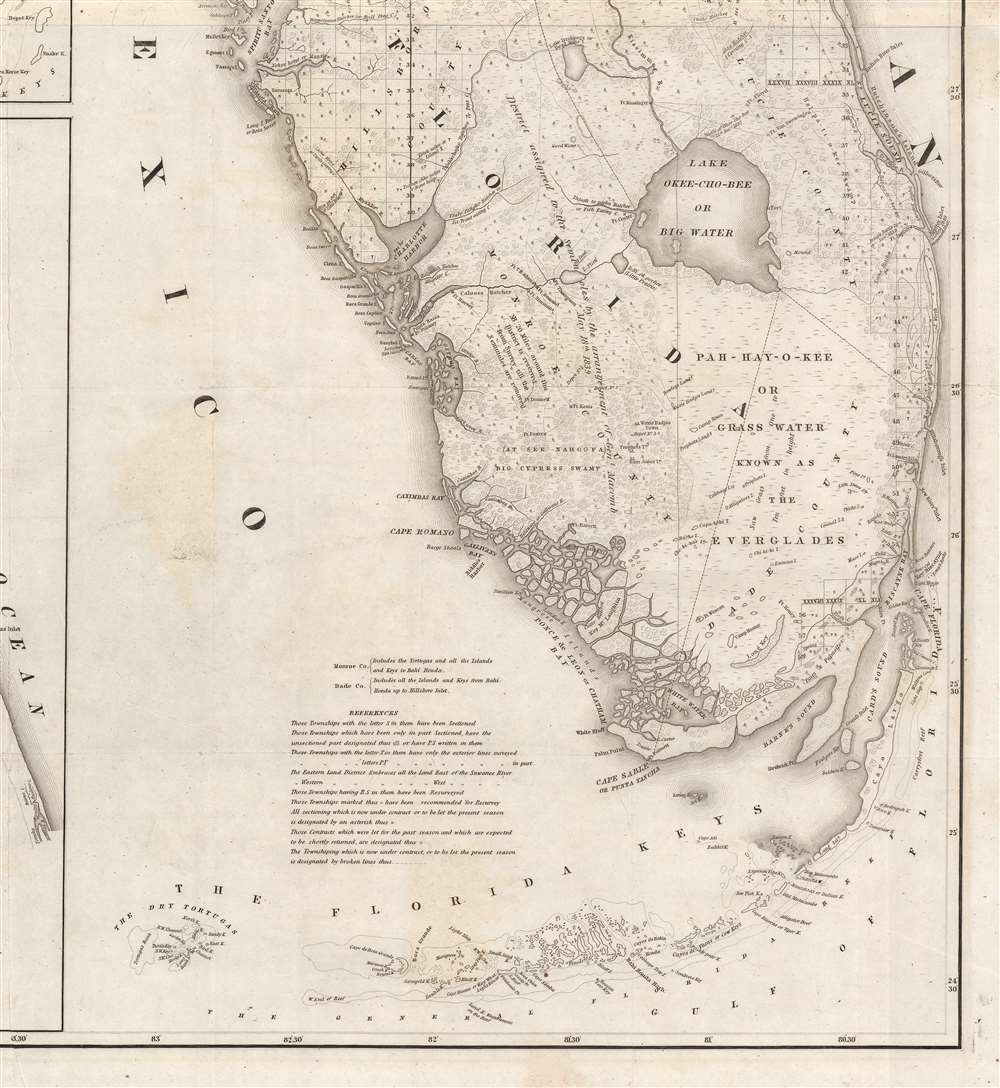 The most important map of Florida, issued 1 year after statehood at the end of the Second Seminole War.

The first official map of the State of Florida, this spectacular production was issued in 1846, on year after statehood and at the end of the Second Seminole War, by the Army Bureau of Topographical Engineers. The map was drawn by Joseph Goldsborough Bruff, an adventurer, playboy, and civilian contractor working with the Topographical Engineers. It illustrates the state of the Florida survey as of 1846, as well as major events, routes, and settlements associated with the First and Second Seminole Wars. Moreover, the map includes holdover grants from the Spanish era, including Arredondo's Grant and Forbes' Purchase. With unsurpassed detail and scale, this map became the foundational map for most subsequent maps of Florida through the end of the 19th century.

District Assigned to the Seminoles by the arrangement of Gen. Macomb May 18th 1839.

The second is a conflicting adjacent note that reads,

Clearly, despite an informal end to hostilities in 1842, and the informal Seminole reservation in southwestern Florida, the U.S. Government had not yet given up their ambition to remove the Seminoles to the Indian Territory.

The Second Seminole War was fought as part of the U.S. Government effort to force the Seminole to adhere to the 1830 Indian Removal Act. The mostly guerilla campaign that followed was considered one of the most costly and ineffective wars in American domestic history. Although the overwhelming forces of the United States government took an extreme toll on the Seminole, it proved nearly impossible to fully force them out of their Everglade strongholds. An uneasy peace came to Florida for a time, with the Seminole mostly staying on their lands, and the settlers remaining on the coast. Nonetheless, the U.S. Government continued to push for full Seminole removal, leading to more and more conflict and, ultimately, the Third Seminole War (1855 - 1858).

The map identifies Arredondo's Grant, a holdover from Spanish Florida. Beginning in the 1790s, the Spanish crown offered land grants to people courageous enough to emigrate to Florida or for meritorious service to the crown. Arredondo's grant, named after Fernando de la Maza Arredondo, is located to the west of St. Augustine in Alachua county. It was granted to Arredondo in 1817 by Alexander Ramirez of Havana. After Florida became a possession of the United States in 1821, these grants became a point of contention between the United States government and the grantees. Initially, the U.S. government declared that it would honor the grants so long as the owner could prove legitimacy. Fernando de la Maza Arredondo took his case to the United States Supreme Court, where his rights to the land were affirmed. Eventually, nonetheless, the grant was dissolved by U.S. courts on the basis that it was not properly developed and therefore forfeited.

Forbes' Purchase appears here as a large tract of land in the Florida Panhandle. The lands were acquired from various Lower Creek and Seminole Indian groups in the early 19th century to pay off debt owed to Panton, Leslie and Company (later, the John Forbes company). Panton, Leslie and Company, 'company' being John Forbes (1767 - 1823), were Scottish merchants who actively traded with American Indians in Florida. Under both the British and Spanish, they were granted monopolies in East Florida, but also controlled most of the Indian trade in West Florida. As British Loyalists, they were vehemently against the United States, and actively encouraged their Indian contacts to war against the new nation. When William Paton and John Leslie died, c. 1803, the firm was reorganized around the surviving partner as John Forbes and Company. Over the years, the Lower Creek and Seminole groups accrued enormous debt to the firm. In order to pay the debt, they ceded sprawling tracts of land in the Florida Panhandle to the Spanish government, which intern passed the deeds to John Forbes, hence 'Forbes' Purchase.' Forbes sold most of the land to two merchants from Savannah and Cuba named Richard Carnochan and Colin Mitchel. After Florida became part of the United States, there was an attempt by the government to seize this land, but it was shot down by the Supreme Court. In time it became clear that Forbes Purchase was mostly uninhabitable swampland, near impossible to develop, and so was ultimately sold off in lots.

This map was compiled by Joseph Goldsborough Bruff and engraved by David McClelland. We are aware of only a single edition. This map is well represented institutionally, but uncommon on the market.

Joseph Goldsborough Bruff (October 2, 1804 - April 14, 1889) was an American artist, adventurer, surveyor, and cartographer active in the mid to late 19th century. Bruff was born in Washington D.C., the son of a wealthy physician, dentist, and inventor (coffee grinder). At 16 he was sent to West Point, but shortly afterwards dismissed for dueling. He subsequently signed on a merchant ship as cabin boy, initiating a five-year career as an itinerant seaman. In 1927 he returned to Washington, taking a position as a draughtsman at the Norfolk Naval Shipyard. Shortly thereafter he transitioned to a higher paid position at Fort Monroe, where he remained for 2 years. Gruff had an arrogant entitled character, but his work was exacting and much admired, enough so that in 1839, he was hired as a draftsman for the Army Bureau of Topographical Engineers. There he compiled and published numerous maps from hand-drawn field maps prepared by explorers. His work from this period includes drafting the important exploration maps of John C. Frémont (who became a personal friend), and the first map of Florida after statehood. In 1849, Bruff, like many Americans caught gold fever. He leveraged his connections in Washington to finance the Washington City and California Mining Association. The well-funded expedition traveled overland in a caravan of sixty-six men and 14 wagons. While Bruff did not discover gold in California, he did travel extensively throughout he gold region producing numerous important maps and diagrams. He returned to Washington via ship, landing in New York in July of 1851. Back in Washington he took work with the Treasury department in the Office of the Supervising Architect. He helped in the design and construction of the DC Treasury Building as well as Treasury offices around the country. Bruff continued his position with the treasury until his death in 1889, at which time he was the oldest active U.S. Government employee. Bruff is interred at the National Congressional Cemetery in Washington. D.C. Learn More...

Good. Some wear on old folds. Laid down on archival tissue. Some buckling and creasing, as is common with this map due to size and paper thickness.