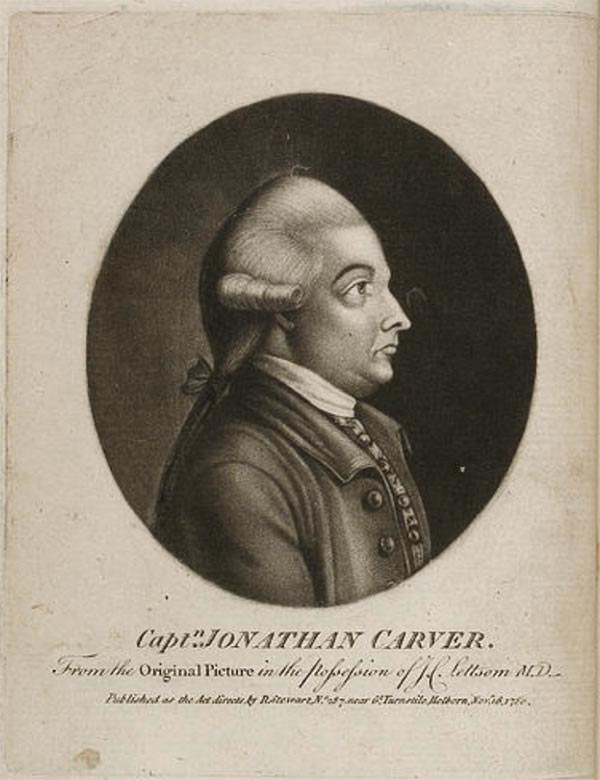 Jonathan Carver (April 13, 1710 - January 31, 1780) was am American explorer, cartographer, and writer active during the colonial period. He was born in Weymouth, Massachusetts and, During the French and Indian War (1754 - 1763), saw action with the Massachusetts Militia. During the war he was able to learn mathematics and military surveying. He was elevated to the rank of captain and given charge of a regiment in 1761. When the war ended Carver determined to explore the new British territories ceded by the Treaty of Paris. In 1766 he was hired by the frontiersman and Royal Governor Robert Rogers to lead an expedition in search of an interior water route to the Pacific. He explored parts upper Mississippi basin in the vicinity of modern day Wisconsin, Minnesota, and Iowa. In 1769, after the expedition which ended in significant new cartography and Carver believing he may have found a water route to the Pacific. In the meantime, Rogers, his patron, was arrested and court-martialed for treason. Carver was caught in the fallout from Rogers' court martial and his discoveries were never formally recognized. Seeking redress from the crown, Carver traveled to England where his requests where heard. He never received a reward for discovering the Northwest Passage, but he was awarded two separate grants in North America. Carver's cartographic information passed into the hands of Robert Sayer who incorporated some if it his maps. While in England Carver also completed his memoires. Published in 1778, the book, Travels through the Interior Parts of North America, in the Years 1766, 1767 and 1768 was an instant success. He died one year later in 1780. In 1804, several of carver's descendants portioned the U.S. Congress for ownership of a large supposed grant in Wisconsin and Minnesota – apparently given to him by the Sioux while he was exploring the region. The U.S. Congress ultimately denied the claims and the (probably) fraudulent grants were formally voided.