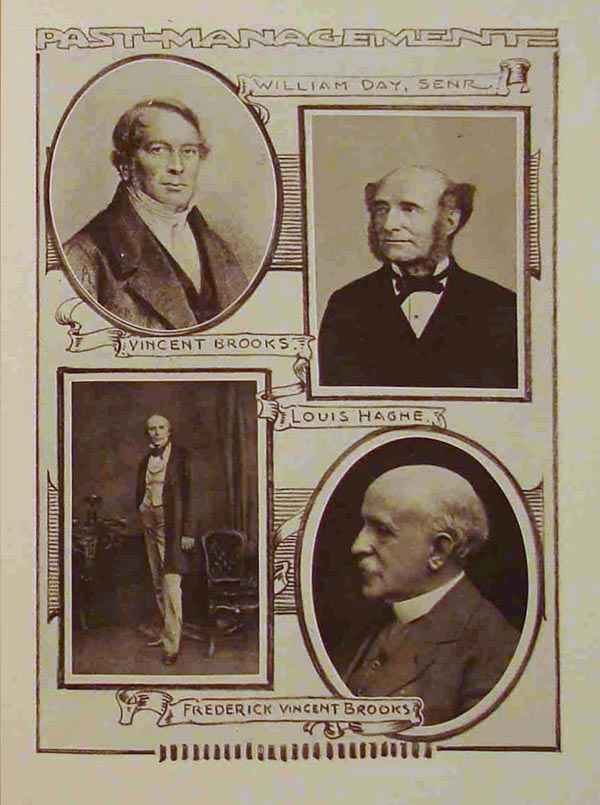 Day and Haghe (1830 - 1852) was a British lithograph firm founded in 1830 by Louis Haghe (March 17, 1806 - March 9, 1885) and William Day (1797 - 1845). Louis Haghe was born in Tournai, Belgium, the son and grandson of prominent Belgian architects. Haghe had a fondness for watercolor painting and turned his attention to the nascent art of lithography. He set up his first lithographic press in Tournai, but did not truly prosper until he moved to London in 1823. There, in 1830, he partnered with William Day to found 'Day and Haghe.' Day and Haghe engraved and printed lithographs detailing hunting scenes, architecture, topographical views, genre depictions, city views, and more. They pioneered the new techniques for chromolithography as well as issuing hand-tinted lithographs. In 1837, Day and Haghe became the only lithographers to receive the prestigious Royal Warrant wherein they were appointed 'Lithographers to the Queen'. The firm is most famous for producing the 250 images for David Roberts' The Holy Land, Syria, Idumea, Arabia, Egypt, and Nubia, 1842 - 1849. Although Haghe remained with the company, as early as the 1840, he left most of the management to Day. When William Day died in 1845, the firm's management fell to his son, William Day Jr. Haghe formally left the firm to persue art in 1852, after which the imprint changed to 'Day and Son.' Day and Son went into liquidation in 1867 and was acquired by Vincent Brooks (1815 - 1885). Brooks owned the firm outright, but kept the prestigious Day name, publishing under the imprint of 'Vincent Brooks, Day and Son' until the firm went defunct in 1940.