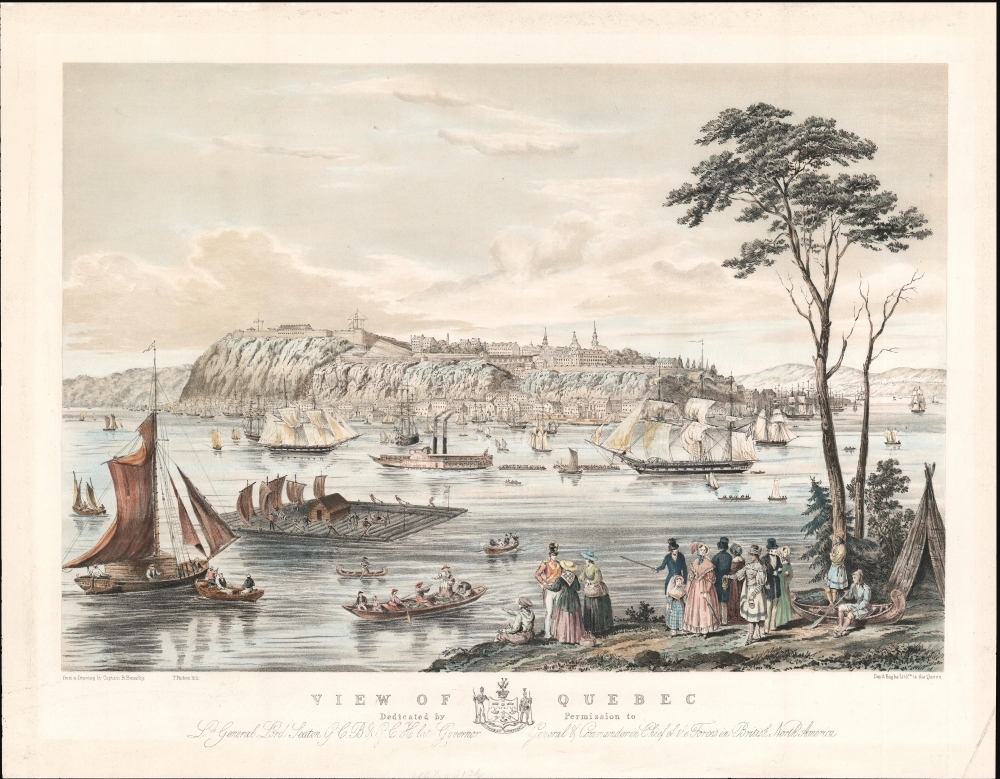 A stunning view of Quebec City, Canada, issued c. 1845 based upon a painting by Benjamin Beaufoy. The view looks on Quebec from Point Levi, southeast of the city across the Saint Lawrence River. The Citadelle de Québec appears at the highpoint at left - emphasizing the city's defensibility. The Basse-Ville or 'Lower Town' sprawls at the base of the cliffs, facing a busy waterfront. All kinds of watercraft, ranging from sail and steamships, to logging rafts, rowboats, and fishing craft ply the waters of the Saint Lawrence. In the foreground, well-dressed citizens converse with a British Officer while two stylized American Indians lounge with their canoe near a tipi (despite the fact that indigenous American Indian groups in this region did not use this type of lodge). The inclusion of American Indians in this image, wearing somewhat Europeanized clothing, is doubtless intended to convey the city's good relations with the local indigenous population. The view is dedicated to Lt. General Lord Seaton G. C. B. and G .C. H. Late Governor General and Commander in Chief of the Forces in British North America.

Quebec at this time was one of the largest and most important cities in North America. The city served as a collection point for Canadian lumber, which would then be shipped on to markets elsewhere in the Americas and Europe - as is evidenced by the raft illustrated prominently in the foreground.

This view is based upon a painting by Benjamin Beaufoy, a British army officer stationed in Quebec. It was engraved in London by Thomas Picken and printed by the lithographic firm of Day and Haghe. There is no date, but we know that the view must have been printed while Beaufoy was a Captain, between 1840 and 1851. This print is rare. We have identified several examples in institutional collections in Canada and the UK, but it has a limited market history.

Benjamin Beaufoy (1814 - 1879) was a British topographical engineer and artist. Beaufoy joined the British Army in 1810 and served in Canada with the South Wales Borderers (24th Foot). He attained attaining the rank of Lieutenant in 1837, Captain in August 14, 1840, and Major in 1851, and honorary Lieutenant-Colonel in 1855, when he retired from military service at full pay. Beaufoy is elusive, as there were several individuals of this name active at the time in Canada and in the British Army.


Thomas Ashburton Picken (1818 - March, 1891) was a Scottish artist, engraver, and lithographer active in Camden Town, London during the middle part of the 19th century. Picken was born in Govan, Scotland, but was active in London from at least 1838. Thomas's brother, James Channing Picken (1817 - 18??) was also a lithographer. Neither Picken ever married. Thomas died in Holburn, London.


Day and Haghe (1830 - 1852) was a British lithograph firm founded in 1830 by Louis Haghe (March 17, 1806 - March 9, 1885) and William Day (1797 - 1845). Louis Haghe was born in Tournai, Belgium, the son and grandson of prominent Belgian architects. Haghe had a fondness for watercolor painting and turned his attention to the nascent art of lithography. He set up his first lithographic press in Tournai, but did not truly prosper until he moved to London in 1823. There, in 1830, he partnered with William Day to found 'Day and Haghe.' Day and Haghe engraved and printed lithographs detailing hunting scenes, architecture, topographical views, genre depictions, city views, and more. They pioneered the new techniques for chromolithography as well as issuing hand-tinted lithographs. In 1837, Day and Haghe became the only lithographers to receive the prestigious Royal Warrant wherein they were appointed 'Lithographers to the Queen'. The firm is most famous for producing the 250 images for David Roberts' The Holy Land, Syria, Idumea, Arabia, Egypt, and Nubia, 1842 - 1849. Although Haghe remained with the company, as early as the 1840, he left most of the management to Day. When William Day died in 1845, the firm's management fell to his son, William Day Jr. Haghe formally left the firm to persue art in 1852, after which the imprint changed to 'Day and Son.' Day and Son went into liquidation in 1867 and was acquired by Vincent Brooks (1815 - 1885). Brooks owned the firm outright, but kept the prestigious Day name, publishing under the imprint of 'Vincent Brooks, Day and Son' until the firm went defunct in 1940.