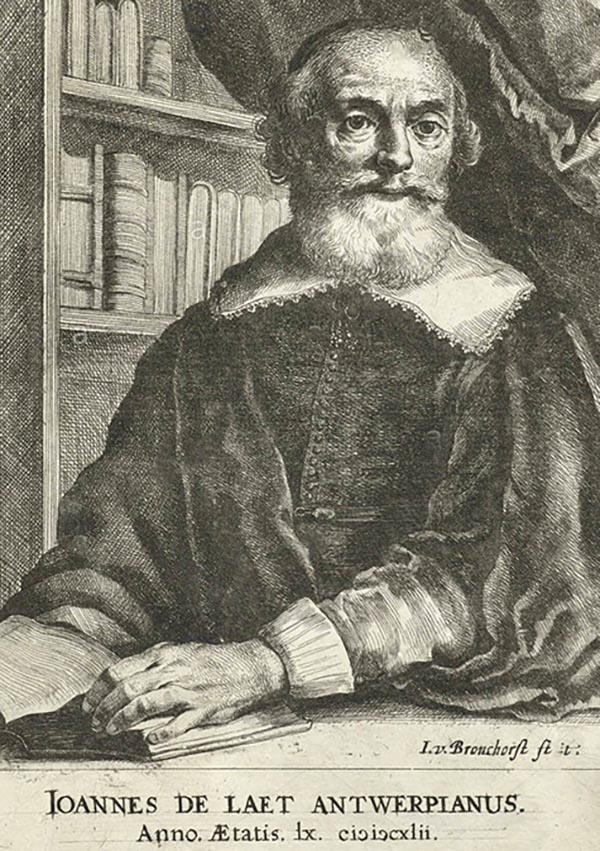 Johannes de Laet (1581 – December 15, 1649) was a Dutch businessman and cartographer active in Leiden during the early 17th century. De Laet was a Flemish Protestant born in Antwerp to a prosperous merchant family in the cloth trade. When Antwerp fell to the Catholic Spanish in August of 1585, he and his family fled to the northern Netherlands. At the University of Leiden, he studied Theology and Philosophy, matriculating in 1597. In 1603 he relocated to London, where he acquired denizenship, an early type of citizenship and married. His Anglo-Dutch wife died shortly afterward and he returned to Leiden, where he married again. He cleverly invested in Dutch land reclamation projection and the overseas trade, becoming extremely wealthy. In 1620, he became a founding director of the Dutch West Indies Company, a position he held until his death. His most important cartographic work, Nieuwe Wereldt ofte Beschrijvinghe van West-Indien has been hailed by the map historian Phillip Burden as 'arguably the finest description of the Americas published in the 17th century. It contained several seminal maps of the Americas that significantly advanced cartographic perspectives on the region and served as a foundational work for subsequent cartographers. De Laet died in Den Haag (The Hague) in 1649.