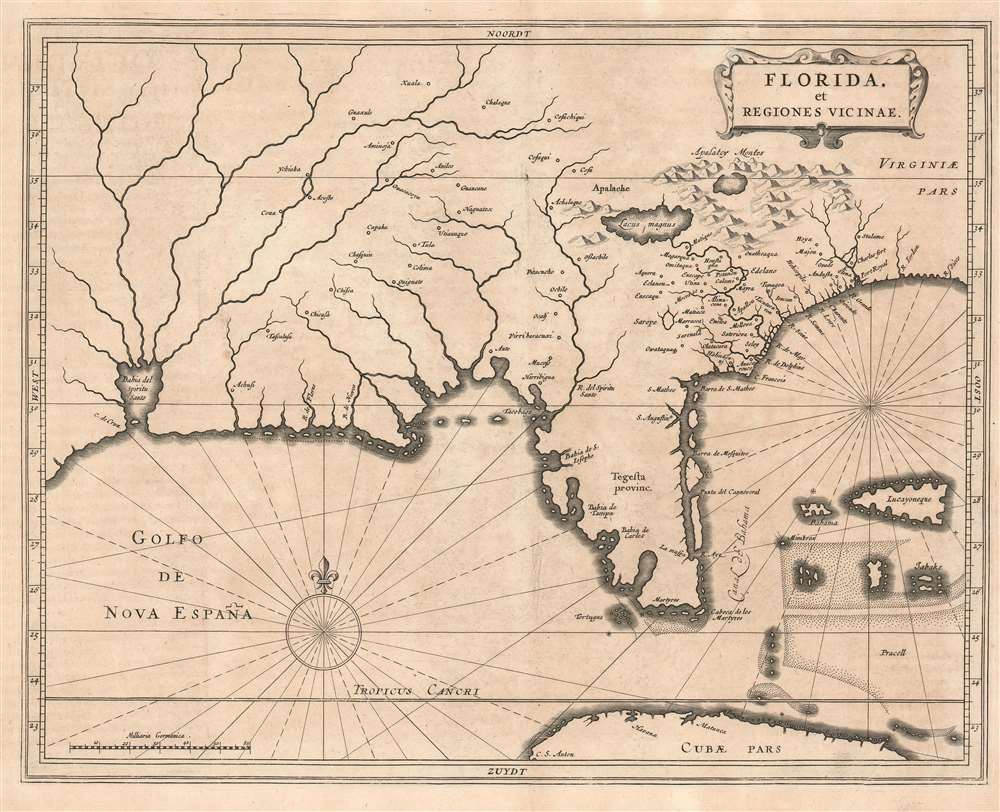 A foundational map of the America Southeast and the first to use the term 'Tegesta' to identify peninsular Florida.
$6,000.00

One of the great foundational maps of the American southeast, this is Johannes de Laet's 1630 map of Florida. Florida, at the time, referred to a vast region extending from Virginia to the Mississippi Valley, and this map correspondingly covers that region. De Laet based the map on a variety of sources, particularly on the Cornelius Claesz's 1602 interpretation of Jacques Le Moyne's map of 1591, the Abraham Ortelius-Hieronymo de Chaves map of 1584, and the Mercator-Hondius map of 1606.

This is the first map to apply the name Tegesta (Tegesta Provinc.) to what is today Florida. The Tegesta (Tekesta, Tegesta, Chequesta, Vizcaynos) were an American Indian tribe living in the southeastern parts of Florida, including most of Miami-Dade county and the Florida Keys. Their main village was on Biscayne Bay, where they encountered Juan Ponce de León, Pedro Menéndez de Avilés, and the French settlers under Rene Goulaine de Laudonnière. They played a significant role in the early European settlement and exploration of Florida. The term Tegesta, as applied to Florida, was followed by most other cartographers in the subsequent decades until the prominence of the English settlements to the north pushed Spanish 'Florida' ever further south. As for the Tegesta, they persisted in the region until 1763 when, with the Spanish surrender to Great Britain, they evacuated to Cuba.

It has been argued that the great bay in the western part of the map, 'Bahia del Spiritu Santo,' may be an early representation of the Mississippi River Delta. It certainly seems to be the source of a great inland system, but one bearing no serious resemblance to the Mississippi, either in the form of the delta or in the river system itself. The earliest maps of the Gulf of Mexico to show the 'Bahia del Spiritu Santo' place it in the northwestern quadrant of the Gulf, in the vicinity of Galveston or Matagorda Bay. Some later maps, such as the present map, move 'Bahia del Spiritu Santo' to a region just to the west of Florida where, it again is out of place for the Mississippi, but could possibly represent Mobile Bay. While serious exploration was limited, there were navigators who claimed to be familiar with the Gulf Coast even in the early 16th century. It is not unlikely that written accounts of visits to the Gulf Coast resulted in many of the bays there being discovered, but not formally triangulated or entered into record. In interpreting these accounts, it is not hard to imagine confused cartographers applying established nomenclature to unrelated geographical elements. Either way, we find the theory that 'Bahia del Spiritu Santo' has relationship to the Mississippi to be untenable.

A Mix of Accuracy and Error

The eastern region appears to derive from the Mercator-Hondius map of what constitutes modern day Georgia and South Carolina. This region was tenuously mapped by the French during their disastrous attempt to settle the Florida between 1552 and 1565, when they were finally driven out by the Spaniards of St. Augustine. Le Moyne was part of this expedition and, although the French settlers likely did very little actual mapping of the interior, good terms with the indigenous Floridians did enable them to produce an impressive and surprisingly accurate early map of the southeast. The Le Moyne-De Bry map, as it is known, identifies several major lakes in the interior of Florida, some of which are noted here. Nonetheless, where Le Moyne was surprisingly accurate, this interpretation, based on Mercator-Hondius, is surprisingly erroneous.

The most significant deviation from Le Moyne’s map is Hondius’ placement of the River May and Lake Apalachy, here identified as the 'Lacus Magnus.' Where Le Moyne correctly mapped the River May (St. John’s River, Florida) in an inverted 'V' form, first heading north, then south to meet with a large inland lake (in all likelihood Lake George or one of the other great inland lakes of Florida), Hondius maps the course of the May heading from the northwest, thus relocating the 'Lacus Magnus,' or as described by Hondius, 'Lacus Aquae Dulcis,' far to the north. This error can be understood in terms of magnetic variation, temperature issues associated with isothermal lines, and navigational errors related to the confusion of the star Asfick with Polaris. While Le Moyne correctly located the mouth of the River May at 30 degrees of latitude, Hondius maps it between 31 and 32 degrees. This may have caused an erroneous association of the River May with the Savannah River. Thus, while the River May dips southward, the Savannah River heads almost directly northwest into the Appalachian Mountains, forming the modern southern border of South Carolina. Hondius, no doubt taking his cue from navigators who rarely trekked inland, therefore rerouted the May River to flow from the northwest. Without an accurate picture of the interior, Hondius followed Le Moyne’s example and translocated the great freshwater lake to the north. Others have speculated that Le Moyne’s River May is in fact the St. John’s River, and that the 'Lacus Magnus' is the Okefenokee Swamp – but this argument does not coincide with most scholarship. The influence of the Mercator-Hondius firm was so pronounced in Europe that most subsequent cartographers followed their lead, specifically, in this case, De Laet. The 'Lacus Magnus' or 'Lacus Aquae Dulcis,' or 'Great Freshwater Lake of the Southeast,' is of course apocryphal, but it appeared on maps well into the 18th century.

Another curious and striking element drawn directly from the Le Moyne map is the curious lake just to the northeast of the 'Lacus Magnus.' In the Le Moyne map this lake is fed by a great waterfall, which has been the cause of considerable curiosity. To our knowledge, there are but two maps that depict this lake with the waterfall, the original Le Moyne map and the Mercator-Hondius Map. This map by De Laet includes the lake, but curiously deletes the waterfall. Moreover, close study shows that not only was the waterfall removed, but it was scratched out of the original plate, along with the northern shore of the lake, sometime after the plate was cut. Scholarship suggests that there is only one plate of this map, but we would not be surprised if, at some point, an earlier unpublished proof state including the waterfall is discovered. This smaller lake disappeared from most subsequent maps.

This map is one of a series of North American maps that accompanied Johannes de Laet's Nieuwe Wereldt ofte Beschrijvinghe van West-Indien. It was engraved by Hessel Gerritsz, who had been the official cartographer to the Dutch East India Company since 1617. As such he would have had access to unpublished voyage data, which doubtless found its way into this map. Ultimately it was the best map of the region at the time of publication and its influence was significant. Subsequent cartographers, including Blaeu, Jansson, and Sanson, followed De Laet's model and nomenclature. An essential piece for regional southeast and Florida collectors.

Johannes de Laet (1581 – December 15, 1649) was a Dutch businessman and cartographer active in Leiden during the early 17th century. De Laet was a Flemish Protestant born in Antwerp to a prosperous merchant family in the cloth trade. When Antwerp fell to the Catholic Spanish in August of 1585, he and his family fled to the northern Netherlands. At the University of Leiden, he studied Theology and Philosophy, matriculating in 1597. In 1603 he relocated to London, where he acquired denizenship, an early type of citizenship and married. His Anglo-Dutch wife died shortly afterward and he returned to Leiden, where he married again. He cleverly invested in Dutch land reclamation projection and the overseas trade, becoming extremely wealthy. In 1620, he became a founding director of the Dutch West Indies Company, a position he held until his death. His most important cartographic work, Nieuwe Wereldt ofte Beschrijvinghe van West-Indien has been hailed by the map historian Phillip Burden as 'arguably the finest description of the Americas published in the 17th century. It contained several seminal maps of the Americas that significantly advanced cartographic perspectives on the region and served as a foundational work for subsequent cartographers. De Laet died in Den Haag (The Hague) in 1649. Learn More...