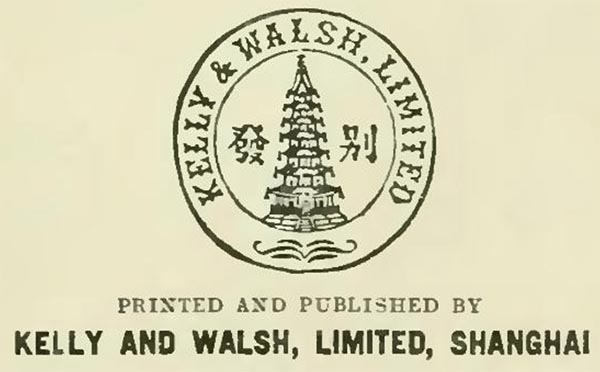 Kelly and Walsh (1876 - present) was a Shanghai based and managed publishing concern founded in 1876. The firm was organized around the consolidation of the Yokohama and Shanghai based Kelly and Company, owned by the Irish printer John M. Kelly, and the Scottish booksellers F. and C. Walsh. The firm was formally incorporated in Hong Kong on July 1 of 1885, when it sold some 1350 shares, most to Thomas Brown, a Shanghai resident to acquired 1114 of the outstanding shares. The remainder were acquired by a variety of stationers ad printers a 11 Bund, Shanghai, presumably Kelly and Walsh employees as this was their operating address (later they relocated to 66 Nanking Road in 1918, with offices also at 12 Nanking Road). The firm was most active from the 1870s to the 1940s, when it expanded into a variety of related business: bookseller, stationer, publisher, printer, lithographer, book binder, die engraver, color stamper, India rubber stamp manufacturer, news agent, music seller, commission agent, and tobacconist. There is some evidence that Kelly was active in Providence, Rhode Island, acquiring partial interest in the firm of Bubee and Hall, but it is unclear if in divested of his Asian interests. By the outbreak of World War II they had offices in Hong Kong, Yokohama, Tokyo, Singapore and Hankou (Wuhan). When the Japanese occupied Shanghai, the firm moved its management offices to Hong Kong, where it was acquired by Swindon Book Company in the 1950s. The Singapore branch of Kelly and Walsh, established in the prestigious Raffles Palce, operated an English language bookshop through from about 1881 to about 1956, publishing more than 200 titles and having its own bindery. The firm still operates a small chain of swank bookstores in Hong Kong.