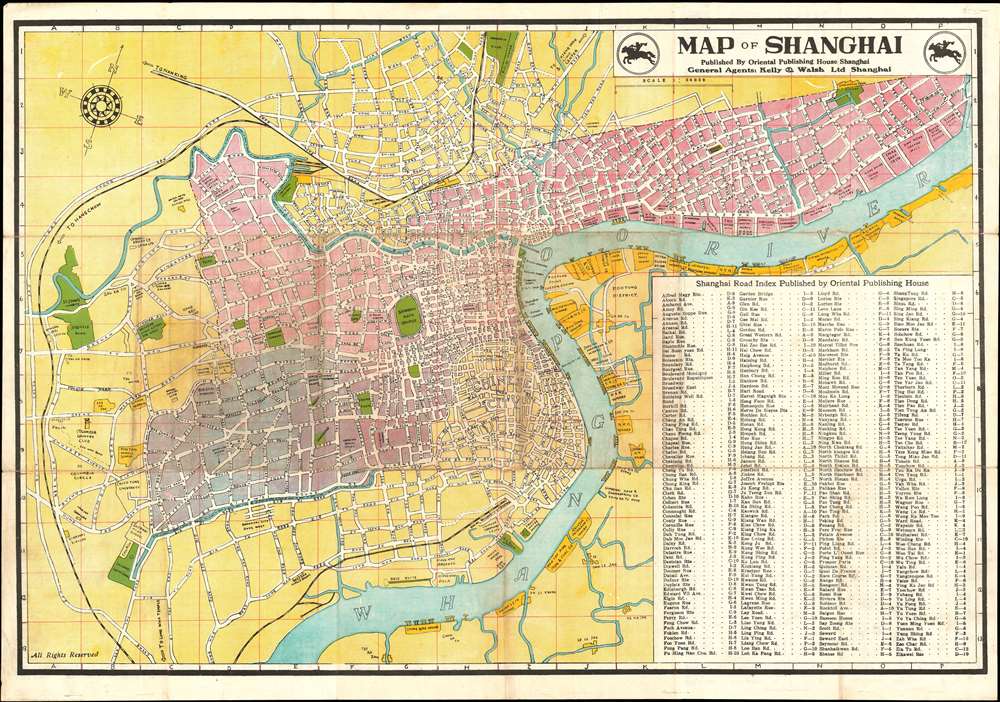 An uncommon 1946 English language map of Shanghai, China issued by the Oriental Publishing House for the firm of Kelly and Walsh. The map centers on the old Chinese city, with its former circular walls apparent. The former International Settlement is colored pink, while the French Concession is purple. Along the Bund, various privae clubs, hotels, banks, and other business are noted. ‘Pootung’ (Pudong), across the Huangpu River, is largely undeveloped but warehouses lining shore. All streets are labelled, and an extensive street index occupies the lower right quadrant. The verso features a handy table reconciling old European street names and the ‘new’ Chinese names adopted following the collapse of the concession system.

The End of Extraterritoriality in Shanghai

The map illustrates an ephemeral and often ignored period in the history of Shanghai, and China in general, between the end of World War II (1939 - 1945) and the Communist Revolution of 1949. Shanghai was still reeling from years of brutal Japanese occupation - which ended just one year before this map was published. During the War, the British, American and French concessions suffered under the Japanese occupation and were ultimately ended. The British and American concessions were terminated in 1943, when the International Settlement (pink) was retroceded to China. The French (purple) retained their concession until 1946, one year after the war, when it too was retroceded back to China. The table on the back of the map, which reconciles old European and new Chinese place names, is emblematic of the transition Shanghai was then undergoing.

China itself was in the midst of a Civil War between the Kuomintang (KMT) government of the Republic of China and the Communist revolutionaries. With the end of extraterritoriality in Shanghai, the destruction of the Japanese Occupation, and the destabilizing effects of the Kuomintang-Communist Civil War, foreign residents and businesses fled Shanghai for safer harbors in Hong Kong and elsewhere. When the Chinese Communist Party finally took control of Shanghai in 1949, just four years after this map was issued, foreign influence and investment was systematically terminated.

This map was printed in Shanghai in 1946 by the Oriental Publishing House, agents of the publishing firm Kelly and Walsh. This map is scarce. The OCLC identifies three examples in institutional collections, at Cornell, U.C. Berkeley, and the National Library of Australia. Most (but not all) examples are dated on the cover, which is attached to the verso, but where the cover is missing, the maps are difficult to date. Versions of the map may have been issued as early as 1925, but we have been able to verify no edition earlier than 1941. The present example is the first edition issued after World War II.

The OCLC identifies three examples in institutional collections, at Cornell, U.C. Berkeley, and the National Library of Australia. We are aware of at least 2 in private collections.