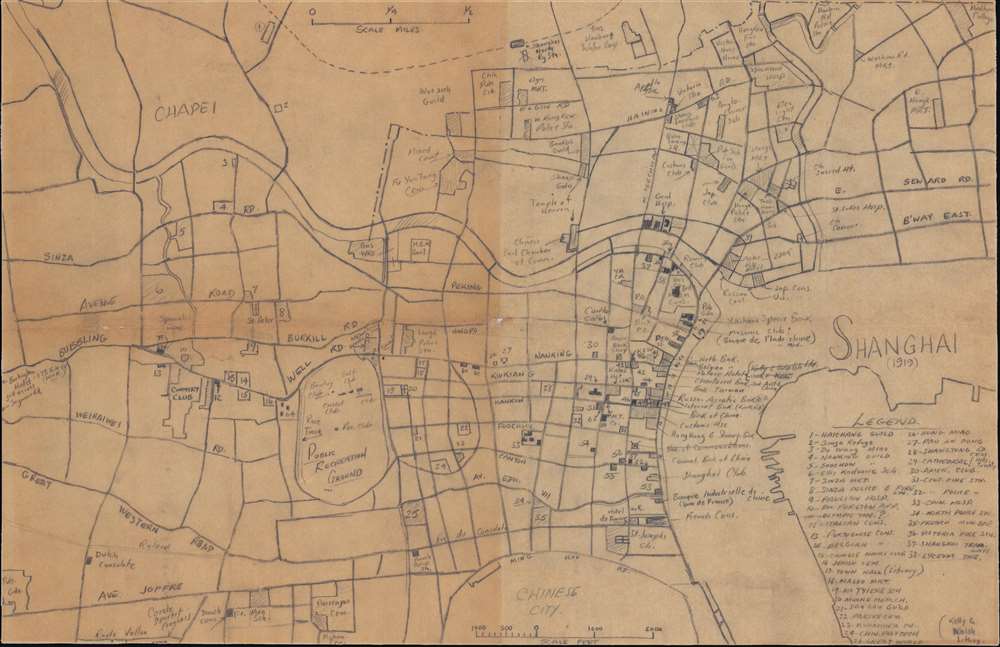 This is a unique 1919 Kelly and Walsh manuscript map of Shanghai - most likely the original working draft for Shanghai map included in Charles Ewart Darwent's Shanghai: a handbook for travellers and residents…. It dates from the height of the treaty port era, when Shanghai was home to dozens of nationalities inhabiting three distinct administrative zones: the International Settlement, the French Concession, and the Chinese-administered areas of the city.

This map has a number of annotations showing that information was inaccurately recorded at first or changed in the course of creating the map. Most notably, Kelly and Walsh's own office appears to have relocated from the Palace Hotel on the Bund as their name is crossed out. A number of other institutions are crossed out or followed by a question mark.

The Height of the Treaty Port Era

Although it was already a sizable port by 1842, Shanghai expanded at a tremendous pace when it was designated a treaty port after the First Opium War. British and French traders and missionaries were leased land outside of the walled 'Chinese City' (at bottom), particularly along 'the Bund,' the riverfront of the Huangpu River up to Suzhou Creek (unmarked, but the mouth of the creek is near the Russian Consulate and the Rowing Club). Due to the extraterritoriality clauses of the Treaty of Nanjing and subsequent 'unequal treaties,' over time the areas where Westerners resided effectively became exempt from Chinese jurisdiction. In 1862, the French split with the Americans and British, creating a distinct French Concession, causing the 'Anglos' to form the International Settlement (divided at Avenue Edward VII, today Yan'an Rd., built over a creek known as Yangjingbang 洋涇浜).

As a strategically located entrepôt near the mouth of the Yangtze River, Shanghai quickly became a gateway to the entire Yangtze Delta. The light administration of the foreign concessions led to the city's reputation for economic dynamism, multiculturalism, crime, drugs, prostitution, and urban poverty (the New World, a notorious multi-level entertainment complex near center, combined all of these phenomena in a single building).

The British influence was particularly strong in the International Settlement, leading to the variety of British-style institutions noted here (such as the Shanghai Club, Rowing Club, Country Club, and Public Recreation Ground, where horse and greyhound races were held). Still, the city's elite was a cosmopolitan mix of Europeans, Americans, Japanese, Chinese, and others. Trading diasporas from across China (such as the guilds noted in the legend) and the globe set up shop there, including Baghdadi Jews, whose names (Kadoorie, Sassoon) were synonymous with Shanghai's high society. Since the exact sovereign status of the treaty ports was unclear, Shanghai became a refuge for stateless individuals and refugees, including White Russians and, later, Viennese Jews fleeing the Nazis. Multiple nationalities also formed a subaltern stratum of police officers, servants, small business owners, and entertainers, including Parsis and Sikhs, Annamese, Koreans, Russians, Portuguese (Macanese), and Filipinos.

Aside from breakneck urbanization, Shanghai was undergoing important transformations at the time this map was produced, with Japanese and Chinese entrepreneurs, bankers, and traders making up a growing share of the city's elite, and a fast-growing Chinese middle class of clerks, foremen, and translators filling in expanding residential districts in the French Concession, Zhabei (Chapei at top-left), and Hongkou (towards top-right). Poorer migrants from the countryside, particularly from deeply impoverished Subei (蘇北), lived in subpar housing, often thatched huts, along the outskirts of the modern city and struggled to find work in factories. Those who did not ended up employed as rickshaw drivers, nightsoil (human waste) collectors, and prostitutes.

Given the sketch quality of this map and the annotations, it is likely that this was a draft of a  printed map, almost certainly for Charles Ewart Darwent's Shanghai : a handbook for travellers and residents… published by Kelly and Walsh the following year. It is not known in any institutional holdings and is very scarce to the market.

Very good. On parchment-like draftsman paper. Laid down onto archival tissue for stability. Slight loss at center fold intersections.
Looking for a high-resolution scan of this?