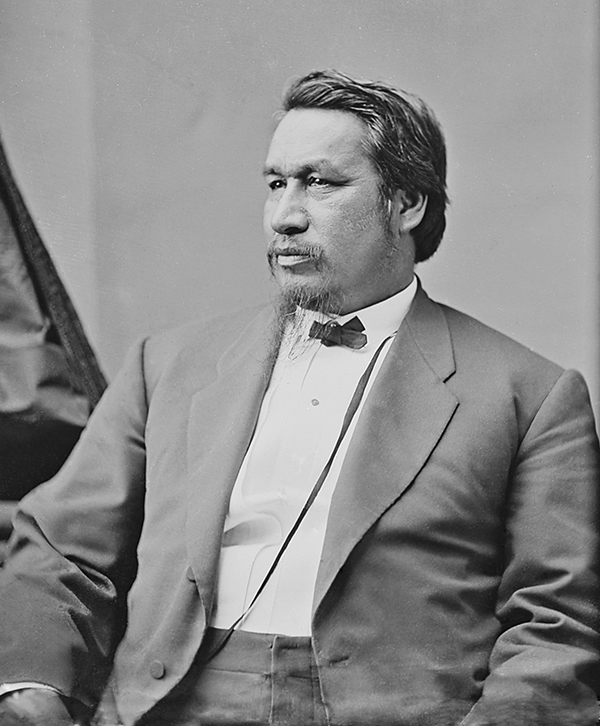 Ely Samuel Parker (1828 – August 31, 1895), born Hasanoanda, later known as Donehogawa, was a Seneca U.S. Army officer, engineer, and tribal diplomat. Born on the Tonawanda Reservation in Indian Falls, New York to a prominent Christian Seneca family, his family frequently interacted with white American scholars interested in the history of the Native Americans of the region, including Lewis Henry Morgan. Like Morgan, Parker trained as a lawyer but later attended the Rensselaer Polytechnic Institute and studied civil engineering. During the 1850s, he helped to upgrade the Erie Canal and also acted as an interpreter for treaty negotiations between the U.S. government and the Seneca nation. Around this time, he met Ulysses S. Grant, who later took Parker on as a member of his staff during the Civil War, a role in which he helped to draft the documents of surrender at Appomattox Courthouse. When Grant became president in 1869, he nominated Parker as Commissioner of Indian Affairs, where Parker pursued a policy of negotiation in place of military actions with Native American tribes in the American West. However, this proved difficult to enact in practice. The guiding philosophy, shared by Parker, was that Native Americans should be moved to reservations and (forcibly) assimilated into American society, which many were not willing to do, especially once they discovered the barren lands that had been assigned to them. When resistance turned to violence, Grant was pressured into using military force in response. Parker himself became the object of corruption charges lobbed by competing 'experts' on Indian affairs who coveted his job and his authority was curtailed as a result. He resigned in protest in 1871.