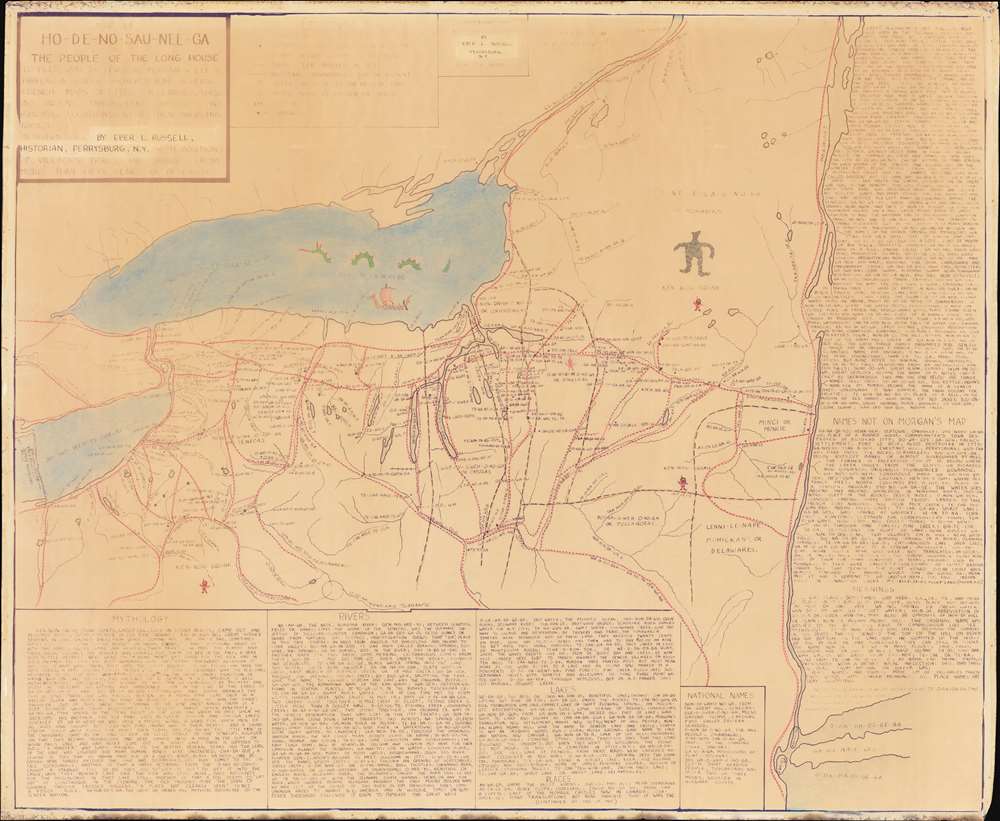 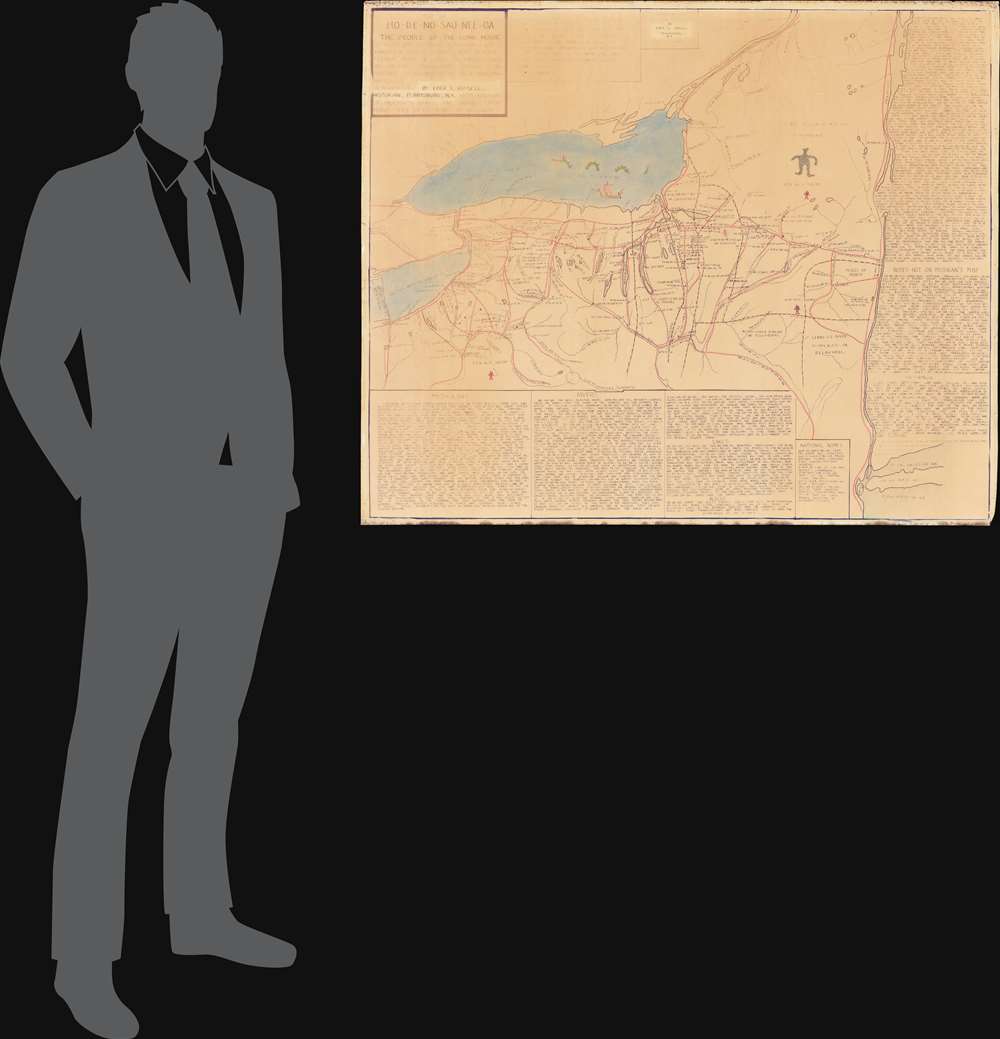 An extraordinary 1962 diazotype map by Eber Russell displaying the Native American (Iroquoian) toponymy for settlements, waterways, and other features in upstate New York and portions of Pennsylvania. One of just 4 surviving examples, this map is the product of more than 50 years of research, and an invaluable resource for understanding the pre-colonial Native American presence in New York. The present work was compiled by Eber Russell, who substantially reworked a 19th century map by Lewis Henry Morgan and Adirondack specialist Ely Samuel Parker, two of the most prominent experts on Native American cultures in their time. Compared to its predecessor, Russell's map is a significantly different work on all levels: substantially larger, more focused, more toponymy, and heavily annotated.

The title refers to Haudenosaunee ('People of the Long House'), the indigenous name of the Iroquois Confederacy or Five Nations (later Six Nations), formed sometime in the 15th-17th century and continuing to the present, consisting of the Mohawk, Oneida, Onondaga, Cayuga, Seneca, and, from 1722, the Tuscarora. A legend next to the title explains the symbols for waterways, villages, trails, approximate borders between nations, and other important sites.

Coverage extends from around what became Erie, Pennsylvania, to the Hudson River, and stretching south to Long Island, Manhattan, and Staten Island at bottom-right, although the focus is on Upstate New York. Many of the indigenous names have clear connections with their modern Anglicizations, such as Cha-da-quet (Chataqua), Gen-nis-hee-yo (Genesee), Ne-ah-ga (Niagara), Gwa-u-gweh (Cayuga), and so on. Russell includes extensive notes on the mythology, history, and placenames (with English translation), including a list of places he has added to those that appeared on Morgan and Parker's map.

The presence of a Viking ship on Lake Ontario is curious; although Russell claims that the Viking presence in America is 'well authenticated,' his map was published only shortly after the discovery of the L'Anse aux Meadows site in Newfoundland. Some thirty years earlier, however, a Canadian prospector claimed to have found Viking artifacts while digging in Port Arthur, Ontario. However, these claims were later found to have almost certainly been fabricated. In any event, Russell drew on the enthusiasm for research on the Viking presence in the Americas to reinterpret the Iroquoian myth of a great canoe on Lake Ontario.

This map was drawn by Eber Russell in 1962 and published in 1963. As a diazo print, a technology capable of making only small numbers of copies, the present map is most likely a pre-publication proof (if it was published at all). We note a copyright entry filed in 1863, but no subsequent printed examples. When we acquired it, in both the title box at top-left and the copyright box at top-center, Russell's name was masked with tape (which we removed), suggesting a working prototype.

This map is rare, with only three institutions listing it among their collections: Harvard, the University of Kansas, and the Holland Land Office Museum. Of these, the first to are also diazo prints, or as they are described by those institutions, 'blue line prints'. We believe the example at the Holland Land Office to be the original Eber manuscript.

Eber LeRoy Russell (March 11, 1881 - October 28, 1968) was an engineer, amateur archeologist, and historian of Native American cultures based in Upstate New York. Eber was born in Collins, New York. He dedicated himself to digging for traces of early American Indian life in the Cattaraugus Valley. In 1925 he was adopted into the Seneca Nation and was latter recognized for his "distinguished service as a true advocate of Indian legend, tradition, and history.' His best-known work was a significant revision and adaptation of Lewis Henry Morgan and Ely Parker's 1851 map of New York, published in their book League of the Ho-deʹ-no-sau-nee or Iroquois. Russell included information based on years of research to greatly expand the toponym in Iroquoian languages and add other details not on the original Morgan/Parker map. Eber's papers are preserved in the Patterson Library of Westfield, New York. Learn More...


Lewis Henry Morgan (November 21, 1818 – December 17, 1881) was an American expert on the Native American cultures of Upstate New York and a founder in the field of ethnology. Expanding on his research on the Iroquois, he developed wide-ranging social theories that were influenced by a superficial interpretation of Darwinism and his own misinterpretation of Haudenosaunee (Iroquois) society. Nevertheless, as an early work in the developing field of ethnology, Morgan's ideas were influential, including on Karl Marx and Friederich Engels, particularly their notion of 'primitive Communism,' due to Morgan's emphasis on the role of the family and property in social evolution. He had a long and significant friendship with Ely Parker, the first Native American Commissioner of Indian Affairs, but the two had something of a falling out when President Ulysses Grant chose Parker instead of Morgan for that post. Learn More...


Ely Samuel Parker (1828 – August 31, 1895), born Hasanoanda, later known as Donehogawa, was a Seneca U.S. Army officer, engineer, and tribal diplomat. Born on the Tonawanda Reservation in Indian Falls, New York to a prominent Christian Seneca family, his family frequently interacted with white American scholars interested in the history of the Native Americans of the region, including Lewis Henry Morgan. Like Morgan, Parker trained as a lawyer but later attended the Rensselaer Polytechnic Institute and studied civil engineering. During the 1850s, he helped to upgrade the Erie Canal and also acted as an interpreter for treaty negotiations between the U.S. government and the Seneca nation. Around this time, he met Ulysses S. Grant, who later took Parker on as a member of his staff during the Civil War, a role in which he helped to draft the documents of surrender at Appomattox Courthouse. When Grant became president in 1869, he nominated Parker as Commissioner of Indian Affairs, where Parker pursued a policy of negotiation in place of military actions with Native American tribes in the American West. However, this proved difficult to enact in practice. The guiding philosophy, shared by Parker, was that Native Americans should be moved to reservations and (forcibly) assimilated into American society, which many were not willing to do, especially once they discovered the barren lands that had been assigned to them. When resistance turned to violence, Grant was pressured into using military force in response. Parker himself became the object of corruption charges lobbed by competing 'experts' on Indian affairs who coveted his job and his authority was curtailed as a result. He resigned in protest in 1871. Learn More...

Good. Some discoloration and loss around edge. Ink fading as is inherent with diazotype maps.