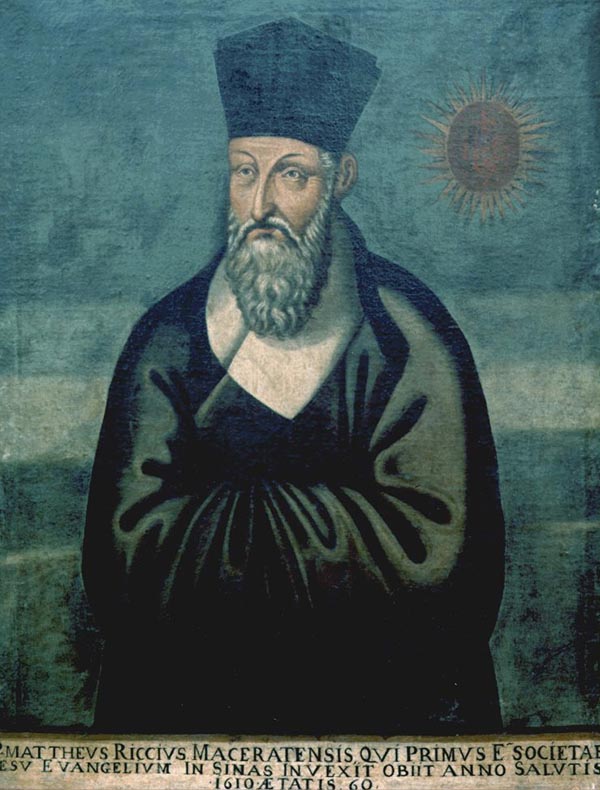 Matteo Ricci (October 6, 1552 - May 11, 1610), was an Italian Jesuit priest noted for his work in establishing the first Jesuit China missions. In the mapmaking world, he represented a conduit of cartographic information - both from Europe to China, introduced the findings of European exploration to a Chinese audience, and from China to Europe, supplying some of the best early maps of China to a Western audience starved of data for the interior of the Chinese Empire. Ricci was born in Macerata in the Papal States of Italy, received his first education there and went on to study law in Rome. While there, he studied philosophy, theology, mathematics, cosmology, and astronomy under the direction of Christopher Clavius. In 1571 he entered the Society of Jesus. In 1577 he would apply to begin missionary work, first to Goa from 1578 to 1582, and then to Macau and China. He was among the first Europeans to study Chinese language and customs, and one of the first western scholars to master Chinese characters and classical Chinese. Accompanied by Michele Ruggieri, he travelled to Canton and then to Zhaoqing, where he would stay from 1583 to 1589 as a guest of the governor Wang Pan. It was here that Ricci produced the first Chinese-Language map based on European geographical knowledge, called 'Complete Map of the Great World' (Da Ying Quan Tu, 大瀛全圖). Ricci and Ruggieri also compiled the first dictionary of Chinese in any European language. He would become the first European to enter the Forbidden City of Beijing in 1601 when invited by the Wanli Emperor, who sought his services in matters such as court astronomy and calendrical science.