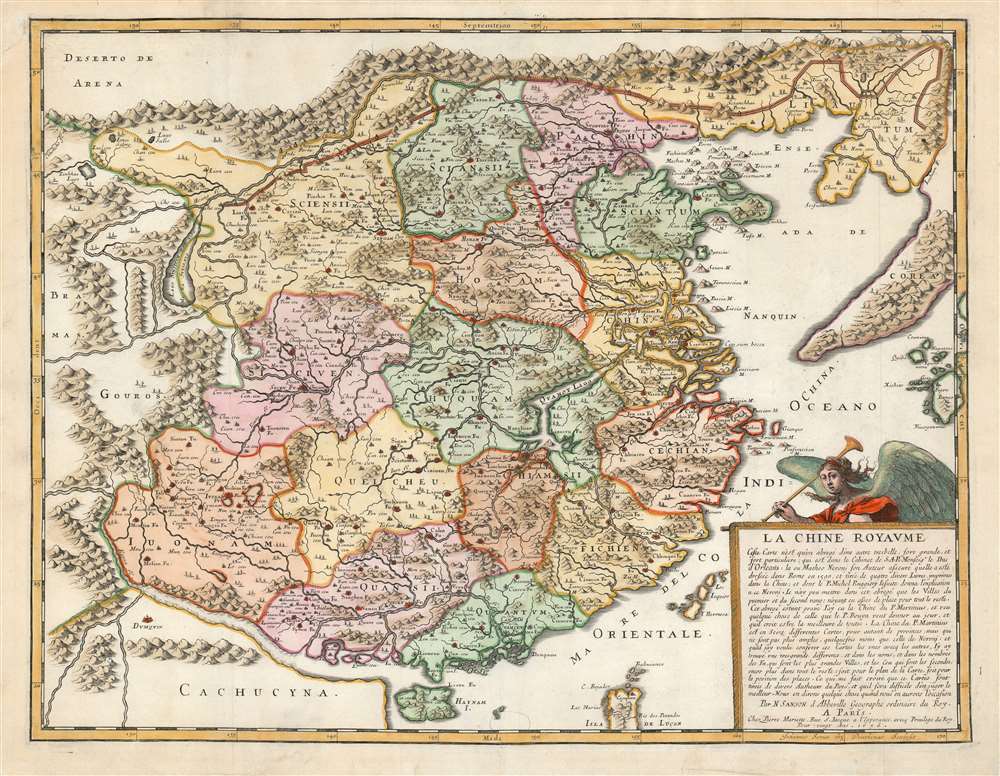 This is an attractive example of Nicolas Sanson's scarce and important map of China and Korea, here in its 1656 first state. Although Sanson credits a notional 'Matheo Neroni' as his source, it is almost certainly actually the Jesuit missionary and cosmographer Matteo Ricci, who composed an important map in 1588 based on Chinese sources. The Great Wall appears prominently. The map extends to show part of the Philippines, including Luzon, and a remarkable, sickle-shaped Korean Peninsula. Taiwan is shown and named 'I. Hermosa,' an early form of 'Formosa'. The southern coast of China looks across a bizarrely-narrow South China Sea to a massively-protruding 'Cachucyna' nearly reaching Hainan Island.

The map's text describes the source for this map as a wall map in the possession of one 'Matheo Neroni' derived from a work drawn in Rome in 1590 and with explanations from Michel Ruggieri; Sanson did not and could not have known Ruggieri, who died in 1607 and there is no evidence to suggest that 'Matheo Neroni' existed at all. Szcześniak in his 1954 Imago Mundi article suggests that 'Neroni' was in fact Matteo Ricci, and that the map was not drawn in Rome in 1590 but brought there from China in that year, having been composed by Ricci in China based on Chinese sources.

The maps Ricci had access to disagreed on the disposition of the Liaodong Peninsula, none of them showing it with precision; they also were imprecise on the depiction of Korea. The portrayal of Korea here, preserved by Sanson in a uniquely sweeping, curvilinear shape, is a result of Ricci's effort to synthesize the disparity in his sources. Many early maps excised Korea entirely; others placed it too far west (by ignoring Liaodong, or conflating the two. The Ricci/Sanson map is remarkable in presenting both, despite the distortion of their shapes.

This is the first state of this map, printed in 1656 for inclusion in Sanson's atlas published two years later by Pierre Mariette. (Later states possess different dating, and change the author's address.) Seven or eight examples of the separate map appear in institutional collections: a similar number of listings for Sanson's Cartes générales are catalogued in OCLC.


Matteo Ricci (October 6, 1552 - May 11, 1610), was an Italian Jesuit priest noted for his work in establishing the first Jesuit China missions. In the mapmaking world, he represented a conduit of cartographic information - both from Europe to China, introduced the findings of European exploration to a Chinese audience, and from China to Europe, supplying some of the best early maps of China to a Western audience starved of data for the interior of the Chinese Empire. Ricci was born in Macerata in the Papal States of Italy, received his first education there and went on to study law in Rome. While there, he studied philosophy, theology, mathematics, cosmology, and astronomy under the direction of Christopher Clavius. In 1571 he entered the Society of Jesus. In 1577 he would apply to begin missionary work, first to Goa from 1578 to 1582, and then to Macau and China. He was among the first Europeans to study Chinese language and customs, and one of the first western scholars to master Chinese characters and classical Chinese. Accompanied by Michele Ruggieri, he travelled to Canton and then to Zhaoqing, where he would stay from 1583 to 1589 as a guest of the governor Wang Pan. It was here that Ricci produced the first Chinese-Language map based on European geographical knowledge, called 'Complete Map of the Great World' (Da Ying Quan Tu, 大瀛全圖). Ricci and Ruggieri also compiled the first dictionary of Chinese in any European language. He would become the first European to enter the Forbidden City of Beijing in 1601 when invited by the Wanli Emperor, who sought his services in matters such as court astronomy and calendrical science. Learn More...