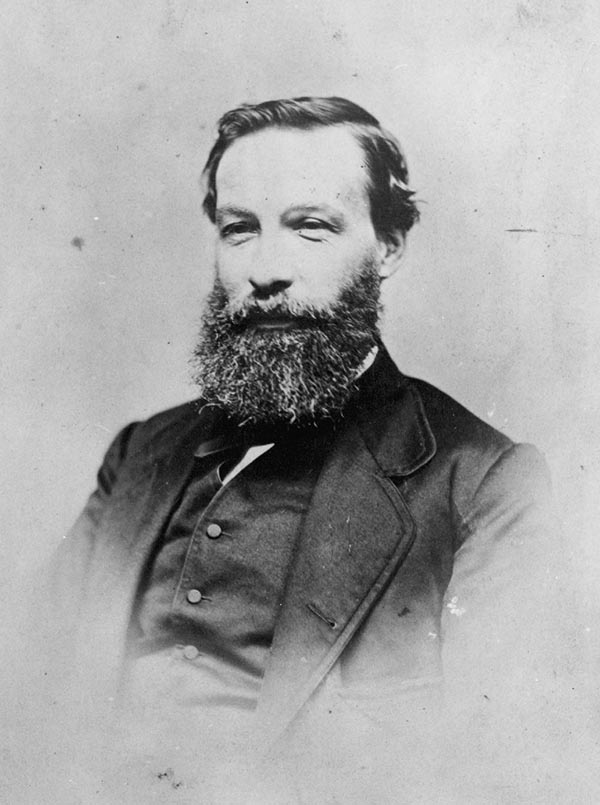 Thomas Stevens (1828 - October 24, 1888) was a British weaver who is most famous for inventing the stevenograph, a woven silk picture. Born in Foleshill, north of Coventry, England, Stevens lived in Coventry for most of his life. Coventry was the center of the ribbon weaving industry, and Stevens worked for Pears and Franklin, a local ribbon weaving firm, as a youth before opening his own ribbon weaving company in 1854. However, after the signing of the Cobden-Chevalier Treaty in 1860 which introduced free trade into the industry, the local ribbon economy collapsed, which in turn led to massive unemployment in Coventry. Stevens responded to the crisis by taking advantage of his experience experimenting with Jacquard looms and began creating new products. He devised a way of programming the looms to create colorful pictures out of woven silk. He had developed four designed by 1862 and began selling the products between six pence and fifteen shillings each in an attempt to appeal to the mass market. He was calling his creations 'Stevengraphs' by 1875. He moved to London in 1878, and began mounting Stevengraphs as pictures. His works were exhibited in the United States, Holland, and France, and won numerous awards. He had developed over 900 designs by the late 1880s. Stevens died in 1888 following a throat operation. The firm continued operating after Stevens death under the leadership of one of his sons, Thomas Inger Stevens, until his death in 1908. After Thomas Inger Stevens passed away, the firm became a limited corporation and production continued until 1940, when bombs dropped by the Luftwaffe destroyed its factory in Coventry.