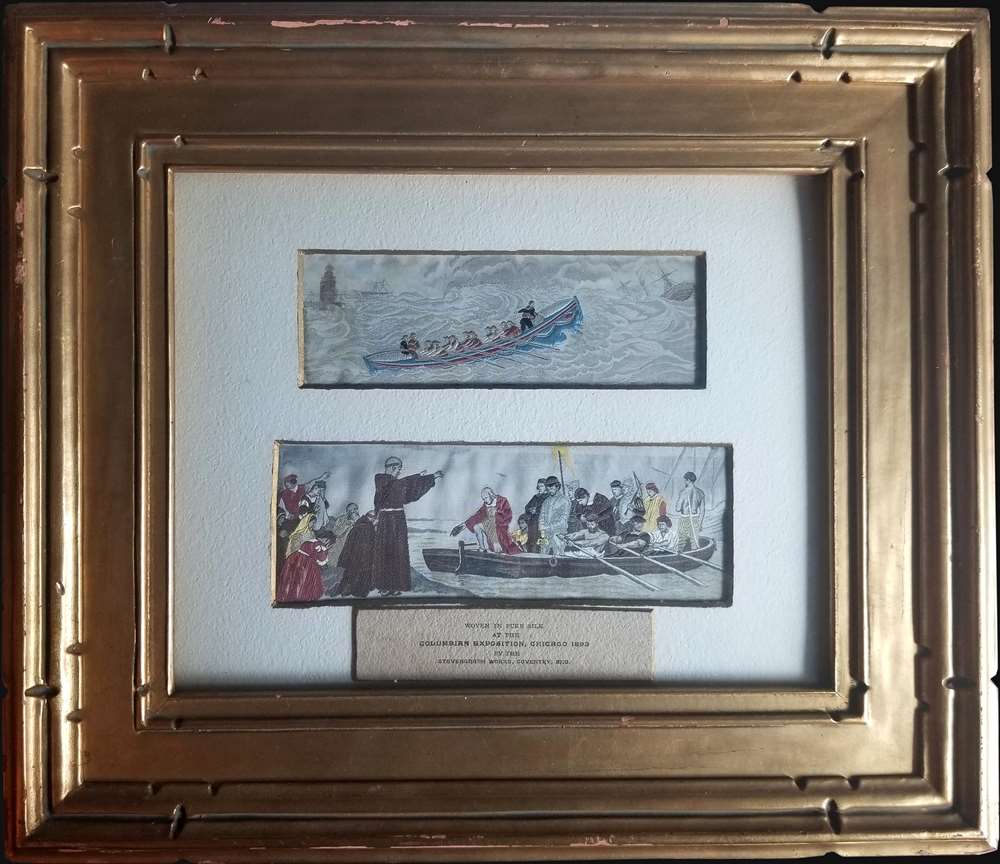 Two rare silk woven Stevengraphs with original board and frame.
$950.00

This is a pair of 1893 silk 'Stevengraphs' weaved at the 1893 Chicago World's Fair Columbian Exposition. The views present maritime themes, although the similarity between the two ends with the rowboats.

Called to the Rescue. Heroism at Sea

The first of the two Stevengraphs illustrates a rowboat full of men heading out to sea during a storm to rescue the crew of a sinking ship. A lighthouse occupies a point along the left border, and the bright blue longboat combats the rough seas to reach the doomed vessel. Two different editions of this Stevengraph were created, one using gray silk for the sea and the other using green silk.

The second of the two Stevengraphs, entitled 'Columbus Leaving Spain,' depicts Columbus kneeling in a rowboat to receive a monk's blessing. Members of his crew bow their heads or remove their hats in reverence, hoping for a safe return. Women on the shore who came to see them off fall to their knees weeping, likely fearing for the lives of their husbands or lovers.

Editions of 'Called to the Rescue. Heroism at Sea' began appearing as early as 1880. We have located examples in the collections at the Ohio History Connection Museum and the Yale Center for British Art, both of which are cataloged as dating from 1880. It is scarce in the private market. We have been unable to locate any other known examples from the 1893 Columbian Exposition. 'Columbus Leaving Spain' is not cataloged in OCLC and scarcely appears on the private market.