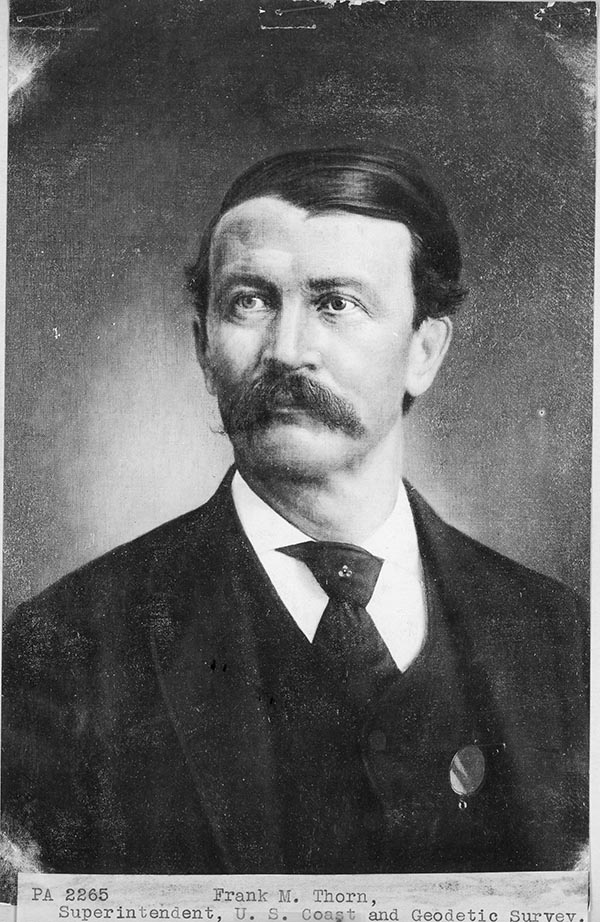 Frank Manly Thorn (December 7, 1836 - 1907) was an American businessman, politician, and lawyer who served as the sixth Superintendent of the Coast and Geodetic Survey who holds the distinction of being the first non-scientist to hold the position. Born in Erie County, New York, near Buffalo, Thorn attended local schools and then the Fredonia Academy in Fredonia, New York. After graduating, he returned to Erie County where he served as a clerk in Surrogate's Court, where his father, a trained lawyer, served as Surrogate Judge. Soon Thorn was enrolled in law school in Albany, New York and eventually became a licensed lawyer himself. This, however, was essentially the end of his legal career. Thorn moved to Pennsylvania in 1860, where he began work in the petroleum industry. In 1867, after the Civil War, he moved back to Erie County and started working in the legal profession, while at the some time establishing a successful fruit orchard and farm. He also began writing and publishing humorous sketches in local newspapers under pseudonyms and performing as an after-dinner speaker and humorist lecturer, ventures at which he apparently had some success. Thorn began his political career in 1870 when he was elected to the Erie County Board of Supervisors, a position he held until 1880. In 1882, Thorn joined Grover Cleveland's successful campaign for Governor of New York and two years later campaigned for Cleveland in his bid for the presidency. Cleveland won the 1884 Presidential Election, and, only a few months later, Cleveland named Thorn Superintendent of the Coast and Geodetic Survey. Thorn replaced Julius Hilgard, who had been forced to resign in disgrace after James Q. Chenowith and the Allison Commission found him to be a drunkard and unable to lead the Survey. In 1889, after Cleveland lost the 1888 Presidential Election, Thorn was replaced as Superintendent by Thomas C. Mendenhall. After leaving office, Thorn returned to his farm in Orchard Park, New York, where he resumed life as a gentleman farmer and public figure.