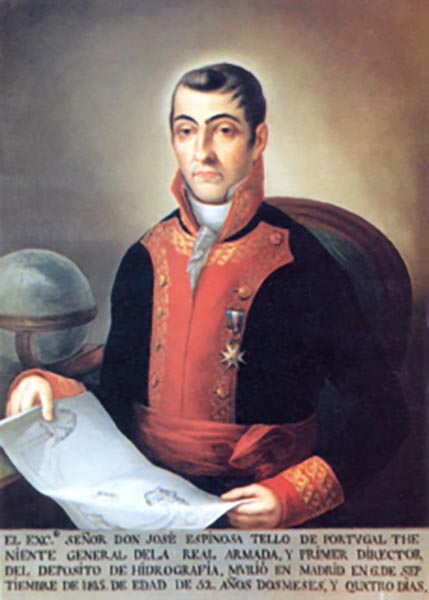 José Espinosa y Tello (March 25, 1763 - September 8, 1815) was a Spanish nobleman, naval officer, cartographer, hydrographer, and astronomer. Espinosa y Tello was born in Seville, Spain, the son of Miguel Espinosa, Count del Águila, and Isabel María Tello of Portugal. He studied astronomy at the Observatory of Cadiz and hydrography under the great Spanish chartmaker Vicente Tofiño (1732 - 1795) mapping the coasts of Spain. In 1790 he was in Acapulco, Mexico, where he met and joined the Alejandro Malaspina (1754-1809) 1789 to 1794 scientific expedition around the world. After the expedition he served as Assistant of José de Mazarredo of the Dirección General de la Armada and from 1797 headed the Dirección de Hidrografía. Following the Napoleonic Wars he was dispatched to London to manage the compilation and printing of new Spanish nautical charts. On his return to Madrid he was put in charge of the Depósito Hidrográfico. He died there in 1815.