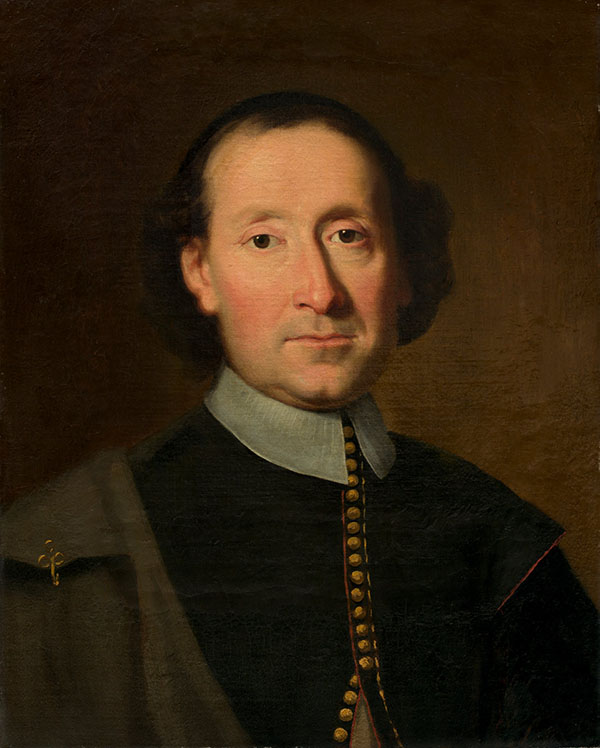 Adriaen Cornelissen van der Donck (c.1618 – 1655) was a Dutch lawyer, schout (attorney-general,) author, and political gadfly active in New Netherland during Pieter Stuyvesant's tenure as. Van der Donck's noble honorific, Jonkheer gives the city of Yonkers its name. He was an active promoter of immigration to the colony, and his Description of New Netherland would provide the fullest available account of the colony, its geography, and the Native American peoples inhabiting it. Van der Donck's political campaigning against Stuyvesant (and the Dutch West India Company) ]would result, incidentally, in some of the most long-lived and influential cartographic representations of the New Netherland colony to be produced in the seventeenth century.

Van der Donck was born in Breda in the southern Netherlands to a prosperous and well connected family: he studied civil and canon law at the University of Leiden. Upon receiving his degrees he entered the service of the patroon Kiliaen van Rensselaer, securing a post as schout in the patroonship of Rensselaerswijck (near modern Albany.) Van der Donck sailed for his new home in 1641. Almost immediately, his interpretation of his duties began to conflict with those of the Patroon - rather than serving as Van Rensselaer's enforcer, van der Donck increasingly worked to advocate for colonists and their interests. He also developed relations with the Native inhabitants, learning their language and recording their customs. When its term expired in 1644, Van der Donck's contract with Van Rensselaer was not renewed. Relocating to New Amsterdam, van der Donck would lend his assistance to then-Director-General Willem Kieft in his efforts to negotiate peace with the Lenape and Wappinger Indians. In return, Kieft granted van der Donck 24,000 acres in the area of modern day Yonkers, where van der Donck would establish his estate of Colen Donck. Far from being made an ally, van der Donck covertly undertook a campaign against Kieft to make a case for the creation in New Netherland of a local, representative government based on the Dutch model. The campaign succeeded in Kieft's removal, but rather than establishing representative government, the company decided to install a strong man to stamp out dissent, in the person of Peter Stuyvesant. Dutch tradition prevented Stuyvesant from achieving pure autocracy: he was compelled to accept the creation of an advisory board - the Nine Men - among whom Van der Donck would become a leader. His efforts to give voice to colonial grievances against the West India Company, Kieft, and Stuyvesant would result in van der Donck's house arrest and removal from the Nine Men. Nevertheless, he was among the three men chosen to sail to the Netherlands to petition the States General with the case that the valuable colony stood in danger of being lost due to Dutch West India Company mismanagement. In the Netherlands, van der Donck's campaigns would result in the publication of pamphlets (notably his 1650 Remonstrance) and in the production of the seminal Jansson 'Prototype' map of New Netherland and the so-called 'Visscher view' of Manhattan. Van der Donck's efforts were at first successful - in 1652 the West India Company was ordered to create a more liberal, municipal government to encourage emigration and to recall Stuyvesant to the Netherlands, which van der Donck was to personally deliver to the Director-General. Before van der Donck could board ship, the First Anglo-Dutch War broke out. The States General, wishing to lose neither a Stuyvesant nor the West India Company in a time of war, rescinded their decision; van der Donck was refused passage back to New Netherland. Prevented from his return, he instead took a further law degree at Leiden and wrote a new, comprehensive description of New Netherland, further promoting the colony. (He completed the work in 1653, but it would not be published until 1655 on account of the war.) Van der Donck was not permitted to return to New Netherland until May 26, 1653 on the condition he retire from public life; he appears also to have been prevented from actively practicing the law. The particulars of his death are not known. He was alive in the summer of 1655; by January of 1656 he was referred to as deceased. It is known that his estate was among those raided during the September 1655 'Peach Tree War' and it is possible that he was killed in the violence.