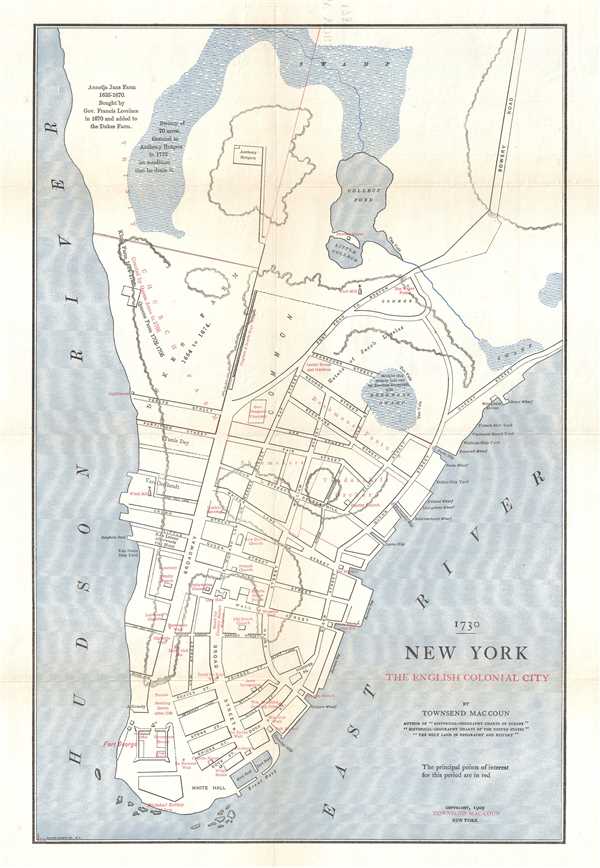 Highlights New York's ascendence as a center of global trade.
$550.00

This is a 1909 Townsend MacCoun city map of plan of colonial New York City as it was in 1730. Focused on the southern tip of Manhattan, the map depicts the region from the Hudson River to the East River and from Midtown to the Battery. By 1730, New York had grown into a small city with important commercial interests. The numerous wharves along the East River, which are identified by name, highlight New York's burgeoning trade with far-flung locations. The city's expansion is also highlighted by MacCoun himself through the use of red lettering to mark important points of interest. The country's first synagogue, located on Mill Street, is labeled, as is William Bradford's printing press (New York's first), and the newly-constructed City Hall. Byard's Sugar House, New York's first sugar refinery, is also noted, as are several markets, underlining the idea that New Yorkers no longer sourced their own food but purchased it from someone. The idea that the city could expand through obstacles instead of around them is also apparent, as MacCoun references that the swamp north of the city was granted to Anthony Rutgers, on the condition that he drain it. New York's advance toward its worldwide fame is presented here by MacCoun, though, at the time, New York was smaller than both Philadelphia and Boston.

This map was created by Townsend MacCoun and published in 1909.

Townsend MacCoun (1845 - September 10, 1932) was an American cartographer, publisher and historian active in the second half of the 19th and early 20th centuries. Townsend was born in Troy, New York, the son of John T. MacCoun and Angelica Rachel Douw (Lane) MacCoun. MacCoun attended Williams Collage, from which he was awarded degrees in 1866 and 1869. His composed several cultural and geographical works, including a history of the United States, another of the Holy Land, and a series of five historical maps of New York City. He also developed and proselytized employing a universal color coding system in all maps appearing in a single book or book series - a technique that remains in use today in many text books. He was a member of the Chi Psi Fraternity, the American Geographical Society, and the Paris Société Academique d'Histoire Internationale. Learn More...