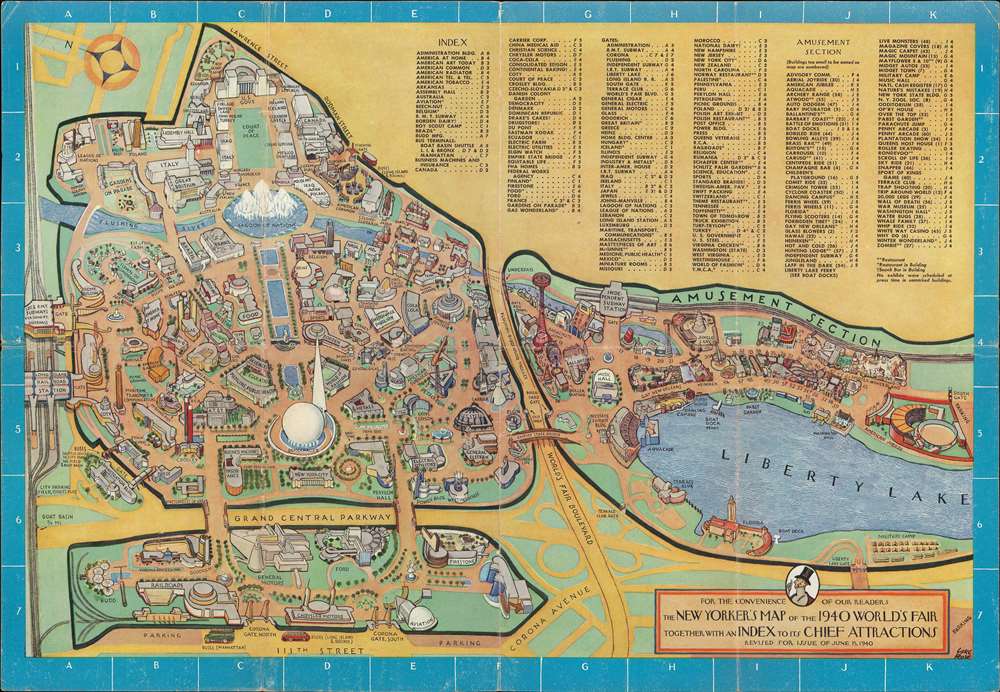 This is a 1940 Carl Rose pictorial map of the 1939-40 New York World's Fair created for The New Yorker. The map depicts the fairgrounds, which were in today's Corona Park, from the Long Island Railroad tracks to the American Jubilee and from Lawrence Street and the Boy Scout Camp to the Transportation section and 111th Street. The focus of the map is the Trylon and Perisphere, the symbol of the World's Fair, and the Lagoon of Nations along the Flushing River. Pavilions, attractions, and restaurants throughout the fair are illustrated in profile and labeled. Most of the government and national pavilions are situated near the top of the fairgrounds around the Court of Peace, while pavilions dedicated to American industries and companies were built throughout the left half of the fair. Some pavilions focused on a theme, such as gas, religion, American Art, sports, science, and public health. Other buildings were erected by corporations, such as AT and T, Coca-Cola, DuPont, Eastman Kodak, General Motors, and Ford. The right portion of the map is dedicated to the Attraction section, which featured the popular Aquacade, Jungle Land, two penny arcades, bowling alleys, and numerous other amusements. Both the I.R.T. Subway and the B.M.T. Subway stations are noted. An index of all the sites throughout the fair is situated along the top border. The title cartouche, situated in the lower right corner, features a portrait of the dandy Eustace Tilly, a drawing by Rea Irvin that appeared on the cover of the first issue and symbolized the magazine ever since.

This map was created by Carl Rose and published in the June 15, 1940 issue of The New Yorker. Although this map must have been printed in some volume, we have been unable to locate any other known examples.

Carl Rose (1903 – 1971) was an American cartoonist. Rose's work appeared in numerous very successful publications including The New Yorker, The Saturday Evening Post, and Popular Science. In 1958, the National Cartoonists Society awarded him their Advertising and Illustration Award. Learn More...

Very good. Even overall toning. Wear along original fold lines. Text on verso.
Looking for a high-resolution scan of this?