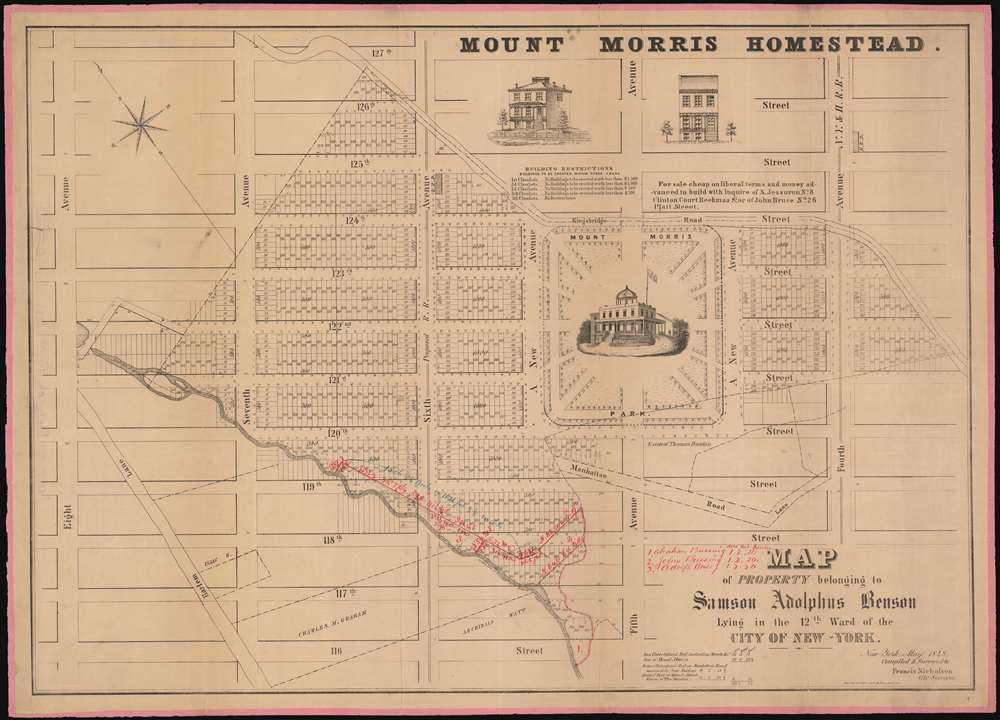 Highlights Mount Morris Park, which hosted the Harlem Cultural Festival, known as the Black Woodstock, in 1969.
$3,500.00

A fine example Francis Nicholson's rare 1848 cadastral map of the Mount Morris Park historic district - the only specific map of this area to appear in the 19th century. The map depicts the region from Eighth Avenue to Fourth Avenue and from 127th Street to 116th Street. Streets and avenues are identified and all the buildings and city blocks are numbered. Harlem Creek, which has long since been buried under the development of Manhattan, is illustrated. Manuscript notations in red ink illustrate the land holdings of Abraham Bussing, John Bussing, and Adolph Bussing.

Mount Morris Park, today known as Marcus Garvey Park, is situated just to the right of center. The park interrupts 5th Avenue, because a large 70-foot-high outcropping of schist occupies that patch of land and city builders elected to leave it instead of trying to blast it. The outcropping, originally known as 'Snake Hill' because of the local inhabitants, hosted a Hessian battery during the Revolutionary War and, in the summer of 1969, hosted the Harlem Cultural Festival, which has become known as the 'Black Woodstock'. Today the area around Mount Morris Park is admired for its stunning 19th century brownstones and is one of the most beautiful and desirable neighborhoods in Harlem.

This map was created by Francis Nicholson and published after his death in 1848. It is of considerable rarity. The OCLC identifies only one example at the New York Historical Society and we are aware of another example at the Museum of the City of New York.