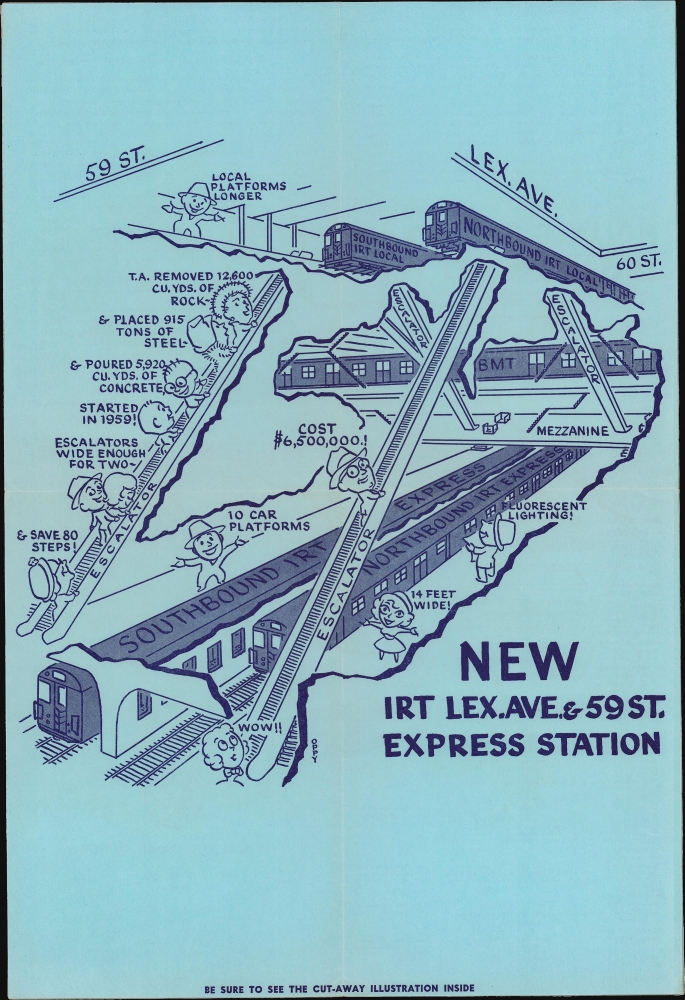 This is a 1962 New York City Transit Authority cut-away map of the just-opened 59th Street Express subway station, part of the original program for the inaugural ceremonies of that station. One of the most frequented stations on the Lexington Avenue line, the illustration encompasses three levels, 'express' escalators, transfer ramps, and a whole world of newer, faster, transit.

The verso text promotes the accomplishment of building the station and its many new amenities.

For the first time since the line was built more than 44 years ago, passengers riding locals on the IRT Lexington Avenue line will hear the conductor announce '59th Street station - change here for the express, please'. The new service goes into effect on Nov. 15, 1962.

After 44 years, the 59th Street station, fourth busiest of the 23 Lexington Avenue line stations in Manhattan, has become an express stop. Approximately 11,000,000 fares were collected at this station during the fiscal year ended June 30, 1962, an increase of about a half million fares over the 1961 period. Millions of other passengers used this station as a transfer point to and from Queens.

The complex work of carving an express station out of rock some 73 feel below Lexington Avenue at 59th Street was begun on August 10, 1959. Two platforms, each 14 feet wide and 525 feet long, on the northbound and southbound sides of the existing express track, were cut out of rock.

Taking over three years to build, the new mezzanine and express station was finished three months sooner than the estimated contract time. Approximately 12,600 cubic yards of rock were chiseled out and removed in order to provide space to build the new structures. Over 5,920 cubic yards of concrete and 915 tons of steel went into the building of the facilities.

The Lexington and 59th Street station remains one of the most heavily trafficked station in the New York City subway system.

This piece was created and published by the New York City Transit Authority for the inaugural ceremonies of the 59th Street express station on Thursday, November 15, 1962. We have been unable to locate any other surviving examples making this a unique piece of New York City history.

Very good. Light wear and toning along original fold lines. Text on verso.
Looking for a high-resolution scan of this?