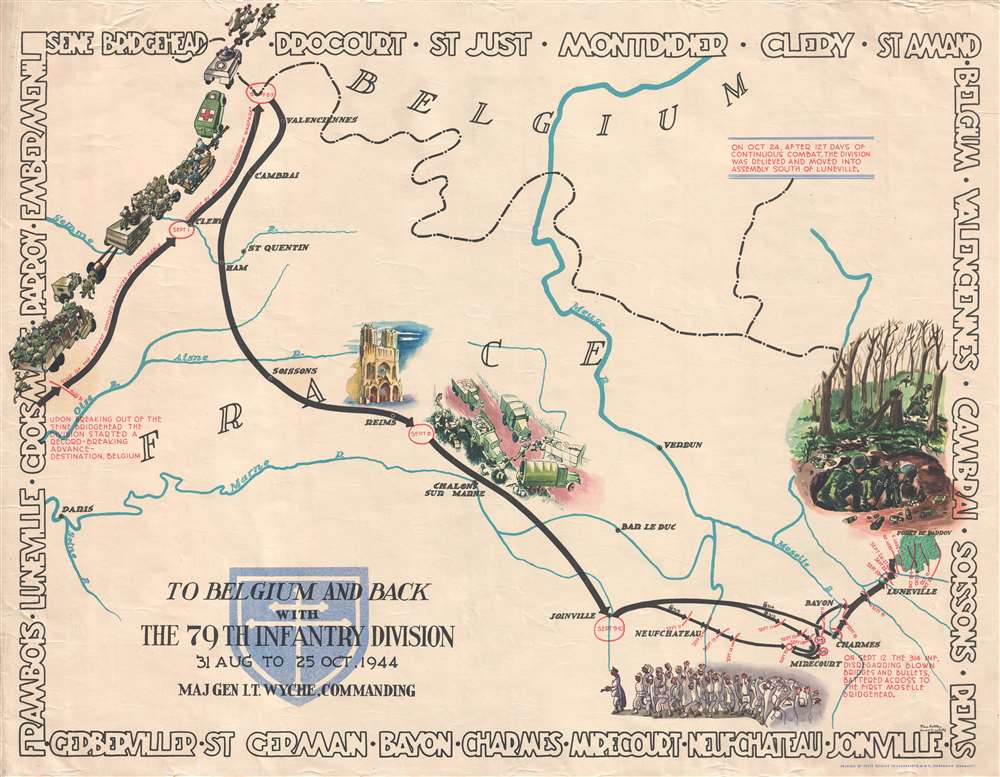 Illustrates the advance of the 79th Infantry Division across eastern France.
$550.00

This is a 1945 Steve Kaliher and Harry D. White pictorial map of the 79th Infantry Division's route through eastern France from north of Paris near the Oise River to the Parroy Forest. The second in a series of four maps depicting the division's advance through Europe after the Allied invasion, this map follows the division's movements from August 31 until October 25, 1944, when the division was pulled off the combat line for rest and training. Solid black arrows trace the division's progress, with red lettering indicating the date (or dates) spent in a specific location.

A Look at the 79th Division's Advance

Text along the left border states that, following the division's successful breakout from the Seine bridgehead near Mantes Gassicourt, it began a 'record-breaking' advance toward the Franco-Belgian border, which, per the map, was deemed 'one of the fasted opposed advances of comparable distance by an infantry division in wartime'. The divisions momentum was slowed, however, upon reaching St. Amand, on the Belgian border, where they encountered stiff resistance. They then turned south, through Valenciennes, Reims, and Neufchateau, until they again encountered fierce resistance at Charmes, where they fought street by street. Here they managed to secure yet another bridgehead, this time across the Moselle River, that allowed the Allied advance to continue east. They then proceeded to the Parroy Forest, where they fought one last intense engagement before being pulled off the line on October 24.

Numerous cities, towns, and villages are labeled throughout, allowing the viewer to orient themselves to what part of France the 79th Division is liberating, some of which would have been familiar to World War I veterans, like Verdun. Several rivers, including the Oise, Aisne, Somme, Meuse, and Marne are labeled The Reims Cathedral is beautifully illustrated, adding a different dimension to the reality of the speedy advance through the French countryside. A column of American troops, complete with howitzers and tanks, is illustrated in the upper left corner, chasing German troops into Belgium, while along the drive to Charmes, a supply dump is included. Soldiers are drawn sprinting between several different trucks, trying to grab everything needed by their units. The fierce fighting in the Parroy Forest is shown along the right border. Trees are snapped in two, some soldiers are hiding behind still standing trees, and the two men in the foreground, in their foxhole, are operating a mortar, with spent shell casing strewn around their position. The whole is surrounded by the names of the towns through which the 79th traveled, among these are Valenciennes, Cambrai, Soissons, Reims, Charmes, and Luneville.

This map was created by Steve Kaliher and Harry D. White and printed by Fritz Busche Druckereiges M.B.H. in Germany in 1945.