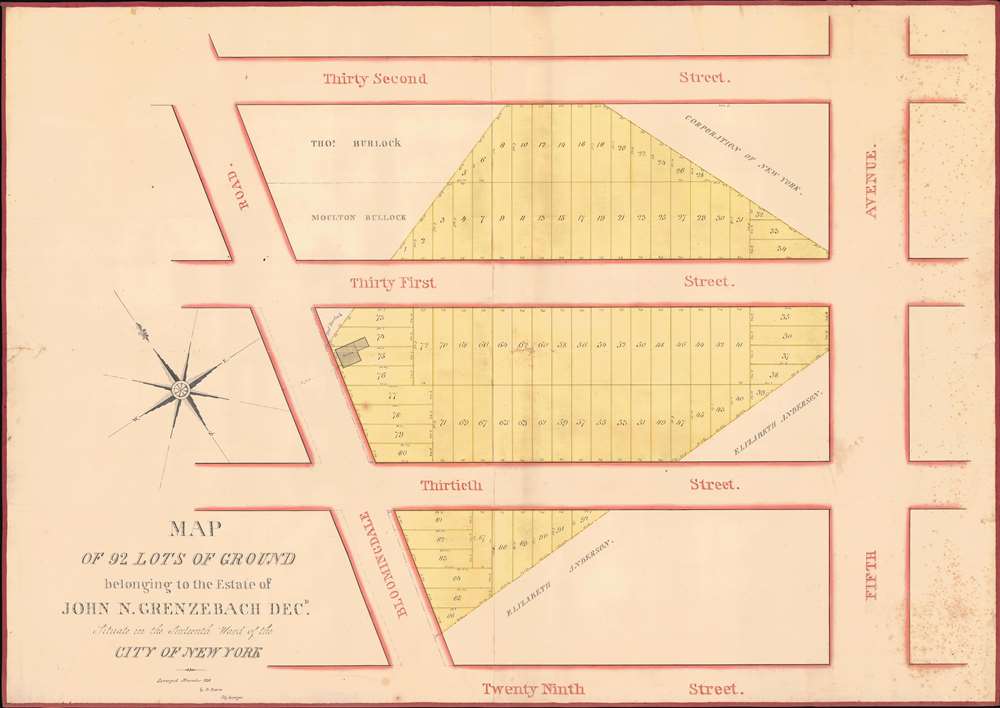 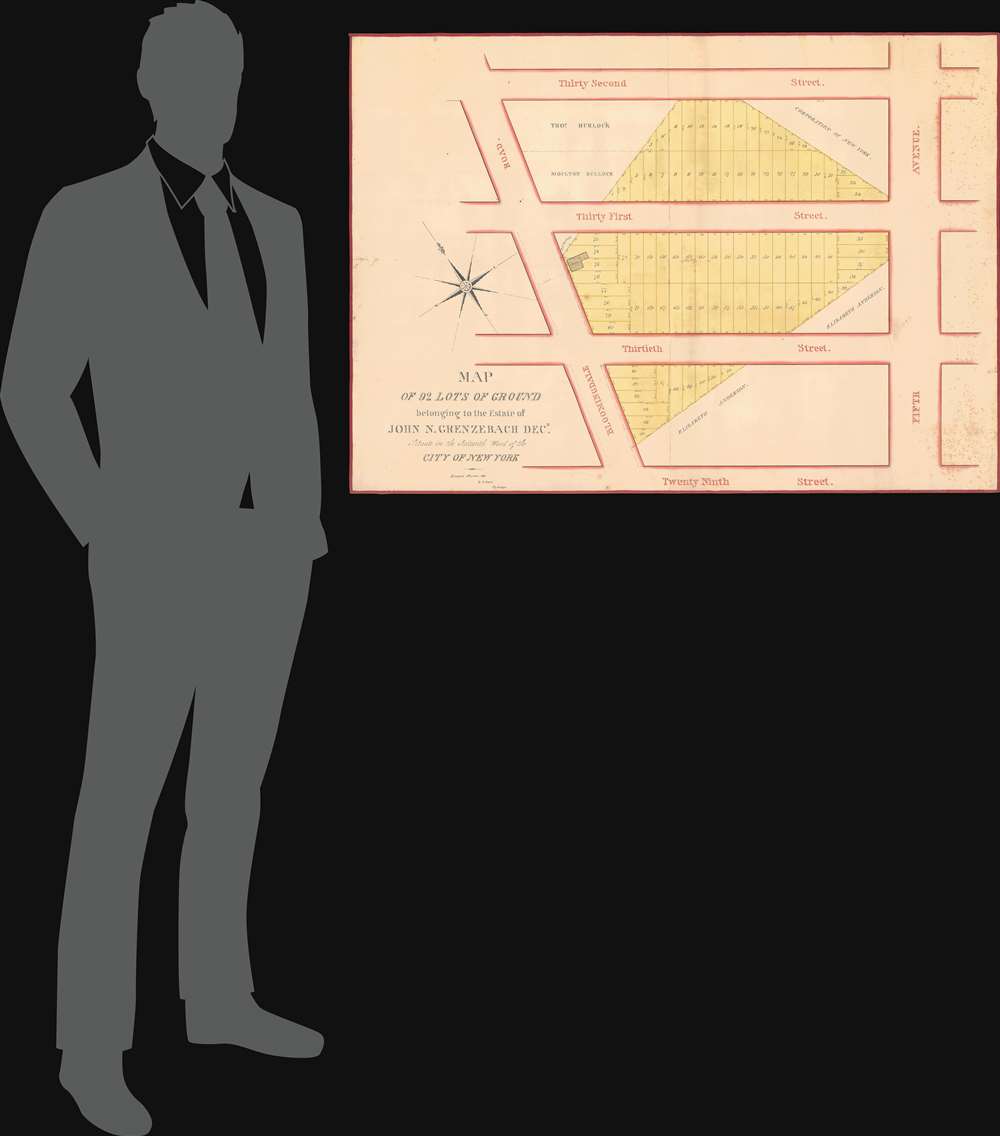 This is a finely executed 1838 Daniel Ewen manuscript map capturing the early evolution of NoMad and Koreatown, Manhattan, New York City. Today, this area is one of the most vibrant parts of New York, known for its bustling Koreatown and sleek restaurants. When this map was drawn, these properties were in the process of being broken out of the John Nicholas Grenzebach estate and lotted for sale.

Coverage extends from Thirty-Second Street to Twenty-Ninth Street and from Bloomingdale Road (Broadway) to Fifth Avenue. The surveyor and draftsman, Ewen, delineates 92 lots carved out the estate of John Nicholas Grenzebach (1754 - 1838), each numerically identified with dimensions. A manor house, constructed by Caspar Samler for Grezenbach's wife Margaret Dean, appears along Bloomingdale Road between Thirtieth and Thirty-First Streets.

This area represented one of several estates owned by J. N. Grenzebach. From about 1800, this area was generally known as the Caspar Samler Farm, originally encompassing a tract of thirty-seven acres roughly embracing modern day Broadway to Park Avenue, from Twenty-eighth to thirty-second streets. Samler (17?? - 1810) acquired the farm in pieces from the City Common Lands between 1780 and 1799. He built three large manor houses - one for each of his daughters. All three Samler manors are noted on the 1811 Commissioners Plan - at the center of the 'Parade' (see below). One of those properties is noted here in lots 74, 75, and 76. When Samler died in 1810, the central property and manor was transferred to his stepdaughter, Margaret Dean (1771 - 1826), who in 1791 married John N. Grenzebach, taking his name. The Samler Farm was subsequently locked in litigation for several years, but ultimately, part of it was transferred to Grenzebach. Shortly after Grenzebach's 1838 death, the estate was surveyed and divided into lots - as here. This real estate was particularly valuable, as the Legislature had just determined to make Bloomingdale Road a major 75-foot-wide continuation of Broadway - as noted here. The lots were offered at public auction on January 10, 1839 by James Bleeker, auctioneer.

In the 1811 Commissioners Plan this entire area, and indeed, Samler's full holdings, were reserved for public lands known as 'The Parade', a 240-acre park for military exercises between Twenty-Third and Thirty-Fourth Streets and Third and Seventh Avenues. In 1814, The Parade was reduced to ninety acres by an avenue on each side and three blocks on top. The continual push for more real estate and development eliminated The Parade entirely by 1829. Streets and Fifth Avenue were drawn over The Parade on maps, as if it never had existed. Nonetheless, part of The Parade reappeared in 1837 as Madison Square, occupying seven undeveloped acres.

John Nicholas Grenzebach (1753 - February 9, 1838) was born in Hesse-Cassel, Germany and arrived in New York City a few years after the end of the American Revolution (1775 - 1783). Grenzebach opened a grocery business at the corner of Broadway and Wall Street around 1789, not far from Federal Hall, where George Washington was inaugurated as the first President of the United States that same year. He married Margaret Dean on September 21, 1791, and became a naturalized American citizen on August 7, 1793. He moved his grocery to the corner of Chatham Street (modern-day Park Row) and Frankfort Street around 1794. Over time, he bought adjoining lots, and eventually owned the entire corner property (seventy-three feet on Chatham Street and eighty feet on Frankfort Street). Grenzebach bought Lot 190 in the Common Lands (between Third and Fourth (Park) Avenues and East 75th and East 76th Streets) and built a house on the property. He leased Lots 189 and 191 from the city a few years later but was never able to buy them from the city outright. Grenzebach died on February 9, 1838, at age 85. All his property was auctioned off after his death.

This map was drawn by Daniel Ewen in 1838. As this is a manuscript map, this piece represents a unique glimpse into New York City history that will make an incredible addition to any collection, particularly those interested in the creation of New York City's iconic grid.