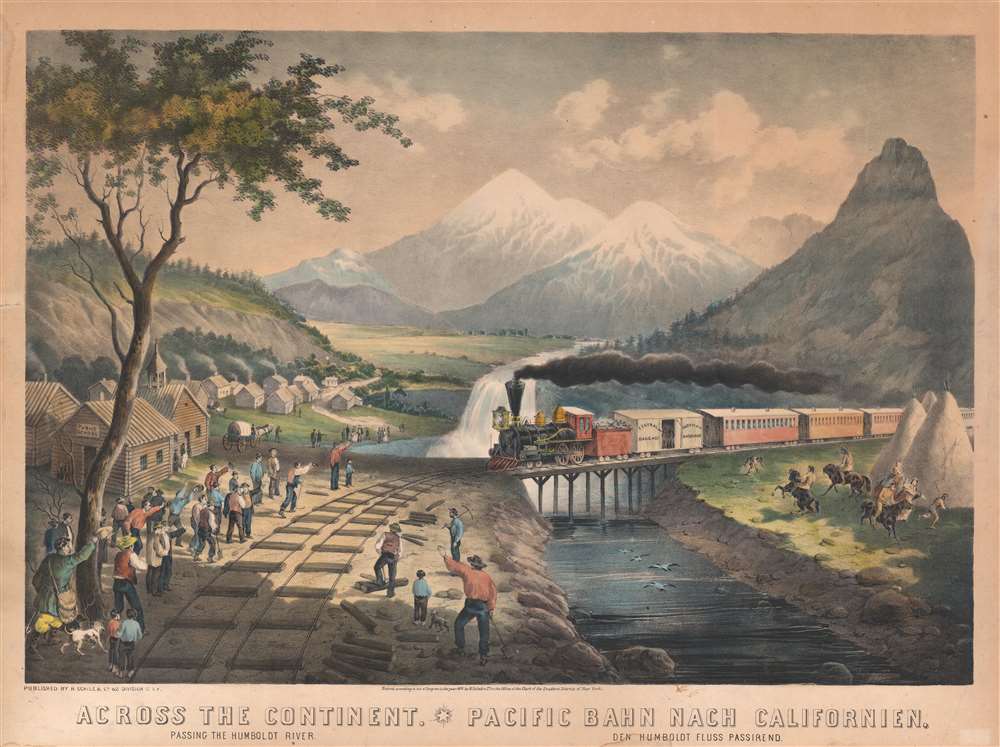 Celebrating the completion of the Central Pacific Railroad!
$6,500.00

A rare iconic 1870 H. J. Schile lithograph view illustrating the Central Pacific Railroad crossing the Humboldt River, likely near Wells, Nevada. The view celebrates the exoticism and wonder of the American West, capitalizing on general enthusiasm for the Pacific Railroad and the potential of the West in general. Shortly before this view was issued, in 1869, the Central Pacific Railroad reached Humboldt Wells (modern day Wells), which was established as a division point and terminal and quickly took on iconic stats as a major transition point to the greater west.

The Central Pacific Railroad takes center stage. In the foreground to the left, villagers and railroad workers eagerly celebrate the train's arrival. On the right, teepees and American Indians, likely Shoshone, rightly observe the train's arrival with greater trepidation - women and children flee, while horses prance and buck nervously. In the background dramatic mountain peaks rise impressively over the river plain.

The Central Pacific Railroad reached Humboldt Wells in 1869 - the year that also marked the completion of America's first transcontinental railroad. With an excellent fresh water supply and commodious situation, the site had long been a stopping point on the California Emigrant Trail - a point to rest and be refreshed before heading into the Humboldt River Basin. The 1869 arrival of the Central Pacific Railroad turned the emigrant encampment into a small town and switch station - as shown here. It also marked the beginning of greater regional development wherein extensive stretches of the Humboldt Basin were set aside for ranching, agriculture, and public domain range land.

This view was engraved and published in New York by Henry Jerome Schile and is widely consider his finest work. There is only one state of the view, published in 1870, but there are two variants. Schile developed the convention of cutting out the view and mounting it on decorative black board. The present example represents the more traditional view format with full original margins and titling. The view is rare. It is represented in a few institutional collections focusing on Western Americana, but is uncommon on the market.

Henry Jerome Schile (September 30, 1829 - October 12, 1901), also spelled Schiele, was a German-American lithographer active in New York during the mid-19th century. Schille was born in Oberharmersbach, Ortenaukreis, Baden-Württemberg, Germany. He was a 48er, having fled Germany in the wake of the failed 1848 Springtime of the Peoples Revolutions. He arrived in the United States in 1852. He seems to have been trained as a carpenter and framer rather than an engraver or lithographic printer. His first appearance in the census, 1860, identifies him as a 'gilder'. From around 1870, he established himself as a framer and printer, issuing lithograph views and advertisements. His work was particularly popular among Germany brewers, who used him extensively for large bold beer advertising. Henry Schile's work is described by Harry T. Peters in America on Stone,

Though often German in source or character, often bearing titles in foreign languages, for the convenience of immigrants, and invariably and outrageously crude in conception, composition, drawing, and lithography, Schile's prints are undoubtedly American in spirit, because they so vividly represent the ‘melting pot’ from which they came and for which they were made. …

Schile is criticized by some for the crudity of his work, with 'Across the Continent' generally named has his finest print - however, this discounts his many striking beer advertisements and other commercial printing. Schile also developed the convention of mounting some of his images on black card, itself embellished with decorative gold highlighting - likely a legacy of his history in the framing industry, but a technique later copied by other German-American lithographers. Schile had offices at 18, 36, 56, and 62 Division Street, New York, NY. He died in New York in 1901. After his death, his substantial legacy was mired in legal disputes among his heirs. Learn More...