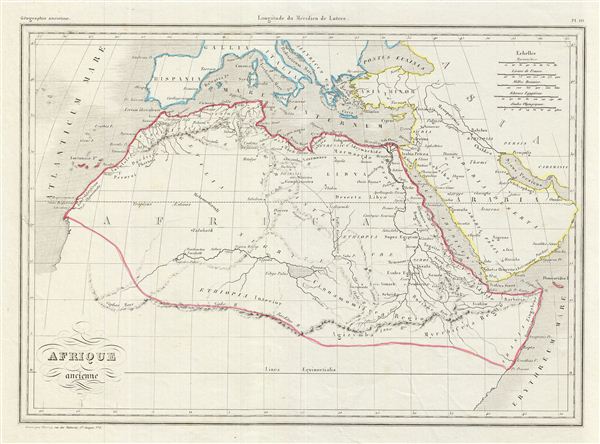 This is a fine example of Conrad Malte-Brun's 1843 map of northern Africa in ancient times. It depicts the various ancient kingdoms and offers a good detail in the deserts - some of which is entirely speculative. The ancient empires of Mauritania, Carthage, and Numidia are featured. Depicts what is today known as the Barbary Coast around 190 BC. The area contains the city of Carthage, leveled by Rome at the end of the Third Punic war. Carthage's great general Hannibal, nearly conquered Rome with his highly trained war elephants, before being turned back at the very brink of victory. Various cities, towns, rivers, islands and other topographical details are marked, with relief shown by hachure. This map was issued as plate no. 10 in Conrad Malte-Brun's 1843 Precis de la Geographie Universelle.