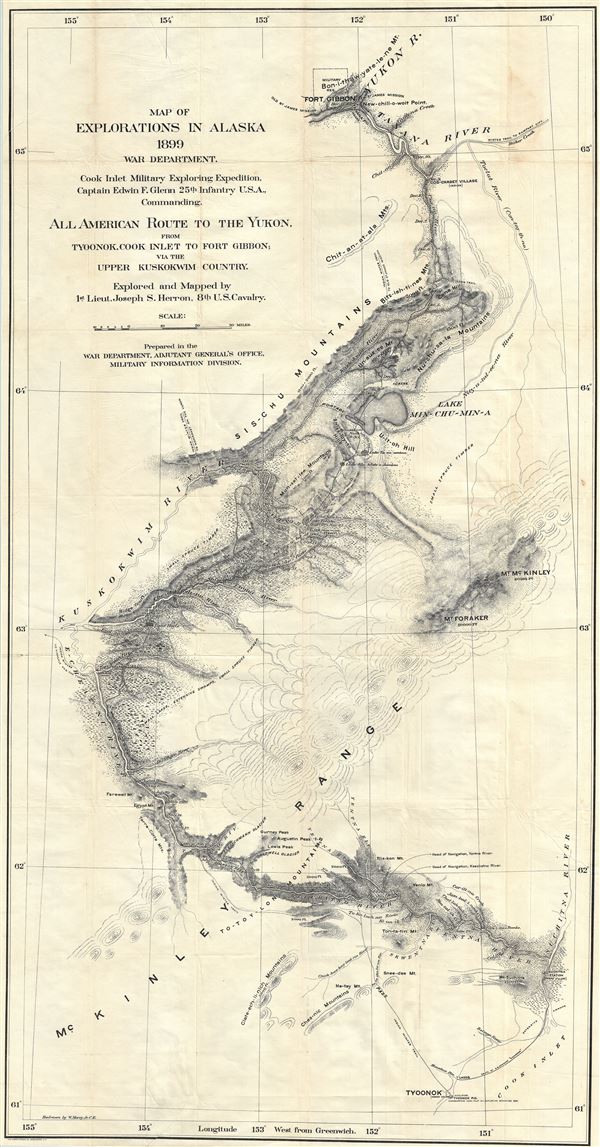 An extremely scarce 1899 Yukon Gold Rush map exhibiting an overland river route from Tyoonok, on Alaska's Cook Inlet to Fort Gibbon as mapped by Joseph S. Herron and the Cook Inlet Exploring Expedition, commanded by Captain Edwin F. Glenn. The route provides a practical overland route to the gold fields of Cape Nome and the Klondike. The map covers a route explored by Joseph S. Herron, a 1st Lieutenant if the 8th U.S. Calvary. Herron and a party of five men trail blazed this route over the course of six months and were among the first men of Europid descent to explore these remote lands. The route followed the Kichatna River, across the mountain to East Fork of the Kuskokwim, then across Lake Minchumina and through the Alaskan Range to the head of Cosna River, then downstream to Tanana River to Fort Gibbon. Their accomplishment, in the face if extreme inclement weather and heavy snow, is nothing short of remarkable. Here are a few quotes from the journals:

While in this pass I came upon two enormous brown bears, asleep … Led by the Indian Slinkta, I crawled around to the leeward, and then approached them, too near, I thought to myself, as I had a poor gun, only a few cartridges, and the nearest tree was 5 miles away. Slinkta whistled and awoke the bears, while I fired and show the larger one in the head, but only staggered him …

And not long after…

Having exhausted all their arguments to persuade me to turn back, Slinkta and Stepan, theretofore faithful and energetic, slipped out of camp, deserted, and went back to the coast … the loss of my natives was a severe blow … I proceeded, all of us redoubling our efforts…

The narrative continues along this line and makes for an exciting read. The route explored follows various rivers and indicates likely stopping points, portages, and mountain passes. As lauded by the American ethnographer James Mooney

By the new route it is possible to reach either the Cape Nome or the Klondike gold fields at any season of the year without passing through British territory, while the overland distance is shortened by one-half

We have found this map to be extremely rare with the OCLC noting only two archived examples in Alaskan collections.