1867 Hughes Map of the Empire of Alexander the Great 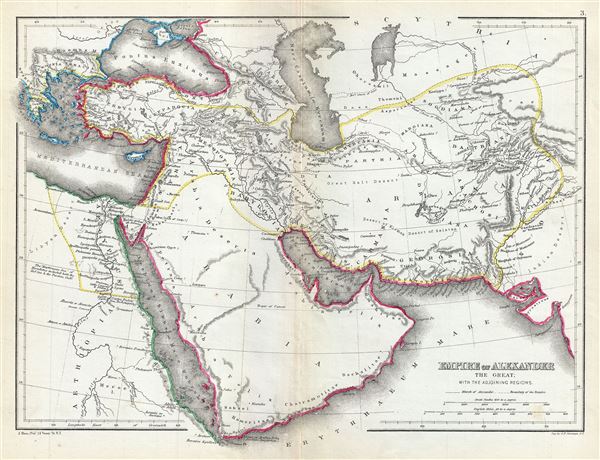 1867 Hughes Map of the Empire of Alexander the Great

This is a fine 1867 map of the Empire of Alexander the Great by William Hughes. The map depicts Alexander's conquests at their fullest extent covering from Alexander's homeland in Macedonia eastwards past Asia Minor and Persia as far as India and south to include Egypt and Arabia. Both the Caspian Sea (Mare Caspium or Hyrcanum) and the Black Sea (Pontus Euxinus) are included. The map also notes the route for the march of Alexander, inland through Gedrosia. Alexander lost a huge number of soldiers and supplies during this march through the desert.

This map depicts the conquests of the Macedonian King Alexander III, called 'The Great,' conqueror of the Persian Empire and at just 30 years old, ruler of one of the largest empires in history. Alexander the Great was undefeated in battle and is considered one of the most successful military commanders of all time.

This map was created by William Hughes, printed by J. Bien and engraved by G.E. Sherman, for issued as plate 3 in Sheldon and Company's An Atlas of Classical Geography.

Very good. Minor wear and toning along original centerfold. Minor verso repair along centerfold.
Looking for a high-resolution scan of this?