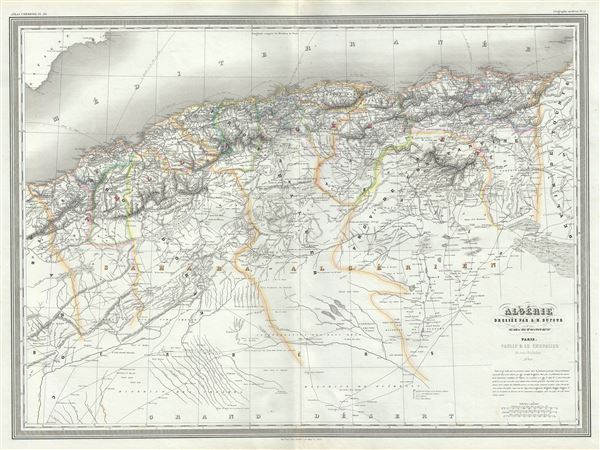 This is an extremely attractive and monumentally proportioned 1860 elephant folio map of Algeria by the French cartographer A. H. Dufour. Algeria is depicted divided into the administrative districts of Oran, Alger and Constantine with roads, rivers, caravan routes, cities, and topographical features noted throughout. It also details several nautical routes between different Algerian cities and Europe.

Long a hotbed of piracy and a center for the Slave trade, the Barbary coast, including the Maghreb, was being conquered by France as this map was drawn. Frances tenuous conquest of Tunisia and Algeria in 1830 finally ended the threat of the Barbary Corsairs. After its conquest by the French in 1830, Algeria became an attractive destination for European immigrants. However the majority indigenous Muslim population was dissatisfied with the political system. This dissatisfaction would ultimately trigger the Algerian War in 1854 and lead to Algeria's independence from France in 1862.