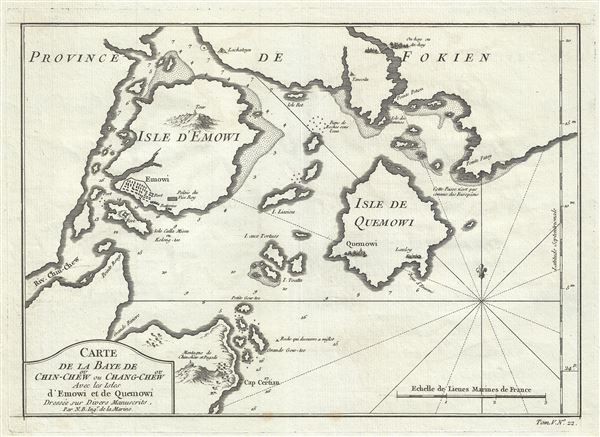 A scarce c. 1764 Nicholas Bellin nautical chart or maritime map of the Bay of Changchow (Zhangzhou), Fujian, China. The map focuses on the city of Amoy (here spelled Emowi), or modern day Xiamen. Being primarily a nautical chart, the map offers limited inland detail, but the city of Amoy (Xiamen), as well as adjacent points of interest including fortifications, palaces, pagodas, and nearby cities, are rendered pictorially. On the island itself a large mountain, most likely Xianyue Mountain, with a tower, is depicted. Xiamen or Amoy was a place of exceptional interest to European traders as China's main port for the export of tea. Later, in the 19th century, it became one of several 'Treaty Ports' open to foreign traders. Today Xiamen is considered China's 'most romantic city.' This map is very similar to another map published by Bellin and Van Schley, however features a different cartouche and is printed on thicker paper.